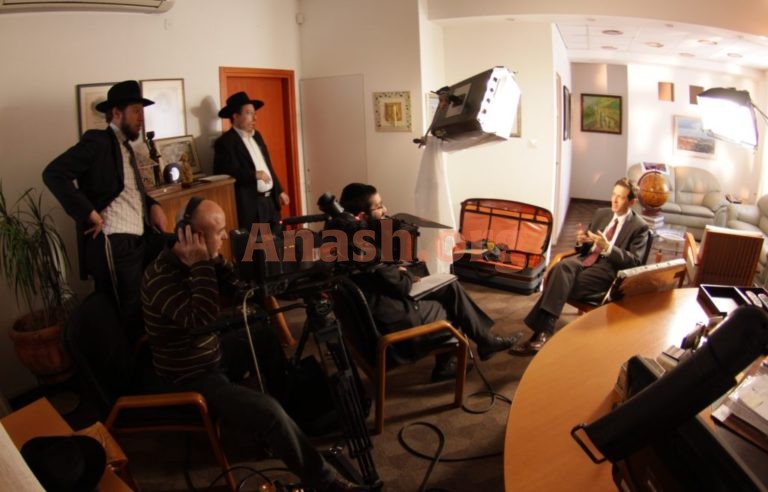 He started out as a hired cameraman for JEM’s My Encounter stories. But the impact of the firsthand accounts changed his life.

Mr. Dror Levinger is JEM’s cameraman in Israel, in charge of videoing and recording the My Encounter interviews. Although regularly behind the scenes recording others’ stories, his own is remarkable in its own right, one which highlights the impact of JEM’s holy work. He was recently interviewed by Kfar Chabad Magazine, who published his story.

Dror grew up in the 70s in a barely traditional Jerusalem home, where Judaism was not practiced bar staying away from non-kosher and reciting kiddush on Friday night. Although he had some interaction with Chabad throughout his early life, like when he was serving as a commander in the IDF, Chabad students came to Purim joy with the soldiers, and when he met the Chabad shliach in Thailand Rabbi Nechemia Wilhelm, whom he was impressed by and spent time talking to, nonetheless his own religious practice remained scarce.

He moved to Los Angeles to study cinematography for an additional four years, and while there  he would stop by the local Chabad House sometimes on festivals and Jewish holidays. Still, his religious affiliation remained at that. He was cordial and friendly to religion, but not active.

One day in 2005, after he had moved back to Israel and was in Tel Aviv, he received a call. The man at the other end introduced himself as Rabbi Yechiel Kagan, director of a certain My Encounter Project. Rabbi Kagan explained that they were traveling around Israel interviewing people and collecting their stories and experiences with the Lubavitcher Rebbe, and that they needed a cameraman.

Dror was unsure, as he had never worked with religious people before, and was unsure if it would work out. He agreed to give it a try and began traveling around with Rabbi Zusha Wolf, My Encounter’s lead Israel interviewer, interviewing, videoing, and recording people. The people came from all walks of life, from great rabbis to secular politicians, specialist doctors to school teachers, yet they all had one thing in common. They were touched deeply by the Rebbe, and had a story to tell.

Over time, Dror began to be drawn in by the stories he was hearing, and his soul was stirred. He heard about the Rebbe firsthand from countless people, and began to feel connected to him. The Rebbe’s care for every Jew, his saintly piety, and his love for our Holy Land made a massive impression of Dror. He began discussing Judaism with Rabbi Wolf between interviews, wanting to learn more about G-d, Torah, and of course the Rebbe.

He began to learn Torah on a weekly basis with a Chabad rabbi, and after hearing story after story how much tefillin meant to the Rebbe, began to lay tefillin daily.

When he traveled to New York to see 770 and visit the Rebbe’s Ohel for the first time, he finally saw all the places he had heard so much about. As well, going to the Rebbe’s Ohel touched him to the core of his being. He resolved to keep Shabbos.

Today, Dror is a religious Chabad chassid. The stories and encounters he heard firsthand working with My Encounter affected him to the point where he could not stay unaffected, and as a result today he learns chassidus, is passionate about the Rebbe, and is fully religious.

This article is based on Dror’s interview with Kfar Chabad Magazine, who recorded and published his story.

Click here for the full article by Kfar Chabad Magazine.