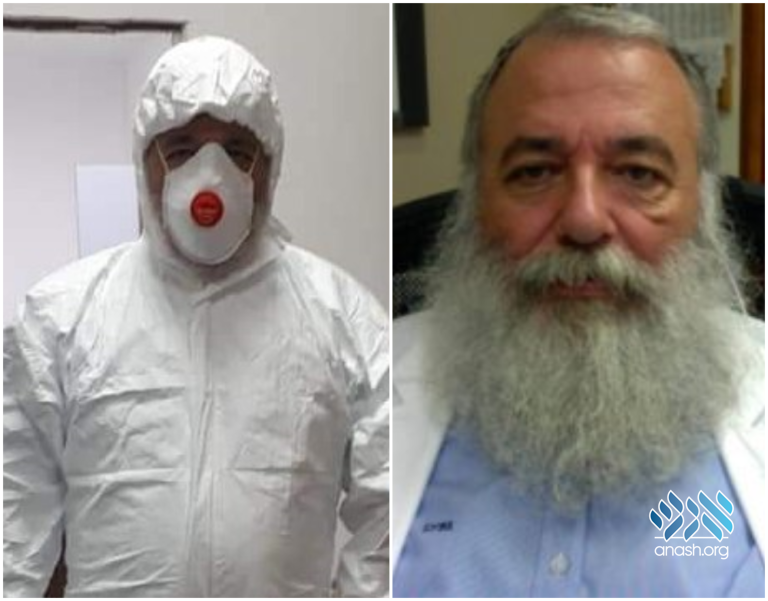 A story that will be told for generations: A Lubavitcher chossid who heads the ICU in a Bnei Brak hospital took the drastic step of cutting his beard in order to properly wear protective gear and keeps his patients safe.

“Professor” Dr. Eliyahu Sorkin is world-famous. As chief of the ICU at Ma’aynei HaYeshuah Hospital in Bnei Brak he has been in charge of the medical care of many Gedolei Yisroel in Eretz Yisroel. The Professor was even summoned to America to oversee the care of the late Vizhnitzer Rebbe of Monsey, not before receiving a direct psak that he was allowed to leave the rabbonim in his care in Bnei Brak.

A proud Lubavitcher chossid, Dr. Sorkin brings honor to the name of Lubavitch in Bnei Brak.

Now, with the coronavirus raging in densely-populated Bnei Brak, and with masks and full protective suits necessary for medical providers, he had to make a decision. At age 72, he’s at-risk himself.

Although unthinkable for a Lubavitcher Chossid, Dr. Sorkin knew that the Torah demands messiras nefesh to save another Yid, sometimes even coming at the expense of things very dear to you. After consulting Rabbonim, he trimmed his beard with tears in his eyes, knowing that by doing so, he could continue to save other’s lives.

A doctor that knows that he’s but a messenger of the Aybershter, and that Malach Michoel is at his right side, knows that the Torah is what allows him and commands him to heal the sick. There are no airs about him since he doesn’t think of himself as anything special.

If that same Torah tells him that he needs to have “Chassidishe Mesiras Nefesh” and cut his beard, so that he can heal those in his care, then he does it with the same zeal as healing. The suit and mask would protect those in other wards from contracting the disease.

So, after posing his dilemma to three Lubavitcher Rabbonim, Rav Yitzchok Y. Yeruslavsky, Rav Menachem M. Gluckowsky, and Rav Yosef Y. Belinov, he trimmed his beard so that the protective mask would fit him tightly and protect himself and the others in the hospital. It was a very tearful moment for the doctor, but it had to be done.

Sorkin continues: At his age, my father takes personal responsibility for the dozens of yidden that are in his care and offers care that is second to none. This brave step only shows his patients how far he would go to make sure that they’re safe and sound.