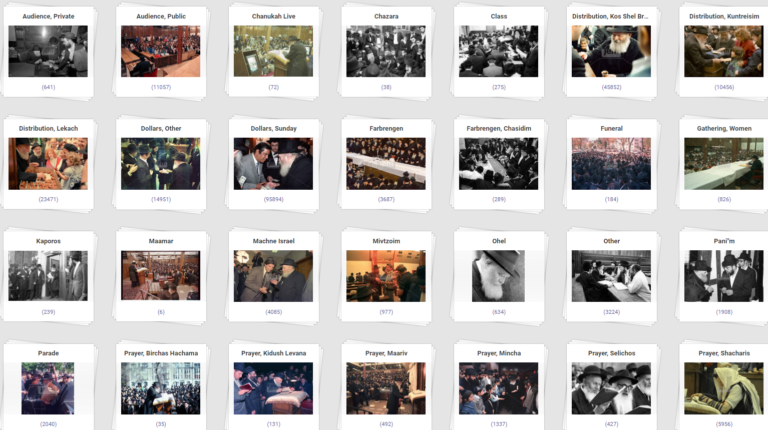 The large computer monitor on the wall flickers for a moment, and then a familiar image and voice envelop the room.

It’s the Lubavitcher Rebbe, Rav Menachem Mendel Schneerson ztz”l, and his digitally restored voice is the sharpest it’s been since it first echoed across his L-shaped beis medrash known as “770” in 1967, when the recording was originally made. The Rebbe was defending his then-recent decision to ask his chassidim to go around and lay tefillin on Jewish passersby.

While today people around the world acknowledge and appreciate “Operation Tefillin,” at the time it aroused opposition in many circles from other gedolim. But the Rebbe noted that there was a precedent for the campaign: Rav Moshe ben Yaakov of Coucy, a 13th-century Rishon known as the Semag after his Sefer Mitzvos Gadol, would go around the streets of his French city and ask people to put on tefillin.

Ironically, it was the Rebbe’s fervent embrace of technology to spread Torah and Yiddishkeit around the world that is allowing his legacy to remain as fresh as it was when he was alive, frame by frame, one profound farbrengen after the other. The tefillin video, along with thousands of shorter clips divided into two-minute segments, are sent out to tens of thousands of people on a daily basis. It allows Lubavitcher chassidim to stay connected on a personal level with their rebbe so long after his passing — an unmatched accomplishment.

While the tefillin campaign might have been one of the more popular aspects of the Rebbe’s work, it is by no means how his chassidim and admirers defined him. The Rebbe was always looking forward, and as they contemplate 25 years without him — a quarter-century after the tears and the crushing loss — the thousands of hours of video and audio, plus an archive boasting nearly a half million images, continue to point to new vistas for the army he left over, inspiring the Rebbe’s estimated 5,000 shluchim with the tools and fortitude to continue their work in far-off places.

The drab, gray, concrete two-story building at the edge of Crown Heights could be mistaken for just another warehouse dotting the neighborhood. Its storefront-like grates — with both fresh and bleached graffiti attesting to a losing battle with the gritty neighborhood’s street artists — open at regular intervals as trucks draw up, get loaded with merchandise, and then drive off.

The thousands of students pouring out of the huge public school across the street likely have no idea that they are just meters away from the headquarters of one of the largest photo and video archives in the Jewish world. A quarter century after the passing of the revered Lubavitcher Rebbe, Jewish Educational Media’s thousands of square feet are devoted to his memory.

It’s been 25 years since the Jewish world, and Chabad in particular, was shaken by the Rebbe’s passing on 3 Tammuz, 1994. In that span, a generation of devotees has grown up without knowing the Rebbe on a personal level. Many of the shluchim, the couples who journey to the far-flung corners of the world to bring the Torah’s call to humankind, have never seen the Rebbe personally — a generation of soldiers who’ve never even seen the general.

Thanks, however, to a staff of a few dozen young men, the memory of the Rebbe, considered one of the Jewish world’s most influential personalities of the 20th century, is but a click away.