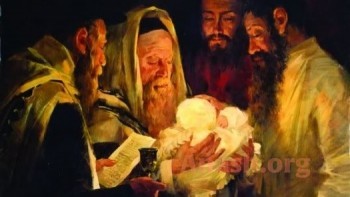 “You have how many siblings and cousins!?”

Great conversation material. It has never let me down.

Growing up in Brooklyn, I never considered large families unusual. Many of my classmates came from big families. Although having four first cousins in my grade was unique even by local standards, I never gave it much thought. Big families were fun, dynamic and normal.

Over the years, as I found myself mixing in different circles, I became aware that large families are really the exception, not the rule. There aren’t many people with more than 10 siblings and hundreds of first cousins. Who knew?

This has led to endless Shabbat-table discussions:

“Must’ve been absolutely berserk growing up in that home!” Actually, my mom ran a tight ship and had everything under control.

“I’m sure you got less love than families with a few kids . . .” Honestly, I never felt unloved. Somehow, there is enough love in the heart and time in the day to bestow to lots of needy little people.

“Do you even know all the names of your first cousins?” Mostly, yes.

“Weddings and simchahs must be HUGE.” Thank G‑d!

People seem to be fascinated by large families in the same way they are fascinated by exotic animals or the possibility of life on other planets. I often feel like an alien trying to share what life in a faraway galaxy is like.

The truth is that large families are not that different from small families. There’s just a lot more of everything. Lots of food. Lots of beds. Lots of bickering. Lots of drama. Lots of love, tears, hugs and people to share your experiences with.

When I was growing up, we’d welcome a new baby into our home every few years. We learned how to share, perform housework, change a diaper and manage conflict. By the time we got married and had children of our own, we didn’t perceive babies as foreign, fragile creatures. We didn’t need to take any parenting courses. It was life as we knew it. It was natural.

My late grandfather, Rabbi Meir Avtzon, used to refer to himself as a billionaire. And believe me, it wasn’t in dollars. He saw children, grandchildren and great-grandchildren as true wealth. He saw me as worth billions. What a perspective on children!

I know that there are many people who do not have the opportunity to have children for a variety of reasons. To me, that drives home the need to take advantage of the gift that some of us do have: the ability to bring more life into the world.

The miracle of large families became even more potent to me when I recently sat shiva for my late father.

It would not be an exaggeration to say that this shiva was huge. Shiva, the traditional seven-day mourning period, is observed by the parents, siblings, spouse and children of the deceased.

Ready for some math?

My father is one of fifteen. His 14 siblings sat shiva.

My parents were blessed with 12 children.

So including my mother, there was a total of 27 immediate family members who sat for a week of mourning and reflection for one individual. The cloud of death had a thick silver lining.

In a world where loneliness has reached epidemic levels,1 having so many immediate relatives (plus hundreds of nephews, nieces, in-laws etc.) who love and miss my father is an incredible legacy and gift. Can anything compare?

My two sets of grandparents were both blessed with very large families, each having more than a dozen kids. And no, they were not well-off financially.

My mother’s parents raised their 13 children in Communist Russia, waiting in bread lines to bring home a few crusty loaves, all while never working on Shabbat, which made earning even a meager living difficult.

Did the children resent it? Actions speak. They went on to collectively have over 100 children.

Here is a story about my paternal grandparents:

Mrs. Cheyena Avtzon had given birth to six children in Europe. When she and her husband, Rabbi Meir Avtzon, came to the U.S., she expected to receive a more advanced and patient-oriented approach to medical treatment.

How surprised was she that upon a visit to a gynecologist, he adamantly told her she should never consider having another child!

Mrs. Avtzon tenaciously told the doctor that his job was to help women have children, not to count them or try to prevent them from having more. When she told the Rebbe, of righteous memory, about the doctor’s prognosis of the dangers that might arise in future pregnancies, the Rebbe answered with a vigorous blessing, promising her that she would have many more children.

Which she did. Nine more children subsequently joined the Avtzon family.

My father was the eighth in the family.

But it is so expensive! It is so challenging!

During one meeting with the Rebbe, Rabbi Avtzon told the Rebbe that his children were reaching marriageable age. He and his wife had never worried about their own finances, but he wanted to be able to provide the children with at least a modest wedding and dowry.

The Rebbe replied, “Material nadden (dowry) comes and goes; spiritual nadden stays forever. G‑d gave you the unique gift to offer your children spiritual nadden. This is genuine nadden. You can tell this to your prospective in-laws in my name when you sit down to discuss the wedding details.”

With G‑d’s blessings, it worked. Over 120 grandchildren and hundreds of great-grandchildren later, the wealth continues through the generations.

The Rebbe writes, “Jewish wealth is not houses and money. Jewish wealth, which is eternal, is the observance of Torah and mitzvahs, and bringing children and grandchildren into the world who will observe the Torah and its mitzvahs.”3

For those of us4 who have the opportunity to have large families but are plagued with doubts—Will they get enough love? What about tuition costs? How will I handle it?—I say: You will never regret the children you do have. A large family is such an incredible gift to yourself, your kids, your community and the world. Go for it! G‑d will help—really! He’s the third partner in your marriage and He will do His part.

When my wife and I got married, we knew that children were a blessing. It was only after we began having them that we truly appreciated the message the Rebbe would often share, that each child comes with a bundle of blessings from G‑d. We have merited to see it tangibly. Each child came with incredible gifts for the family, including financial blessings.

On a very personal note, I must add that each child has opened my heart wider, not only to that child but to the others as well. Each child makes me a better parent to all of our children.

And an extra bonus: According to tradition, each child we bring into this world brings the era of Moshiach even closer. It really is a win-win.

What do you think?