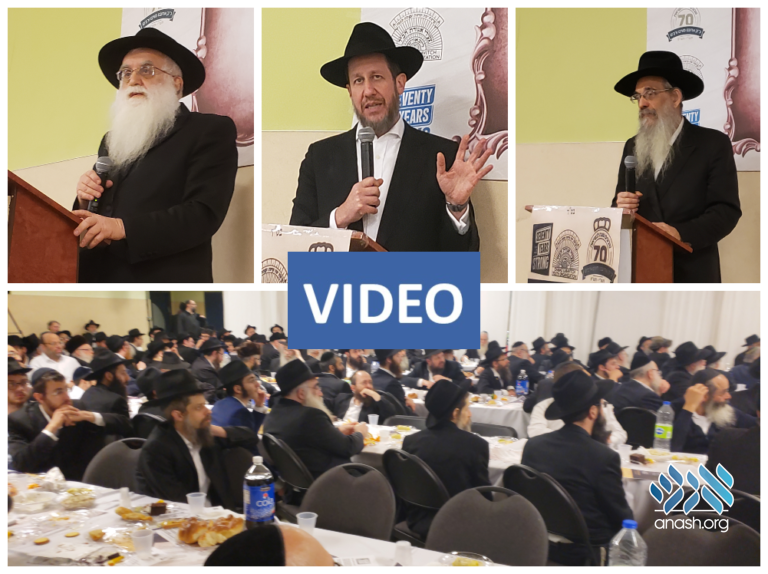 What happened when a shliach decided to cash out his disability insurance policy and step down, due to a debilitating stomach ailment?

The Montreal community hosted their annual Yud Shevat farbrengen this past Motzei Shabbos with the attendance of Rabbonim and Mashpiim.

At the farbrengen, the guest speaker Rabbi Yitzchak Schochet of London shared this powerful story with the Anash community:

18 years ago, a particular shliach was suffering from a debilitating stomach condition. He was hospitalized repeatedly and underwent many treatments, but his situation was only just manageable or worse.

Two months prior to his diagnosis, the shliach had taken out a life insurance policy that happened to include permanent disability insurance. This clause would allow him to cash in, as his condition affected his ability to carry on his daily work. Needless to say, to receive the payout, the shliach would have to step down from his job.

Reluctant to pay out, the insurance company began to investigate the case very thoroughly. After going through various channels , it ended up on the desk of the company’s regulator who would make the ultimate decision, which would be given on a late Tuesday morning.

The day arrived. The shliach went to the mikvah in the early morning and wrote a Pa’n to the Rebbe, requesting that everything go smoothly, which he then sent to the Ohel.

Opening up the Igros to read and learn until the phone call would come, the shliach was surprised to see that in the first letter he had turned to, the Rebbe was addressing a son who had written concerning his parents – shluchim – who weren’t in the best of health. The son had suggested that perhaps they should slow down a little and lessen the stresses of their shlichus. Perhaps this would make them stronger.

To which the Rebbe responded: everything in gashmius is rooted in its source in ruchnius. It makes no sense to diminish spiritual matters to enhance the physical. On the contrary – only by increasing in their ruchnius, would his parents experience better health. The more they would add in ruchnius – in a way of lechatchila ariber – the more Hashem would add b’gashmius.

The shliach read the letter again. And again. Then he picked up the phone to call his insurance broker and let him know he was calling it off.

Rabbi Schochet concluded the story by identifying the shliach as none other than himself.

“Last year,” he said. “I went back to my specialist for a mandatory checkup who had these precise words to say: ‘Yitzchak, if I didn’t know you had what you had, I would never assume today that you have it. In other words – it’s supposedly still there because science says it doesn’t go away but I don’t see any evidence of it whatsoever.’

“The Rebbe remains eminently with us every step of the way,” Rabbi Schochet declared. “Each of us is a shliach and shares in the mutual responsibility not to weaken or slacken. We [must] only increase and enhance and ker a velt to bring about the geula!”