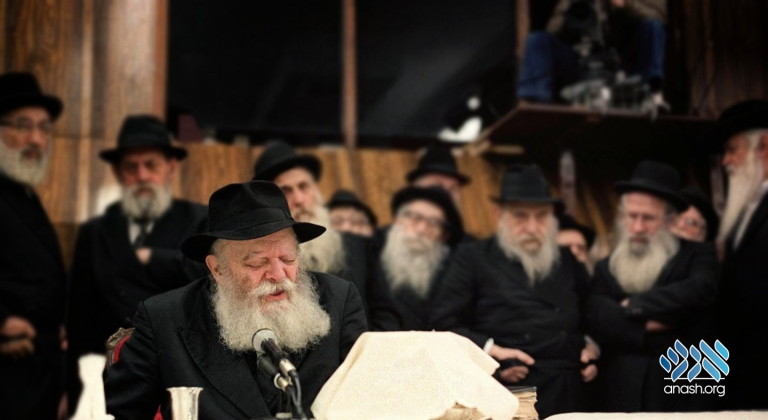 Rabbi Michoel Seligson recounts the awe-inspiring atmosphere during the Rebbe’s delivery of the “Matan Torah maamar” at 3:00 am on the first night of Shavuos.

At the conclusion of the meal, the Rebbe would return to his room, and all of the chassidim would recite Tikun in the shul. A short time before 3:00, Chassidim would gather closer to the Rebbe’s farbrengen table and prepare to greet the Rebbe and hear the maamar.

The scene in shul at that time was unique. At 3:00, it would become quiet. The Rebbe would go to the bima, sit down and wrap a handkerchief around his hand, as was customary by the Rebbeim before reciting a maamar. The Rebbe would then close his eyes and begin the maamar, his voice heard in the whole shul. Chassidim referred to this as the Matan Torah maamar.

At the farbrengen, the Rebbe did not request the singing of the niggun which is traditionally sung before a maamar is said.

I personally have memories of the last three years of the Shavuos maamarim. One who was present at this event will never forget the indescribable excitement and spiritually uplifting experience of hearing the opening words, “When Moshe went up to heaven” or, “It was on the third day in the morning.”  The concentration of the assembled listening intently, exerting themselves not to miss a word and trying to absorb as much as possible, each according to his potential– the atmosphere of this holy event was unparalleled.

The maamar would last approximately forty minutes. Upon concluding, the Rebbe, his face still as solemn as it had been during the maamar, would leave the shul while removing the handkerchief from his hand.

Chassidim would then gather, and the Rebbe’s chief chozer, Reb Yoel Kahn, would begin to chazer the new maamar.

On one occasion, someone attending the Rebbe’s Yom Tov meal asked what the source is for saying a maamar at this hour. The Rebbe answered that he saw this was done by the Tzemach Tzedek. When one of the other chassidim mentioned that they were familiar with the source, the Rebbe concluded, “If I would have a doubt about scheduling the time for the maamar, I would not exhaust the olam with a maamar before dawn.”

I once heard from Reb Moshe Groner, who was present at the time, that the Rebbe took off his coat and handed it to him, and that he held it until after the conclusion of the maamar. In order to give Chassidim a chance to return in time for the maamar, they chose a long nigun, and by the end of the nigun, many Chassidim had already returned to 770.

After the conclusion of the maamar, the Rebbe looked to Reb Moshe for his coat. When Reb Moshe offered to assist the Rebbe put it on, the Rebbe smiled, hinting that it was not necessary, and went home.

In 5731/1971, when the Rebbe was no longer eating the Yom Tov meals in the Frierdiker Rebbe’s apartment, the Rebbe informed the Chassidim that the Shavuos maamor would be included in the Shabbos farbrengen, which took place on Erev Shavuos.

In 5732/1972, the Rebbe initiated this custom of farbrenging on the evening prior to Erev Yom Tov of Shavuos and Sukkos. During this farbrengen, the Rebbe would deliver a maamar on the upcoming Yom Tov. The Rebbe farbrenged every year on the evening of the 4th of Sivan through 5747/1987.