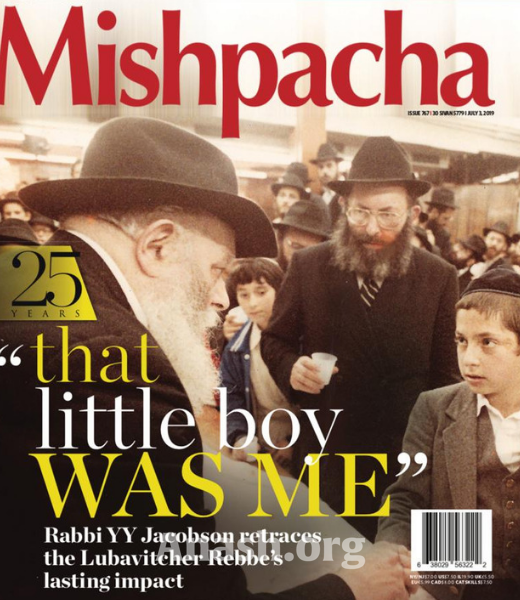 In this week’s Mishpacha Magazine, Rabbi Yossi Jacobson describes the Rebbe’s impact on the world.

(Excerpts from the article)

Twenty-five years after the Lubavitcher Rebbe’s passing on 3 Tammuz, 1994, I can still hear his wise, holy words — how he ignited the Divine spark in every Jew, viewing each of us as an ambassador of infinite love, light, hope, and truth. When you walked away from an encounter with the Rebbe, you forever cast your sense of inner mediocrity

I miss davening a Minchah with the Rebbe. To see his ernstkeit —the sincerity and yiras Shamayim when he davened — was enough to know forever that G-d is real. He barely swayed, nor did he maneuver his hands. He stood in one place, almost not moving a limb. But he was all deveikus. There was something about his face that still makes me cry: You can see in it all the pain and all the joy of the Jewish People. The Rebbe would sit by chazaras hashatz on a bench (used moments earlier by the yeshivah boys learning), facing the crowd, with his hand on his forehead, pointing in the siddur, following the chazzan word by word. And then for a few days, the Rebbe did not place his hand on his forehead. It was strange. Why would he change his custom of 40 years? A sensitive eye in the shul noticed that during the Minchah services of those days, there was a guest from Eretz Yisrael, someone whose body and face were badly deformed. He was also blind. It was hard to look at the person. It became clear that the Rebbe didn’t want anyone to think he was trying to avoid gazing at the disfigured individual.

I miss the Rebbe’s Shabbos and Yom Tov farbrengens. How to describe a five-hour farbrengen with the Lubavitcher Rebbe? For some moments, you felt you were in the company of the Baal Shem Tov — as the Rebbe sang, danced, and spoke of the purity of every Jewish soul. But then, as he dedicated an hour to delve into a “chatzi shiur” or a Rambam in Pesulei Hamukdashin, you felt you were in the chamber of a world-class rosh yeshivah. And hen he became the classic Chabad Rebbe, as he closed his eyes and presented a ma’amar of the Baal HaTanya on the secrets of Atzilus and the Sefiros. You thought you were done, when he would begin a siyum on Horayos, Bechoros, or Eiruvin, and you felt you were in the mechitzah of one of the great minds of the generation. As you could barely hold your breath, he shifted to his brilliant derech in analyzing a Rashi on the parshah. In between the talks, the singing was electrifying. He made sure to greet every one of the thousand people present with a personal l’chayim, often signaling a special gesture toward an individual sitting in the audience, and you knew that this Jew needed some chizuk. The song finished, and the Rebbe would present a deep explanation on a particular concept in hashkafah, halachah, or aggadah, and you observed the Rebbe’s unique approach to synthesize all streams of Torah into an integrated whole, where halachah, lomdus, machshavah, chassidus, all meshed into one whole.

Then he would begin to discuss the contemporary situation of the Jewish world, and I knew he had his finger on the pulse of G-d’s People. Then, as the crown began to sing the Alter Rebbe’s niggun, his face changed. Suddenly I felt I was in the presence of a tzaddik, one of those rare souls planted from another world into ours, to remind us that heaven and earth are really one. He finished the fabrengen, the clock showed two a.m., and I stood there, silently, numb from ecstasy. My heartstrings were on fire, as I thanked Hashem for sending such a soul into the world.

New Haven’s Rabbi Moshe Hecht, who had a gift of gab, was planning to travel on vacation to Israel. When he asked the Rebbe for a brachah before his trip, the Rebbe said to him: “I understand that there is an old age home in Hungary with some elderly Jews, and kosher meals there are not an option. Can you travel to Israel via Hungary and use your oratory skills to persuade the boss to give the Jewish residents an option for kosher?” Reb Moshe would quip, “It’s a bad idea to tell the Lubavitcher Rebbe you’re going on vacation…”

I still recall the Shabbos in the 1980s when Bob Dylan, one of the greatest icons of the hippie movement, attended a farbrengen. The Rebbe was notified earlier that he would be there, yet surprisingly, each time the Rebbe lifted his cup of wine to say l’chayim, he passed over him, as though Dylan wasn’t present. After Shabbos, the Rebbe was surprised to learn from one secretary that Dylan was present, as the Rebbe maintained that he didn’t notice him. One chassid picked up on the secret: Bob Dylan, whose original name is Shabsi Zisel Zimmerman, had at one point converted to Christianity, and never went to the mikveh after his returnto his People. Could it be the Rebbe simply did not “see” him? That living in a halo of kedushah, the Rebbe’s eyes didn’t observe this person who willingly left the faith?And so they sent Dylan to the mikveh, and next Shabbos as Bob Dylan lifted his cup, the Rebbe immediately greeted him warmly.

I still recall that moment on Simchas Torah, when East Flatbush’s renowned Rabbi J.J. Hecht arrived at “770” in middle of the hakafos, after he finished dancing in his own shul. As the Rebbe saw him, the Rebbe threw him a kiss coupled with a colossal smile. I never saw the Rebbe perform such a gesture, certainly not in the presence of nine thousand people on Simchas Torah. I knew there was more to the story. That year, Rabbi Hecht passed away. I thought that perhaps the Rebbe felt this was their last Simchas Torah together and he was bidding him farewell. But then Rabbi Hecht’s daughter told me that her father, while walking from East Flatbush to the hakafos, shared with her a dream he had hours earlier during his Yom Tov nap that very afternoon. In his dream he asked the Rebbe for permission to give him a kiss (something chassidim usually do not do), and indeed he went over to the Rebbe and gave him a gigantic kiss. Rabbi Hecht awoke from his dream and then went to shul for Minchah-Maariv. But that very night, as he entered “770” for hakafos, the Rebbe returned the kiss…

Once, on the afternoon of Hoshana Rabbah, the Rebbe was handing out the traditional “lekach,” honey cake, in his succah, and people were lined up to receive a piece of cake and a blessing. Standing in line was a young fellow, dressed hippie-style, in sloppy jeans and sporting an unkempt bush of hair. Standing behind him was a distinguished rosh yeshivah, a sincere Satmar chassid. As the unkempt fellow approached, the Rebbe asked where will you be for the Simchas Torah hakafos?” The man answered, “I have no plans to be anywhere for hakafos.” “It would be my great honor and privilege,” the Rebbe replied to this secular Jew, “if you would attend hakafos with me in the synagogue and we can dance together with so many other Jews.” The fellow thanked the Rebbe for his invitation but remained noncommittal. “I’ll think about it,” he said, and walked away.

So the Rebbe shared with him the story, which the Yismach Moshe heard from his teacher, the holy Seer of Lublin. Reb Itzikel of Drobitch, the father of Reb Yechiel Michel of Zlotchov, the renowned disciple of the Baal Shem Tov, was asked by Rashi: Why is there such a commotion On High about the greatness of your son? How did Reb Michel merit such praise? Reb Itzikel replied that his son studies Torah day and night for the sake of Heaven. “But aren’t there others who do the same?” Rashi questioned. “There is something singular about the pleasure your son gives to Hashem. What is it?” “My son fasts and deprives his body of worldly pleasures,” replied Reb Itzikel. But again, Rashi maintained there were others who did the same. “My son gives away huge sums of money to the poor.” Rashi was still unsatisfied. There are others who also distribute excessive tzedakah. Finally, Reb Itzikel replied with three words from the prophet Malachi: “V’rabim heishiv mi’avon — My son, Reb Michel Zlotchover, has returned many from the path of sin to their Father in Heaven.” When Rashi heard this response, he was finally satisfied.

The Satmar chassid was flabbergasted.The Rebbe understood that, coming from his insulated background, it was difficult for this chassid to appreciate why the Rebbe would display such closeness to a secular hippie. So the Rebbe shared with him this story from the founder of Satmar.The rosh yeshivah responded to the Rebbe: “Ich hob git farshtanen.” (In other words, “I got it.”)

A postscript to the story. A friendshared with me that during the Rebbe’s electrifying hakafos, he encountered the young hippie dancing away with an old chassid. Apparently, he couldn’t resist the Rebbe’s invitation after all…