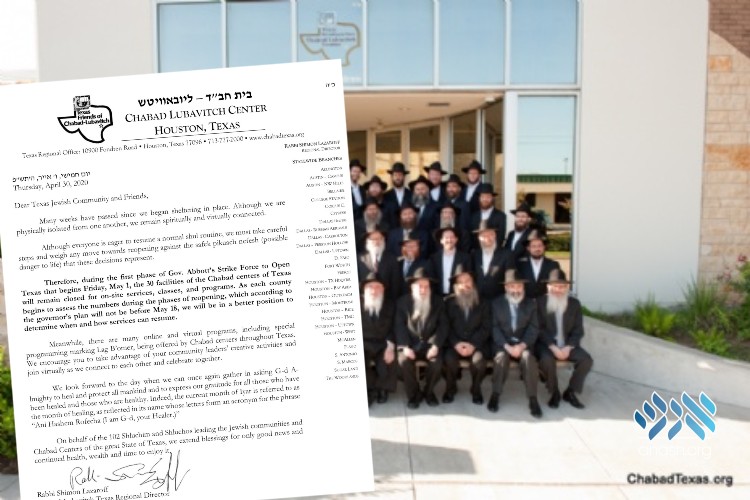 Texas Governor Greg Abbot announced the beginning of a multi-phase plan to reopen his state’s economy earlier this week, declaring that the stay-at-home orders have worked in tamping down the spread of coronavirus.

He said the first phase of the state’s slow reopening began Friday, May 1. Phase two, which will happen around May 18, will open more businesses and allow those businesses who opened in phase one to expand its operations. It will also allow the capacity limit to expand to 50 percent.

When it comes to places of worship, Abbott said they can hold expanded services as well. “This is permission to open, not a requirement,” he said.

Despite the official permission, Chabad of Texas regional headquarters sent out a letter saying that Chabad Houses across the state would remain closed.

“Although everyone is eager to resume a normal shul routine, we must take careful steps and weigh any move towards reopening against the safek pikuach nefesh these decisions represent,” says the letter, signed by Head Shliach Rabbi Shimon Lazaroff.

“Therefore, during the first phase of Gov. Abbott’s Strike Force to Open Texas, the 30 facilities of the Chabad centers of Texas will remain closed for on-site services, classes, and programs. As each county begins to assess the numbers during the phases of reopening, we will be in a better position to determine when and how services can resume,” the letter said.

“A statement went out from the Chabad Lubavich Center’s Texas Regional Headquarters… that informed us that all synagogues will remain closed until Phase 2, which would be sometime around mid-May, and we’ll reassess where things are at that time,” Greenberg said.

“What we have been doing here is for what usually are in-person services during the week, we’ve been having Zoom meetings,” he said. “We cannot use this technology during the Sabbath but after Sabbath, we usually do.

“During this time, we were able to make sure people could celebrate Passover and partnered with the Jewish Federation to provide items for elderly members. We have been doing our best to stay connected with people during these times,” he explained.

“These are definitely challenging times,” Greenberg added, “but thank God, everyone is healthy” as no one associated with Chabad Lubovitch has tested positive for Covid-19.