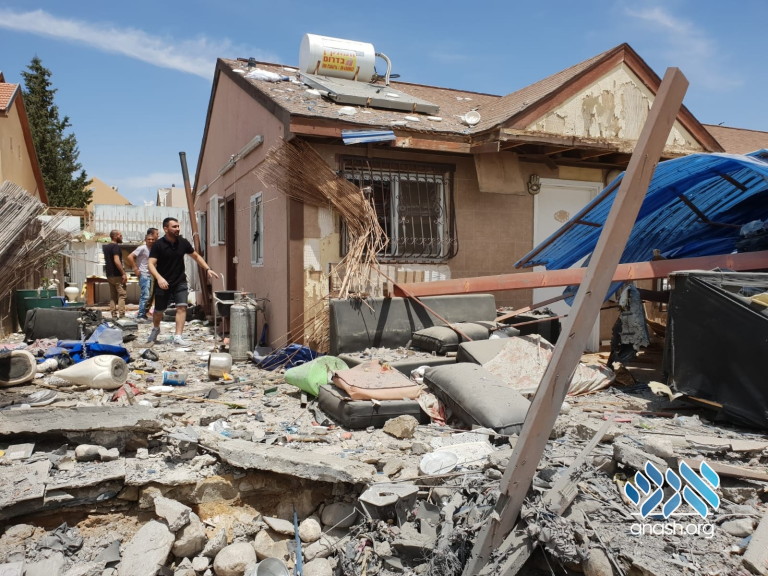 The death toll since the rocket fire from Gaza began on Erev Shabbos has R”L climbed to three, as an additional two Israelis were R”L killed from Gaza rockets on Sunday. Over 100 rockets have been fired since noon Sunday, and sirens continue to sound at this time along the Gaza border, Tifrach and in Ofakim.

In one incident, two Israelis were R”L killed when there was a direct hit to an Ashkelon factory. MDA reports those victims being men, 22 and 40-years-old. There was also a direct strike to a vehicle near Yad Mordechai, in which the driver was critically wounded. All three of these victims were treated dead at Barzilai Hospital. There are others wounded from rocket fire, apparently one in now listed in moderate-to-serious condition and others with less serious injuries.

The IDF is checking to determine if a Coronet anti-tank missile struck the vehicle and is likely to take additional action as a result. The area of that attack has been declared a closed military zone at this time.

Since the renewed rocket fire earlier Sunday, over 70 rockets have been fired into southern Israel, with the total well past 500 since Erev Shabbos. The communities along the Gaza border, especially the Eshkol Regional Council, are literally being pounded by rocket fire. B’chasdei Hashem, most of the rockets landed in open areas, others were intercepted by the Iron Dome, and others unfortunately resulted in death, injuries and property damage.

Over 110 persons have been treated since erev Shabbos in Barzilai Hospital, including an 80-year-old woman who remains in serious condition following emergency life-saving surgery. 2 others remain in serious condition, 1 moderate, 53 light and 55 victims of hysteria. 28 victims are currently being treated and 9 have been admitted.

Israel reports that despite reports to the contrary, no negotiations towards a ceasefire are underway. Israel reports it continues to target terrorist objectives in Gaza.

• News13 reports a Shul was hit by a rocket in the IDF’s Kissufim Outpost. Two soldiers sustained light injury.

• Fires reported in Kibbutz Eshkol as a result of rockets landing in open areas.

• Additional IDF ground forces and tanks are moving towards the Gaza border as the Security Cabinet continues meeting in Jerusalem.

Soroka Medical Center in Be’er Sheva reports receiving 11 victims in the past hour, including 10 being treated for hysteria. MDA reports treating a total of 66 hysteria victims.