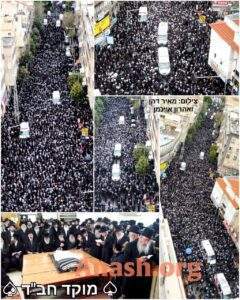 Levaya left his shul in Bnei Brak and then the Yeshiva Tomchei Tmimim in Kfar Chabad. Kevurah was in Chelkas Chabad on Har HaZeisim near his late father Rav Yakov Landa.

Tens of thousands, lead by leading rabbonim and , accompanied Harav Moshe Landa to his final rest today. The main streets of Bnei Brak were closed to all traffic, and the entire city came to a standstill. A was ordered for the duration of the , and stores were closed during that time. The Rov had asked, that in accordance with Chabad, that no be delivered. Instead, words of inspiration were offered by his brother Rav Eli Landa, the magid Reb Meilech Biderman, and others.