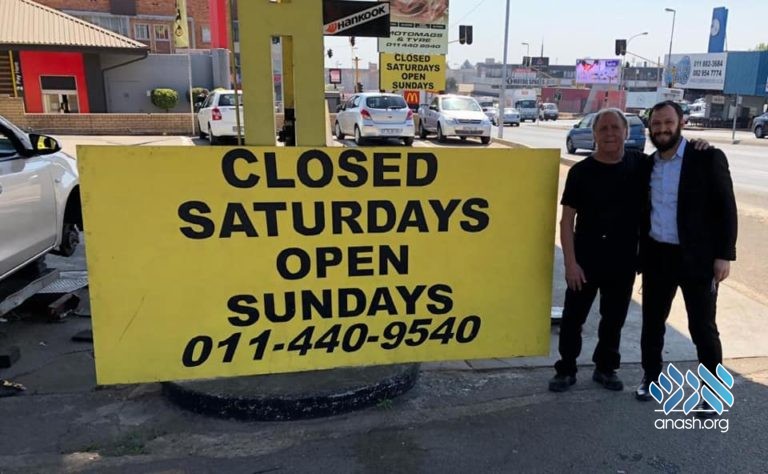 We are rarely privy to the effects of our outreach efforts, but Massachusetts shliach Rabbi Nechemia Schusterman recently discovered the effect of a decades-old Mivtzoyim interaction.

As a Chabad yeshivah student, my Friday “job” was to go out there, put on tefillin with people, distribute Shabbat candles, and fan the flames of Judaism. My buddies and I were rarely privy to the effects of our outreach efforts, but that’s OK, because we know that every mitzvah, every positive interaction, contains infinite value, regardless of where it did or did not lead.

Yet, we couldn’t help but wonder: Did they like putting on tefillin? Did it have meaning for them? Did they forget about our interaction the moment they walked away? Did they think about it further? Were they moved? Moved enough to do anything?

I recently received an answer to this perennial question.

Some 23 years ago I did a two-year stint at the Chabad yeshivah in South Africa. On Fridays, I partnered up with a native, Yossi Pels, to share Jewish observance in downtown Johannesburg.

It was not the safest neighborhood at the time, but the work had to be done. There, we met a sweet fellow named Mike, who ran a tire and mag wheel store together with his wife.

We visited Mike weekly, and soon began putting on tefillin with him each time. We grew fond of one another and even purchased a Siddur for him as a gift, but alas, my time in the country came to an end, and in a world before Facebook, our relationship petered out. (Yossi stayed in touch with Mike a while longer, but when he married and moved to the United States, his visits became less frequent.) To be totally candid, I basically forgot about Mike, that is, until very recently.

Now, in South Africa, it is not uncommon for a self-described “very secular” Jew to attend shul regularly. Regardless of their level of observance, they are very traditional. Our friend Mike, attended (and still does) the Sydenham Highlands North Shul, where Rabbi Yossi Goldman serves as senior minister.

I recently reconnected with Rabbi Goldman when we both attended the same wedding. Though he is several decades my senior, we schmoozed about the good old days in South Africa. He then mentioned Mike and a special letter he received from him. (This letter, while nearly 23 years old, only came to my attention now.)

I was brought up in a less observant branch of Judaism, and I later tried another temple which felt closer to that of the Orthodox service, but found I didn’t care much for that shul either. So I eventually took the step of attending your synagogue—Sydenham Highlands North. It took some time, but I managed to get the hang of it and even enjoy it.

About two years ago [now 22 years ago, circa 1998 –ed], some “strange fellows” walked into my Johannesburg business on a Friday afternoon and asked if anyone was Jewish. I answered in the affirmative. They asked me if I had put on tefillin that day and I confirmed that I had not.

I was embarrassed, not because of the question itself, but because I had never put on tefillin before and felt I would make a fool of myself by asking any further questions.

The gentlemen asked if I would like to put on tefillin there and for fear of embarrassment, I refused and they left.

But they persisted, visiting again the next Friday, and asking the same question, whereupon I confided my hesitation and lack of experience. I led them upstairs where they positioned and wrapped the tefillin around my arm and head and asked me to read the relevant portion (which I was surprised to find I already knew).

I will never forget the feeling I experienced at that moment. It was almost as if I was suddenly wrapped up in a warm cocoon. It was a feeling I had never experienced before.

During this period, my business was going through a rather bad patch. The bank had pulled the rug out and I was in deep trouble, not knowing which way to turn or where to get help.

I never told the yeshivah boys how bad things were; I simply mentioned “business was not so good.”

After a few more Friday visits, I decided to order my very own set of tefillin and I have been putting them on ever since.

I truly believe it has changed my life.

I became calm and seemed to have a clearer head. Although my business was running very heavily on overdraft, I felt sure of myself and even managed to scrape together a few Rand to invest in the stock market.

Several weeks ago, everything came to fruition! I woke up one morning, and after opening my business for the day, I suddenly called my stockbroker and instructed him to sell the complete portfolio that I had built up. The broker thought I was crazy and tried to convince me not to sell.

But I had other ideas and told him, much to his dismay, to sell out. Shortly thereafter, the markets took a dip, but I had my cash. I phoned my bank manager, made an appointment to see him, and took my business out of an overdraft that exceeded R$500,000!

Rabbi, it is not my intention to boast that I did so well and managed to sell at exactly the right time on the stock market. My wish is to inform everyone who wishes to listen that I firmly believe it was the yeshivah boys’ Friday visits, which introduced me to tefillin, that helped me get out of debt. (In fact, my bank manager thinks I am a genius and cites me as an example to other clients!)

Oh, and business is still a little shaky, but I know that I, together with my tefillin, will work my way to better turnover which, believe it or not, is already starting to happen.

I’ve since reconnected with Mike via WhatsApp and Yossi Pels still visits whenever he goes back to South Africa.

I have further found out that Mike still puts on tefillin daily, 20 plus years later. Moreover, Mike has become a lamplighter himself. As Jewish folks pull into his shop to get the new tires, or an alignment, he reminds them that they need a “spiritual alignment” as well and offers them the opportunity to put on tefillin.

About six months ago Mike started closing his store for Shabbat, even though that is the busiest day of his workweek. His faith is so staunch that he feels confident G‑d will provide for him in other ways or on other days.

This story is still unfolding, but it is certainly the fulfillment of a vision that the Rebbe had when he launched the tefillin campaign in 1967.

Wherever you are on the planet, there is a Chabadnik waiting to wrap tefillin on you. Give it a try; what do you have to lose?