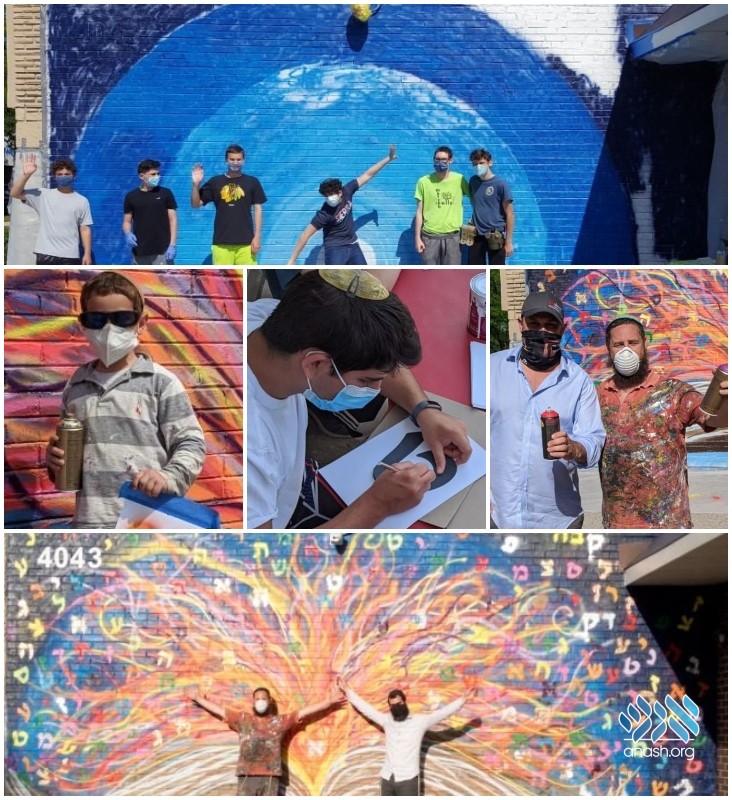 The CTeens of Skokie, IL, found a bright spot in a corona-dreary summer: together with Pop-Art Rabbi Yitzchok Moully, they created an art display that’s turning heads in their city.

Shluchim Rabbi Yochanan and Yona Posner of Skokie, Illinois have been working with teens for a long time. As they watched the pandemic and the ensuing shutdowns play out, they understood the adverse effects that the situation could have on local youth.

“Kids can’t go to camp, they can’t go anywhere – all they can do is sit in their house, bored, and watch TV,” Rabbi Posner told Anash.org. “There is a need for wholesome, exciting and memorable activities that are somewhat social and can be done outdoors.”

The Posners asked Pop-art Rabbi Yitzchok Moully to come to Skokie and lead the teens in creating a giant mural on a wall of the Chabad House facing Dempster Street. They discussed the idea of depicting the Rebbe’s mivtzoim, and settled on the ones most relevant to their shlichus: limud hatorah and chinuch.

On Monday July 13, work on the wall began. The teens organized themselves into groups and took shifts scraping off old paint, priming the wall, and creating the artwork under Moully’s skilled instruction. It took them two days to complete it.

“The kids really did the work on this project,” Rabbi Moully told Anash.org. “I provided them with a concept and assisted them in the cleaning, priming and painting, but they made it their own. They cut the stencils of the alef beis, each one choosing letters that reflect them.”

The 25 foot long mural stands facing a street that sees a heavy flow of daily traffic, including people with a long commute to work.

“The response has been great,” said Rabbi Posner. “People we haven’t heard from in a while are reaching out to tell us they drove by the wall and loved it. I’ve also seen people walk up to take pictures of it.”

As for Moully, he’d like to see this trend continue with ‘mivtzoim walls’ reaching every city.

“I’d love to do this in every cheder, every Jewish day school,” Moully said. “It’s a powerful combination of art and chassidus, and the kids feel empowered and excited by their ability to create something of their own.”