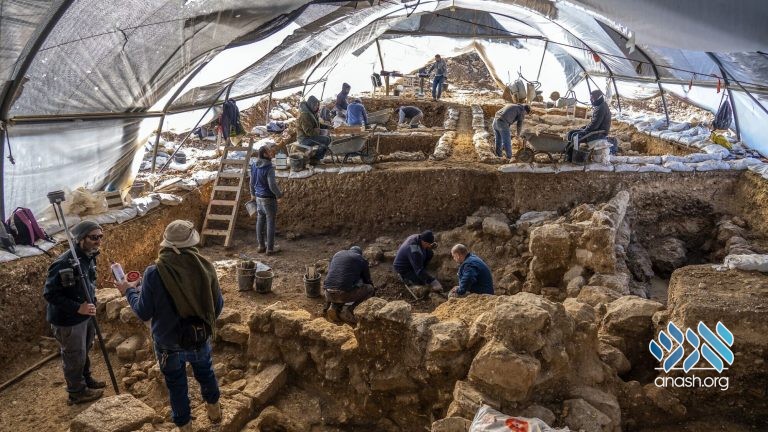 Over 120 seal impressions stamped on jars were discovered in a recent archaeological dig in Yerushalayim, revealing information into tax collection in the period of the Judean kings some 2,700 years ago.

In excavations in Yerushalayim near the U.S. embassy conducted by the Israel Antiquities Authority, JNS.org reported, more than 120 of some of the largest and most important collections of seal impressions stamped on jars were discovered, revealing information into tax collection in the period of the Judean monarchs some 2,700 years ago.

The impressions were stamped with the letters “LMLK”—meaning “to the King”—and were written in ancient Hebrew script, along with the name of the ancient city in the Kingdom of Judah.

The excavations are funded by the Israel Land Authority and administrated by the Moriah Jerusalem Development Corporation.

Other seals are associated with private individuals and bear the name of senior officials of the Kingdom of Judah or wealthy individuals from the First Temple period.

The administrative storage center dates back to the days of Kings Chizkiyahu and Menashe in the eighth century to the middle of the seventh century BCE. The excavations revealed an unusually large structure with 120 jar handles bearing seal impressions, in one of the most important archaeological collections ever uncovered as part of archaeological work in Israel.

Naria Sapir and Nathan Ben-Ari, directors of the excavations on behalf of the Israel Antiquities Authority, said: “This is one of the most significant discoveries from the period of the Kings in Jerusalem made in recent years. At the site we excavated, there are signs that governmental activity managed and distributed food supplies not only for a shortage, but administered agricultural surplus amassing commodities and wealth.”

“Evidence shows that at this site,” they continued, “taxes were collected in an orderly manner for agricultural produce, such as wine and olive oil.”