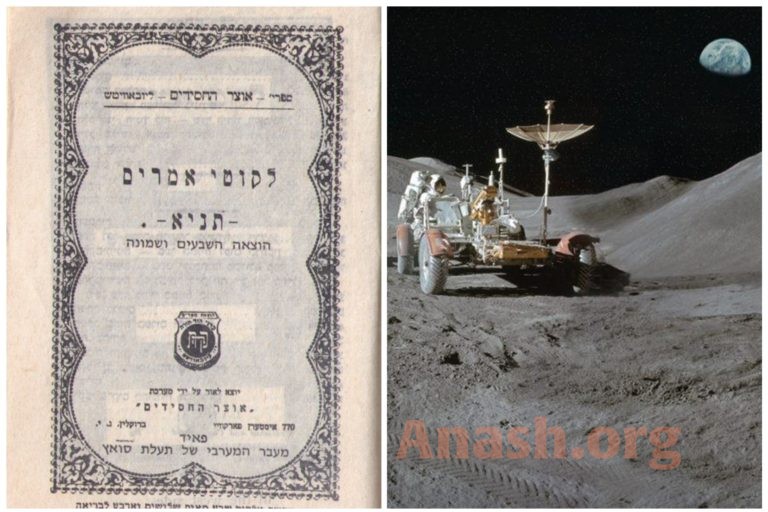 The Tanya has been printed and distributed to nearly every location in the world, bringing about the ultimate spreading of wellsprings of Chassidus. Now it is about to make an arrival on the moon.

By: Yehuda Sugar for Chabad.org﻿

The world, particularly Yidden who follow a lunar-based calendar and recite Kiddush Levana each month, has always been fascinated by the moon. For the last half-century, this included moon landings and men walking on the moon.

Nearly 50 years after man first set foot on the moon during the U.S. Apollo 11 mission—perhaps with a little less fanfare—Israel and its supporters the world over are looking to celebrate another moon landing. This time it is an unmanned Israeli spacecraft, the first-ever launched by Israel, complete with members of a ground-control team who wear yarmulkes.

The much-vaunted “Beresheet” is scheduled to maneuver its way onto the moon’s surface at 10:25 p.m. Israel time on Thursday. Among the Jewish symbols and treasures packed onto the craft and landing with it is a “Chitas,” an acronym that stands for the Chumash, Tehillim and the Tanya. The trilogy that includes the Tanya is held close to the hearts of many, especially followers of Judaism’s esoteric teachings

practice of distributing Tanyas far and wide follows a long-held tradition based on a 1978 directive of the Rebbe—to print the Tanya in as many places as possible where Jews reside, even if just one.

The Rebbe said that every place the Tanya was printed would become a source of Chassidic teachings, and thereby follow the lesson of the Baal Shem Tov, founder of the Chassidic movement, that spreading those teachings would hasten the arrival of the final redemption. The Rebbe added that when Jews learn that a Tanya was printed in their city, they will be compelled to study it.

Rabbi Mordechai Siev, who heads the outreach program at Ascent in Safed, Israel, was involved in the effort to print the first Hebrew-English Tanya in Israel in 2000, and has been following the spacecraft with its holy payload with great interest.

“I believe that the Rebbe’s vision and directives and focus on improving the world wasn’t just limited to what we know and what we see in front of us,” Siev told Chabad.org. “Having this special book on the moon would definitely be a step in the direction of all the world knowing there’s a G‑d, as Maimonides talks about in his great work the ‘Mishneh Torah.’ ”