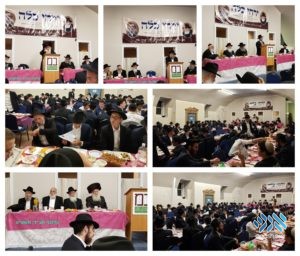 Marking the seventy-fifth yahrzeit of the Rebbe’s father, hundreds of Rabbonim, Chassidim, Anash and Jews from all communities joined 9th annual Yarchei Kallah in the Chabad Beis Menachem Shul of Tannersville, New York. A seudas mitzvah was served, and participants listened to the Divrei Torah of the Rabbonim, as well as a powerful message from the Bostoner Rebbe.

As Shabbos Nachamu ended in Beis Menachem of Tannersville, NY, the shul began to be transformed. Long tables were set up, bedecked with fine tablecloths and covered with delicacies. A Teshurah printed especially in honor of the occasion was placed on each seat; containing one hundred pages of Horav Levi Yitzchak’s famous Reshimas Hamaasar with explanations based on the Rebbe’s Torah, skillfully compiled by Rabbi Dovid Dubov of Princeton, NJ.

The Torah-filled event was held in honor of the Baal Hahilula, with speeches delving into the profound Torah of Horav Levi Yitzchak. A wide range of participants, Rabbis, community leaders and regular folk from many varying Jewish communities were drawn to Beis Menachem, which has become famous for its thriving life in the summertime, with minyanim, shiurim and chassidisher farbrengens galore. All the attendees were also provided with coins for Tzedaka, so that each individual would be able to partake in the Torah, Tefillah and Tedakah of the evening.

The event was also attended by the bochurim of Yeshivas Kayitz Kingston. Some of those bochurim were among the outstanding participants of the mivtzah to learn Reb Levik’s Torah, and planned to travel several hours later to Alma-Ata together with the other finalists.

The evening opened with a video of the Rebbe courtesy of JEM, with a Sicha about Chof Av, and the Hakafos Niggun of Horav Levi Yitzchok. The speakers then dwelled on the heroic character of the Baal Hahilulah, and gave insights into his unique Kabbalistic Torah teachings. The Bostoner Rebbe spoke about the impact of the Rebbe’s Shluchim, and shared stories about Gedolei Yisroel of previous generations who likewise sought to reach out to their fellow Jews.

A special brochure was passed around among the participants, with an image of Horav Levi Yitzchok’s handwriting on his Zohar, where he explains the Mishna (Keilim 17:14) “Vichol Shenivra B’yom Hashishi.” Rabbi Yisroel Rubin presented the background of the Sugya, explaining how the Rebbe’s father provides a brilliant explanation to the question that bothered generations of commentators.