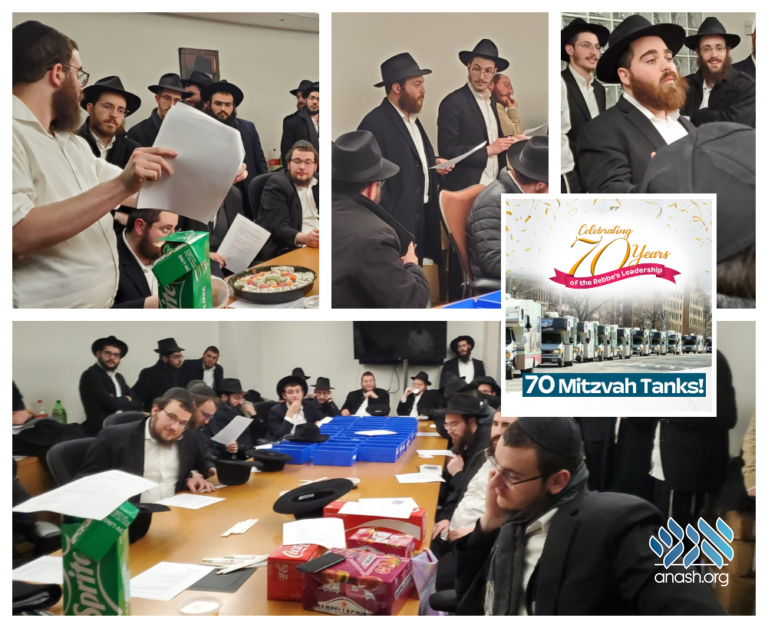 Organizers of the parade of 70 Mitzvah tanks to mark Yud Shvat gathered Sunday night to put the finishing touches on the plans for the historic event.

As Chassidim and world Jewry prepare to mark the 70th anniversary of the rebbe’s leadership, bochurim gathered to put the final touches on the plans for the historic parade of 70 tanks.

The ‘tankistim’, many of whom flew in from around the world to mark Yud Shvat in New York, gathered for a meeting with the parade organizers Sruli Lazar, Mendel Piekarski, Mendel Braun, Naftoli Wilhelm, and Mendel Mintz.

They were addressed by Mendel Goldberg and Yossi Rapp.

The Mitzvah Tanks will drive through Brooklyn and Manhattan and reach thousands of Jews with whom they will put on tefillin, distribute shabbos candles, and spread the Rebbe’s message that Moshiach is on his way.

In Crown Heights, there will be no parking on President between Kingston and Brooklyn beginning from Monday, to accommodate parking for the Mitzvah Tanks.

Community members are invited to join the parade as well.

Each Mitzvah Tank will be fully loaded with all the necessary materials, such as Tefilin, Shabbos candles and more.

Anyone interested in driving a Mitzvah-tank can do so as well by signing up here: https://forms.gle/hoed1Z5k18HHRuVz5

The parade is being organized by Bochurim of the Central Lubavitcher Yeshiva Tomchei Temimim at 770, in conjunction with the Mitzvah Tank Office.

This historic event is made possible with the generous support of YOU. Please don’t delay and donate today via one of the following options:
GoFundMe: www.gofundme.com/f/70Tanks

May we merit, that just as we saw the Rebbe watching the 40 Mitzvah-Tanks parade in honor of 40 years of the Rebbe’s Nesius, may we see the Rebbe, watching and encouraging these tanks as well with the coming of Moshiach immediately.