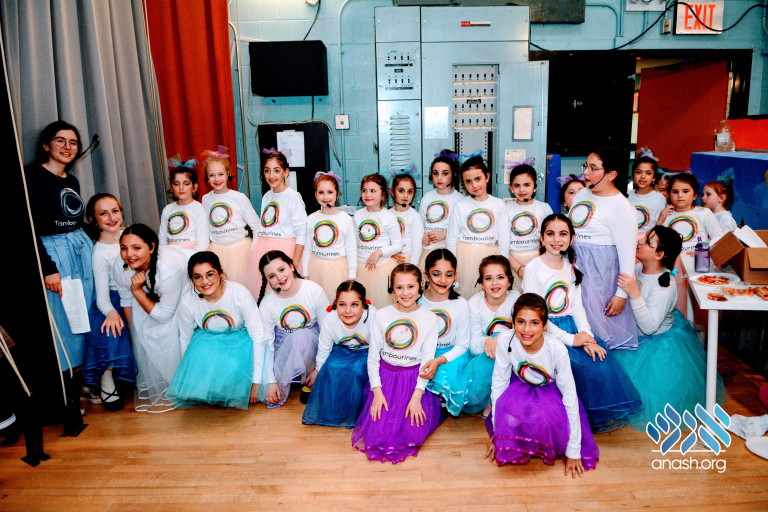 As a culmination of its successful second year, the Tambourines Academy put on an unforgettable musical based on the book “Messes of Dresses” last week.

Under the guidance of Sylvia Ascher, the studio is directed by Lea Raskin who grew up as a shlucha in Montevideo, Uruguay where performing arts was a big part of her childhood. “I know how important it is for girls to have healthy outlets for expression,” she says. “I want to provide that in our community.”

After a year of perfecting their voice skills, dance techniques, drama and performing abilities, over 50 participants aged 6 – 14 were excited to showcase their talents.

“It was my first time performing and I felt so proud and happy!” says Nechama Abelsky, a 1st grade student.

They performed to a full house of over 500 attendees in the M.J. Auditorium. The show was musical theater style in which the girls danced beautiful choreographies to insightful songs learnt in the studio, in addition to drama scenes in which the girls acted.

Each girl got her chance to shine through a solo appearance on stage, as well as a personalized award congratulating her unique contribution to the group.

After the show, parents shared the impact Tambourines Academy has had on their children. “Tambourines Academy is magical!” says Shani Junik, a mother of a Tambourines student, “It was an opportunity for my daughter to sing, dance, and perform in a Chassidishe environment with warm and loving instructors! She loved it.”

Stay tuned for next year’s classes!

Based on the book, “Messes of Dresses,” by F. Pertzig, illustrated by Tova Leff. Published and © 1995 by Hachai Publishing. Used with permission.