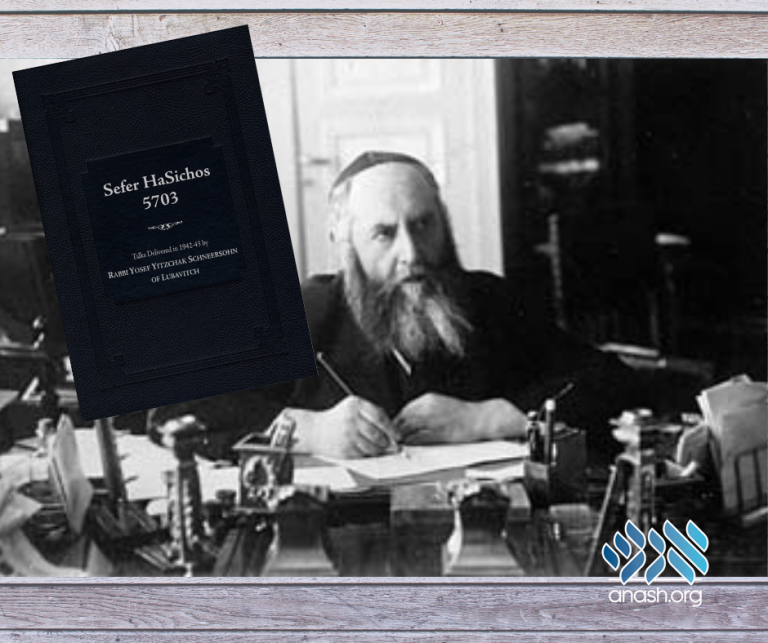 In 5703/1943, in midst of the Holocaust, while millions of Yidden are perishing, the Frierdiger Rebbe gives clear and bold direction to American Jewry. A newly translated volume of talks gives you an inside look.

Response to the Holocaust

This volume includes the empowering response of the Rebbe Rayatz to the events of his time, at the peak of the Holocaust. Not that he endeavors to avert his gaze from the harsh reality of that era. On the contrary: “One’s head is dulled, one’s heart is bruised, one’s spirit is battered.” His response, however, is a bold call to arms, an impassioned plea to his Chassidim to go out and challenge their brothers and sisters to ease the birth pangs of Moshiach by resisting the tsunami of assimilation that threatened their very survival as Jews, in the Land of the Free.

In a move that pioneered the outreach and the mivtza’im of our generation, he urged Anash to simply knock on door after door. Their task was to persuade the migrants around them to pause a moment from the local rat-race in pursuit of the golden dollar, and to salvage whatever they recalled of the time-honored values of the Old Country by enrolling their children in kosher Talmud Torah schools.

One of the widely-respected bodies that the Rebbe Rayatz criticized outspokenly in this volume was Youth Aliyah, the project by which a thousand Polish-born refugee children, many of them orphans, were rescued by self-sacrificing fellow Jews and brought to the Holy Land via India and Teheran, but were then educated in institutions whose spirit was utterly alien to the observant homes in which they had been raised. And as to the faithless and unobservant rabbis who taught in America’s after-school Talmud Torah schools, he declared outspokenly that “the fact that the prominent members of the Agudas HaRabbonim (the roof organization of Orthodox rabbis) stand aside coolly in the face of this situation is utterly incomprehensible.”

At the same time, like its five predecessors, this volume too sparkles with scores of heartwarming moments – unforgettable anecdotes, Chassidic folk history, good-humored galleries of colorful and inspiring personalities, a fascinating description of the stages by which his father, the Rebbe Rashab, groomed his young son for the historic life-work that awaited him, and of course a wealth of Torah teachings. Apart from those that are original and appear here for the first time in translation, many are teachings that the Rebbe Rayatz faithfully transmitted from his illustrious forebears. (In fact, he once described himself as “a funnel!”)