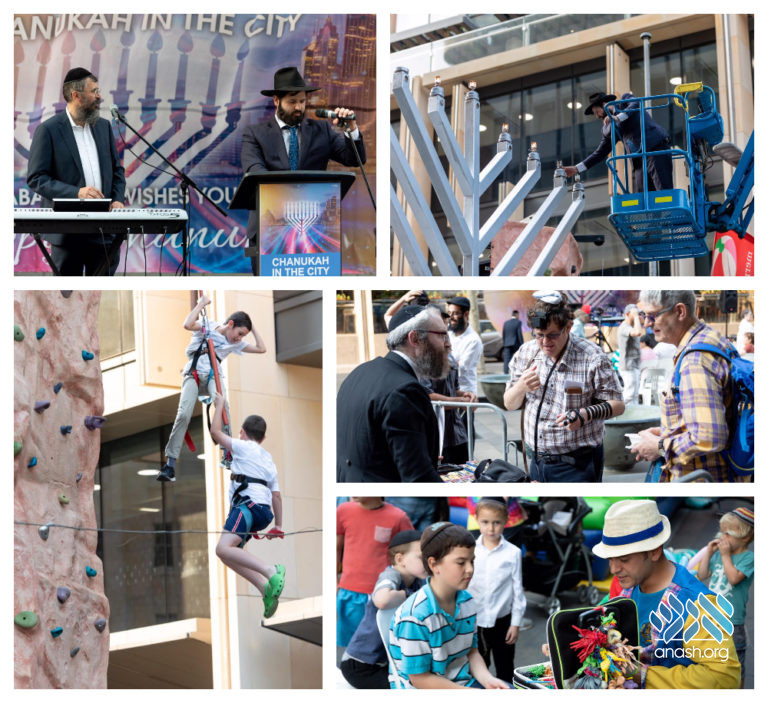 The lighting of Sydney’s Largest Menorah, attended by hundreds despite gale-force winds, was aired to millions around Australia.

Millions of people across Sydney, Australia get to share in Chanukah Celebration.

Credit goes to Channel Seven who aired highlights of Sydney’s Largest and original Giant Menorah in Martin Place Sydney, standing outside the Reserve Bank of Australia, across the street from New South Wales Parliament House and in the center of the shopping district. In addition to the hundreds who braved the gale-force winds to participate in the actual event, millions across the state and even more on facebook got to see the Seven News clips reminding everyone that we are currently celebrating Chanukah.

Prior to the event, there was a Menorah Parade with dozens of Menorah cars driving through the city reminding all of the Miracle of Chanukah. a big thank you to Benny Barukh for organizing.

Organized by Chabad Youth NSW in conjunction with Chabad CBD and Chabad NSW, Many hundreds came to the city center to hear greetings from Government dignitaries and participate in the festivities.

The event opened with Chabad Youth Director and event coordinator, Rabbi Elimelech Levy who welcomed everyone and thanked all who helped set up the event.

Rabbi Pinchus Feldman OAM, head shliach and leader of Chabad NSW to talk about Chanukah. Rabbi Feldman spoke of the importance of the Menorah, how it resembles freedom of religion, something that is not only enjoyed by the Jewish community but by so many others as well. Thank G-d, we are all free to practice our faith in freedom without the fear of persecution.

The Hon. Natalie Ward MLC spoke on behalf of the Premier of NSW, the Hon. Gladys Berejiklian MP, wishing the Jewish community well and encouraging all to continue to grow and prosper.

The Hon. David Clarke who has been Parliamentary Secretary for Justice in NSW for the past 8 years and a staunch supporter of the Chabad movement read a letter from the Prime Minister, the Hon. Scott Morrison MP. The Letter spoke of the significance of Freedom, Light and Faith.

Following the greetings, the song of Oshe Shalom was sung by Cantor Yehoshua Niasoff in tribute to the victims and survivors of the Lindt Cafe siege of 2014 which took place only meters away from the giant menorah and also in tribute to all those who have been suffering as a result of the 120 bush fires currently raging across NSW

Following the Menorah lighting ceremony, all assembled were treated to a hilarious street show and by Jamet the Unicycle unicorn and his 12-foot unicycle.