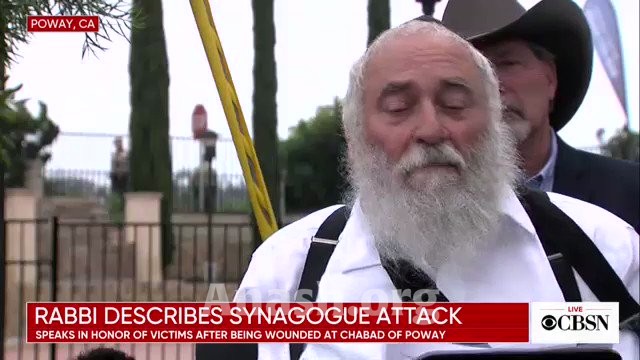 Organizations from around the world have expressed their support for Chabad after the recent horrific attack.

There are almost no words to express the shock that the Jewish nation received this past Saturday night. Around the world, as we ended Shabbos and Passover, we learned that one of our sisters, Lori Gilbert-Kaye, was brutally murdered by an antisemitic madman. I immediately spoke with the lay leadership and Rabbinical staff of Aish San Diego. They emphasized that they stood firmly behind their Chabad neighbours. I was sadly reminded of the murder a few years ago of Aish HaTorah staff member Rabbi Reuven Biermacher who was brutally butchered at the Jaffa Gate.

The Jewish people have a hero in our midst. The courage that Rabbi Yisroel Goldstein exhibited and continues to demonstrate is moving. His ability to shout out Am Yisroel Chai, that the Jewish Nation continues to live no matter what all of our enemies try to do to us was remarkable. Those that try to hurt us should make no mistake. Aish HaTorah stands strong with Chabad. All Jews must and will stand strong against those that seek to harm us. We always have and we always will.

We should also make no mistake in understanding that the Jews are being attacked from all sides. Our enemies hide behind many masks such as intersectionality, BDS, anti-Israel sentiment or antisemitism. We live in a time where Jews are being cast as immoral and uncaring. The campuses that we send our children to have become vile communities of hate aimed at Jewish young people.

Rabbi Goldstein spoke so beautifully from his hospital bed about the way Jews take tragedy and direct our energy towards making the world a better place. I pledge that Aish HaTorah will focus and target every campus in the United States where Jewish millennials attend school to make sure that those that would torment Jews think twice.

“Our thoughts and prayers are with the Jewish community of Poway, California today as their worst nightmare unfolds. There is absolutely no justification or explanation for such violence, and it is inconceivable that yet again innocent people have been targeted simply for their religion and for choosing to attend a place of worship.”

“We strongly condemn this heinous attack extend our deepest sympathies to the victims, their loved ones, and the entire community. We pray for the swift recovery of the injured and trust that justice will be served against the perpetrator of this attack. There is no room for such hate-filled violence in our society. People of all faiths must stand together and declare that we will never tolerate such hatred.”

We are devastated by the shooting at the Chabad synagogue. This was an attack on an Orthodox congregation but, more than that, an attack on the entire Jewish community.

At ADL, we grieve for the innocent who lost their lives. We pray for the victims who were wounded or traumatized by the attack. And we mourn for Jews in Poway and around the world because our collective sacred space was shattered with this heinous act of violence. We are grateful to law enforcement authorities and local leaders for their swift and determined response after this brutal hate crime.

It’s truly heartbreaking to see yet another tragedy on Shabbat but also on a day when we celebrate the end of the Passover festival. It also the six month anniversary of the shooting at the Tree of Life synagogue in Pittsburgh, the most violent anti-Semitic incident in American history.