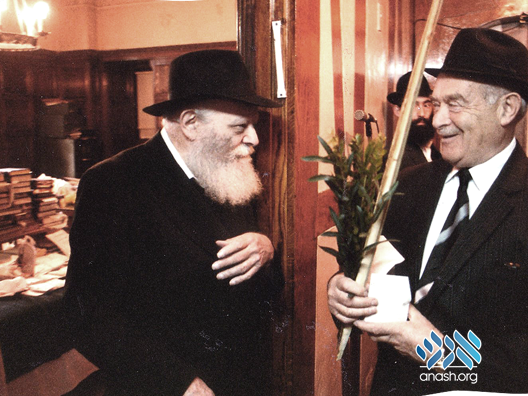 From the Avner Institute

What was it like to spend Sukkos with the Rebbe – under his personal guidance and attention?

British businessman Zalmon Jaffe merited an unusually close friendship with the Rebbe and not only spent many holidays over the years in the Rebbe’s holy neighborhood, accompanied by wife Roselyn, but recorded the bustling events in his diary “My Encounters with the Rebbe” which was published annually and widely enjoyed among the Rebbe’s Chassidim.
The Avner Institute presents here excerpts of a memorable Sukkos in Crown Heights.

Mr. Jaffe relates in his Diary:

No Ticket to Bensch

Until last year, certain bochurim took upon themselves the mitzvah of distributing numbered tickets to all those thousands of men and boys who wished to “bentsch with the Rebbe’s esrog.” It was a grand idea, in theory, and should have saved many men from waiting for an hour or so for the arrival of the Rebbe with his arba minim.

In practice, we could spend as much as half an hour waiting in line for the tickets. This Yom Tov the ticket distributors, having not only received no thanks nor appreciation, but much abuse and ridicule, resigned from their self-appointed jobs.

Now this year we had another system which worked quite well. For instance, I would arrive at 7:15 a.m. and remain rooted in my position for about ten minutes. I would then ask my neighbor to please keep my place — or I would tie a token, a gartel or towel, onto the iron railings — whilst I toddled off to the mikvah.

When I returned a little later, my neighbor would depart for a dip, whilst I kept his position in the line. I then made arrangements with another friend that he should hold my place, whilst I went for a cup of coffee — and so it went on until about 8:15 a.m. (or 8:45 a.m. during Chol HaMoed) when the Rebbe arrived with his arba minim. Sometimes the Rebbe has to change the esrog, depending on the use or misuse which is given by all these people mishandling it. I did notice that on one occasion one esrog had a pittum [pointed edge], which was very unusual.

Meanwhile one young man took the initiative of opening up a mobile library. He procured a supermarket-type trolley and filled it up with a variety of seforim [books]. He then wheeled this along the whole extent of the very long queue, shouting out his wares – “Who wants a siddur [prayer book]? A chumash [Pentateuch]? A Tanya? Tehillim [Book of Psalms]? All free — take your pick.” It was an excellent idea and many were very grateful for the chance of being able to make good use of their time whilst waiting to bentsch esrog.

After the service on the first night of Yom Tov, the Rebbe went to the large public succah to give a bracha to the orchim. He then descended the steps of 770 amidst a great tumult of singing, cheering and clapping. The noise was tremendous. The Rebbe soon arrived at the spot at which Roselyn and I was standing and he spoke to us.

The singing stopped dead — cut off as with a knife. The silence was uncanny. Everyone was stretching forward and straining one’s ears to catch whatever the Rebbe was saying to us. It was so vital and important that they should know exactly what the Rebbe was telling us!

Well, this is what the Rebbe asked: “Where are the ainiklech?” Only Golda Rivka and Levi Yitzchok stood with us — although Yossi did come dashing along the pavement, panting and very much out of breath — but just in time to be included in our “party.” The rest were missing — and so missed their chance.

The Rebbe entered the library — everyone singing lustily. He went inside — and came out to the door again for an encore. The bochurim went hysterical!!

During the morning service next day, I did learn something new. I had often wondered how did all the kohanim manage to leave the packed and overcrowded shul in order to have their hands washed before they duchenned. There were about 150 to 200 kohanim. Surely they would create a terrible disturbance by “pushing and shtupping” in and out of the shul.

I stood next to my friend Rabbi Cohen, the Rosh HaYeshiva of Kfar Chabad. He is the father of Rabbi Asher Lemech, the rosh of the yeshiva Toras Emes in Jerusalem, and of Rabbi Akiva, our own rosh of the new Manchester Lubavitcher Yeshiva.

Just before the Rebbe stepped down from the platform to make room for the kohanim, Rabbi Cohen took out a small plastic bottle filled with water, which he handed to his neighbor. This fellow was a firstborn and could therefore perform the “washing of the hands” ritual when no Levite was available. After Rabbi Cohen’s hands had been washed — he scrambled over the top of the bench and arrived directly onto the platform just in front of the Rebbe. This do-it-yourself mobile washroom certainly saved him a lot of bother and trouble.

I have noticed, that every Yom Tov there are one or two more additional young little kohanim joining their fathers to participate in the duchenning — for the “sake of their education.” It was highly amusing to see a little tiny kohen on the platform, bent almost double, and undoing his shoelaces — and a little girl doing the same.

The Chazan is Sacked

On the second morning of Yom Tov we experienced a most unusual and novel incident.

The Rebbe was standing in his usual place on the platform, completely enveloped in his tallis [prayer shawl]. The service had been in progress for just a few minutes, when the Rebbe turned around and beckoned to Leibel Groner. Leibel ascended the platform and the Rebbe whispered something in his ear.

Leibel descended the steps and said something to the chazzan [cantor]. The Rebbe seemed a little taken aback and signaled that Leibel should have spoken to Rabbi Dvorkin and not to the chazan. Rabbi Dvorkin was asked to express an opinion, and he made his usual quick decision. The result of all this was that the chazan was asked to leave the omud.

Dozens of rumors were soon flying and buzzing around — from the sublime to the ridiculous. But the answer was quite simple: This chazan was an Israeli and had to keep only the first day of Succoth. Therefore the second day was not Yom Tov for him, but Chol Hamoed [the intermediate days] and he could not officiate on our behalf.

However — although an Israeli, a ba’al habayis on a visit to the Diaspora has to keep only one day, but if he is accompanied by his household (his wife) then he should keep two days, and our chazan could have continued to daven for us.

Of all the people present in shul on that morning, it seemed that only the Rebbe, enwrapped in his large woolen tallis and not even glancing at the chazan, was the only person who realized that not only was the chazan an Israeli, but that he was in Crown Heights without his wife.

Rabbi Dvorkin explained that the same rule should apply in reverse. That is, if a man accompanied by his household (his wife) went on a visit to Israel, then they needed to keep only one day. However, many years ago, when large numbers of tourists started to visit Israel for Yom Tov and especially for Pesach, it was decided by the rabbonim that because there were so many categories of tourists travelling together in one group — for instance, single people, married with and without their spouses — that it would be better and less complicated if they all kept the second day of Yom Tov shel golus. All Israeli boys who come to 770 to study and learn for a long period should keep both days.