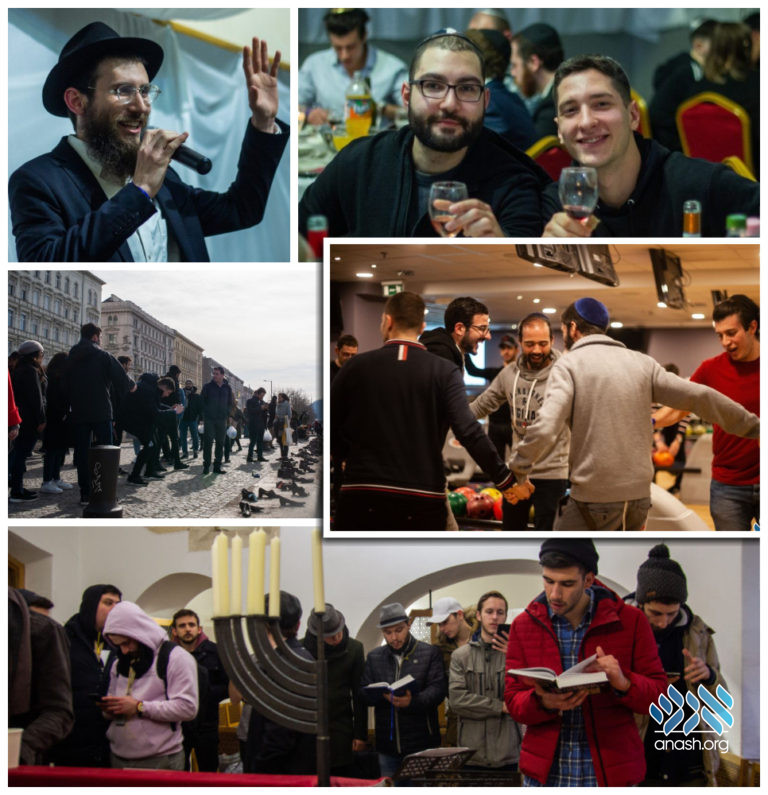 Students from Chabad Houses across Europe who participated in a special learning program were treated to an extraordinary Shabbaton in Budapest with exclusive tours and special classes.

The Shabbaton this past week in Budapest wasn’t just your usual Shabbaton.

“Not a Regular Shabbaton – Mehutton” was the slogan that brought together close to one hundred Jewish Students from all over Europe. The students gathering together for a four day long affair in the heart of the Ancient Jewish Quarter.

This special group of students completed the “Back To Me” learning program by Mehut, which included 12 weekly classes throughout the winter semester.

Together with their local shluchim, they learned key topics in Yiddishkeit from the JLI curriculum, including Tanya, the development of halacha and highlights of Jewish history.

Many of the shluchim traveled with their families to join and take an active part in the Shabbaton. Included among them were Rabbi Ariel and Mrs. Cherry Markovitch of Kiev, Ukraine, the Bard family of Marseille, France, Rabbi Yitzchok and Mrs. Devora Lea Raskin from Bucharest, Romania, Rabbi Levi Freedman from Munich, Germany and Rabbi Michi Piekarsky from Estonia.

Over Shabbos, the shluchim delivered powerful shiurim, and one student shared the story of how he began searching for his roots and discovered that his family was Jewish, though it had been hidden for generations.

Upon their arrival on Thursday morning, the students embarked on a unique tour of the Old Castle District while enjoying the advanced technology of the Budapest Virtual Tour. This was followed by a visit to the Medieval Old Buda Synagogue where Rabbi Piekarski led an inspiring minyan for mincha.

Once back, the group was able to rest in the exquisite rooms of the hotel chosen for this occasion. In the evening, they were warmly welcomed with a delicious four course dinner and words of greeting by the director of Mehut, Rabbi Zalmen Shimon Springer. During the program the students watched a JEM video of the Rebbe giving over a sicha on the topic of staying focused when learning Torah. Following dinner, the students got to know each other over some specially prepared ice breaker games.

On Friday, the students split up into groups for a perfectly organized treasure hunt around the Jewish Quarter. They discovered hidden gems by resolving challenging riddles until they reached the final meeting point in the Jewish Cultural Center where they had pizza and prizes for the winners.

Friday night began with a thought provoking game, followed by a captivating class shiur with Rabbi Freedman. Rabbi Eisenberger then led the group in a lively Kabbolas Shabbos.

For the meal, a large group of local Israeli Students who are studying in Budapest joined the group, along with Rabbi Boruch Oberlander, head shliach and Chief Rabbi of the Orthodox Community and Rabbi Shmulik Raskin, director of Chabad House Keren Or for Israelis and tourists. Mr. Avi Klein came as a special representative of the local community.

On Shabbos morning, after a rich breakfast, the students davened in the hotel conference room which was transformed into a shul. Many had the merit to receive aliyos after taking it upon themselves to strengthen their fulfillment of Mitzvos and to influence their friends as well.

A spontaneous farbrengen followed the Shabbos meal, after which the students had a Q&A panel during which they were able to bring up relevant issues surrounding Yiddishkeit today.

After a joyful Havdalah, everyone got ready for a breath-taking night tour of the city, which ended with a bowling party arranged exclusively for them. There was music, a fresh Melave Malka bowling and billiards.

Sunday morning, led by Rabbi Springer, the group visited the ‘shoes memorial’ by the Dubane River where they spent a long while singing moving songs and hearing inspiring words from the Rabbis.

The buses then moved on to the charming town of Szentendre, where they paid a visit to shliach Rabbi Mendy Mayers who recently opened a brand new Chabad House.

The Mehut students and shluchim are looking forward to the next round of Torah Classes, and of course, they eagerly await the next Mehutton!

Mehut is an organization with offices in Brussels and Israel. It offers educational programs to shluchim working with Jewish students (18-28) across Europe. Students who complete its flagship study program (the “Back To Me” Program) are awarded a free trip, also known as the Mehutton. The organization is directed by Rabbi Zalmen Shimon Springer from Milan, Italy. Mehut is a partner of the ECJS, and is made possible by the EJA and the Meromim Foundation, under the auspices of the RCE.