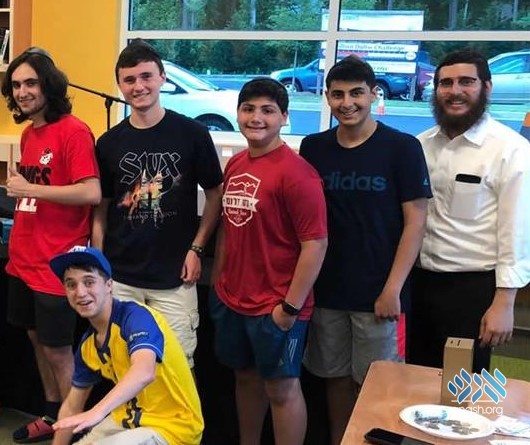 Come 7 p.m. every Monday and Thursday, Hannah Wise, of West Bloomfield, Mich., puts everything on hold. For the past year, the 16-year-old has been joining thousands of high school and college students across the United States and Canada who have been connecting to their Jewish heritage through a text-message program called “JText” to supplement their Jewish education, connect with peers and have a little fun at the same time.

Wise went to a Jewish day school for a while, but no longer does, and “JText keeps me informed on Jewish basics,” she tells Chabad.org. “I just feel more connected to the Jewish community when I do it.”

JText has become a continental initiative since its launch about four years ago, now being shared by Chabad centers from Contra Costa, Calif., to Calgary, Canada, through local CTeen and Chabad on Campus chapters. Its goal is to educate teens on the religious, historical and cultural aspects of Judaism in an age-appropriate and entertaining way. The slogan is: “Be seven at seven”; twice weekly, at 7 in the evening, trivia questions are texted to Jewish teens who are part of separate regional groups.

The seventh player in a group to answer a multiple-choice question correctly wins the round, taking home a $20 Amazon gift card. If a player doesn’t answer correctly, he or she receives a message with the correct answer, as well as a link to a website like Chabad.org, where they can read up about it. With larger groups, even those who don’t win can still accumulate points, redeemable at the end of the year at a gala auction held by each group.

Joseph Levy, 22, an undergraduate student at Georgia Tech, has been participating in JText for two months now. “Winning is incredible; you feel good when you get the answer right,” says Levy. “JText does a great job getting people on campus twice a week to think about something Jewish—even if it’s just for two minutes—and then rewarding you for knowing something that other people may not know.”

Players enjoy the wide-ranging variety of questions; a favorite of Wise’s was a historical one about “probably the oldest, still active synagogue in the world, which was in Prague. I didn’t know that, and I thought that was really cool.” (The “Altneuschul” or Old-New Shul, built circa 1270, is the oldest synagogue in continuous use in the world.)

Meeting Young People Where They Are

The program began four years ago when Nechama Dina Kantor, a seasoned Chabad emissary with two decades in the field behind her, was faced with a new challenge. Kantor, who co-directs Chabad Lubavitch of Westport, Conn., with her husband, Rabbi Yehuda Leib Kantor, was at a loss. Teens attending their programming were absorbed with their screens, instead of the activity at hand. Rather than fighting a losing battle, the Kantors met the teens head on. “Wouldn’t it be cool if we did something which uses the technology that the kids of this generation seem to respond to?” recalls Rabbi Kantor.

The Kantors contracted a programmer, who helped them create JText. They immediately saw extensive engagement from local teens, with between 60 percent and 70 percent of recipients engaging with the questions, with the number of participants growing each week.

With motivation and engagement high, Kantor began to offer the program to other communities. “We knew that there’s a successful element here, and we started offering it to other Chabad Houses, both for teens and for college campus; on the campuses, it gets an even higher engagement,” says Kantor.

A Boost for Teen Engagement

Rabbi Elchonon Chaikin, who with his wife, Mussie, run the Sinai Initiative, directing programming for teens, college students and young adults at Chabad of Greater Dayton, Ohio, says that JText has boosted teen engagement significantly and brought local teens together. “We’re getting involved teenagers every single Monday and Thursday; the teens remember there’s a JText on those nights, and we know that our teens are active; they see us, they hear from us.”

Before Chaikin began offering JText, teen programming presented a challenge: “We went from program to program without having any real contact in between; we couldn’t really create a teen community, a teen group. It was very difficult for us, but now, teens who don’t necessarily go to the same school are being united through JText.”

The Chaikins, who only recently began offering JText, are already seeing the impact it has had; they recently held a Friday-night dinner for their CTeen chapter, and more than a dozen teens attended—a big success for them. “The first thing they were talking about was who had won JText the night before; it’s active in their life,” they noted.

Unlike many larger Jewish communities, Dayton has no local Jewish high school, which means that for many teens, JText may be their only source of ongoing Jewish education, providing them with valuable knowledge of their traditions and history. Chaikin has seen the effect that a question can have on an entire family—in fact, it was with one of the first questions they sent, a fairly difficult one.

“The whole family was talking about it; it went from obviously doing a quick Google search to being the topic at the supper table. All of a sudden, the kids were asking questions about this idea.” The next day, Chaikin recalls, he met a parent who asked what the correct answer was, and it jump-started a productive conversation.

Originally intended for high-schoolers, JText is now being run on dozens of university campuses around the country and even for some Chabad Young Professionals chapters. While not originally intended for the college crowd, Kantor took note when teens who had gone off to college continued responding to the text messages. “We recognized that it was actually something that didn’t stop at any particular age.”

Levy, a former student coordinator for Sinai Scholars (Chabad on Campus’ student learning initiative) found that when calling students to sign them up for courses, many were too busy to commit to an hour or two of weekly study. “The reason I think JText is effective,” he says, “is that commitment is low, but you’re still learning something on a consistent basis, which makes it a good structure.”

In many regards, the idea is forging new inroads in the Lubavitcher Rebbe’s philosophy; that all of G‑d’s creations should be utilized in G‑dly service. As Kantor says, “the Rebbe wants us to be creative in this manner, especially with technology.”

Connecting with teenagers using more modern means has allowed emissaries to engage even those who would otherwise never consider walking through the doors of the traditional brick-and-mortar synagogue or Chabad center.

Mussie Ciment, Kantor’s daughter and creative director of JText, received a message from a satisfied parent, reading: “Jessie recently told me that she always plays the JText game, and that’s her only link to Judaism at this point. Both my kids have rebelled and separated from Judaism, so anything good enough to keep the ties to their religion is worthwhile. I don’t want to push her to get closer, for doing it on her own will make it more meaningful for her. Thank you.”