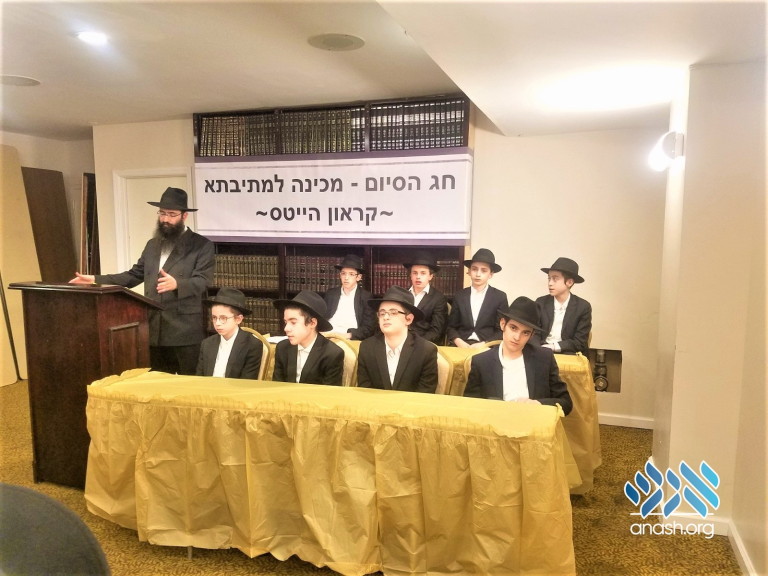 The program highlighted the outstanding achievements of the group of Bar-Mitzvah age bochurim who had devoted themselves to Torah and avodah throughout the year. Under the leadership of Rabbi Yitzchok Wolf, an experienced mechanech for bochurim of this age, and Rabbi Sholom Ber Wolberg, the class learned on a level appropriate for Yeshiva Gedolah.

The audience was astounded to hear that the bochurim had mastered Maseches Makkos with all Rashi and Tosafos, as well as many Rishonim and Acharonim; 110 dafim of Gemara L’girsa; 135 Simanim of the Alter Rebbe’s Shulchan Aruch; 53 Perakim of Mishne Torah; half of Sefer Vayikra; 40 Perakim of Tanya; and many Maamorim and Sichos.

Each of the bochurim presented part of a hadran from the Rebbe on one of the Masechtos they had learned. And like all the speakers on the program, they each spoke in Yiddish.

“As you go forward to Mesivta,” Rabbi Wolf told the graduates, “Remember how much you can accomplish if you use each moment to its fullest.”

Rabbi Wolberg read a letter of the Rebbe to bochurim celebrating a Chag Hasiyum, deriving a lesson from the fact that even a room full of seforim still requires a mezuzah. So too, the Rebbe writes, a bochur who has learned a lot of Torah must ensure that the Torah does not simply remain in his head, but rather penetrates his entire being, inspiring him to serve “Hashem Echod”, as the mezuzah attests.

It is to this end that Mechina L’Mesivta had provided the bochurim with a full program of Chassidishe hashpoah over the year, supplementing their learning with many farbrengens, Shabbos Seudos at their teachers’ homes, a Shabbaton, and trips to 770 and the Ohel. Rabbi Wolf thanked each of the many noted mashpiim who had participated in the Mechina’s special events, as well as those who had given weekly shiurim on special topics such as Toldos Chabad, Jewish history and Inyonei Geulah UMoshiach.

Rabbi Motty Lipskier of The Beis Medrash commended the bochurim for their courage. “Whenever doing the right thing requires being different,” he said, “remember that a live fish swims against the tide.”

Rabbi Shlomo Sternberg thanked the hanhallah of Mechina L’Mesivta on behalf of the parents. “I would never have dreamed that such a thing would be possible,” he shared. “Our young boys have matured over the course of one year into bochurim who are serious and passionate about learning Torah. Every one of us should see to it that the yeshiva grows and continues to have the incredible success that it has had.”

The participants at the Chag Hasiyum were excited to hear that the Mechina will b’ezras Hashem be expanding next year with a Mesivta Shiur Alef class, taught by Rosh Yeshiva Rabbi Yosef Shmukler, previously Rosh Kollel in Manhattan, and Mashpia Rabbi Yaakov Klyne.

For further information about Mechina L’Mesivta or the new Mesivta, contact rabbiyitzchokwolf@gmail.com.