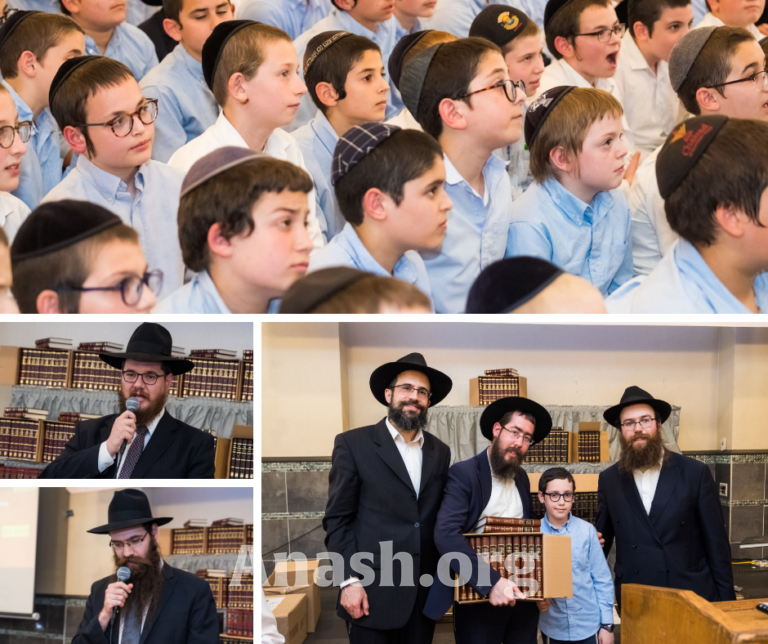 A novel celebration took place on Sunday, as sixth grade boys and their parents gathered in Crown Heights to mark the completion of a year long commitment to mastering pages of Gemara inside.

The program, called Gemara Bifnim, is a project of Crown Heights based Igud Hamelamdim. The program, which just completed its second year, is available in nine schools across the US and Canada. Many schools which are eager to join have been placed on a waiting list as the program makes plans to expand.

“While being able to read the Gemara inside is assumed to be basic to learning Gemara,” explains Rabbi Avrohom Bluming, the director of the organization, “the reality is that it is becoming a growing challenge. Children nowadays are finding it ever more challenging to focus on words on a page, and it really hits them hard when they enter yeshiva. We came up with a revolutionary way to give the children these fundamental skills in an exciting manner.”

How does it work?

The innovative program has grown to include five elements to maximize comprehension and retention. Educational tests are given as a means to guide the student in deciphering the text. Back Chazara is a rigorous review system that has the students constantly reviewing what they’ve learned so that it remains with them. Yegiah awards points for effort, an important part of learning which should be recognized and emphasized. The final two elements involve building consistent review habits:  the Daily Chazara Phone System allows students to record themselves for 5 minutes each day, and Shabbos Chazara requires them to review the Gemara they learn each week with their father or another adult.

Every three weeks, each class took a written test on all of the material covered. Boys were given a Gemara to look inside of, and questions were focused on deciphering the Gemara’s give-and-take. For each question answered correctly, the boys earned points towards prizes at the end of the year.

Appreciation poured in from teachers and students alike for the reinforcement of this fundamental learning skill.

At the event, Rabbi Avrohom Bluming spoke about the importance of studying inside. “This is how you acquire the Torah,” he told the students. “By focusing on the text, this will give you long-term access to learn Torah.” He encouraged parents to take the time to listen to their sons read from the Gemara at least once a week to help them develop this valuable tool.

A highlight of the program was a siyum on Perek Hamafkid made by Nosson Labkowski, a talmid of ULY who beautifully explained the last piece of the perek.  The boys also enjoyed hearing a remarkable story of the Alter Rebbe and the sweetness of Torah, told by storyteller Rabbi Shmuli Zalmanov.

Rabbi Hillel Zaltzman, author of the popular book “Samarkand,” recalled his days as a talmid in Russia. The boys learned these same Gemaras, while hiding from the government and running from one place to the next. His melamed, Reb Benche Maroz told the boys that Tomchei Temimim is like an oven; if you will learn with a chayus now, then later it will stay with you. He encouraged the talmidim, urging each one to consider that the whole Tomchei Temimim was made just for him, and therefore he must learn with a great chayus!

Rabbi Pinchos Margolis, principal of Cheder at the Ohel, shared his appreciation for the program. “As mechanchim know, one of the greatest challenges in learning is to get the students to master the text bifnim. With the mivtza, the boys didn’t only master learning inside, they were actually excited about it. It was really, really amazing.”For information on the program, visit: IgudHamelamdim.org/Gemarah-Bfnim-Mivtza-Torah