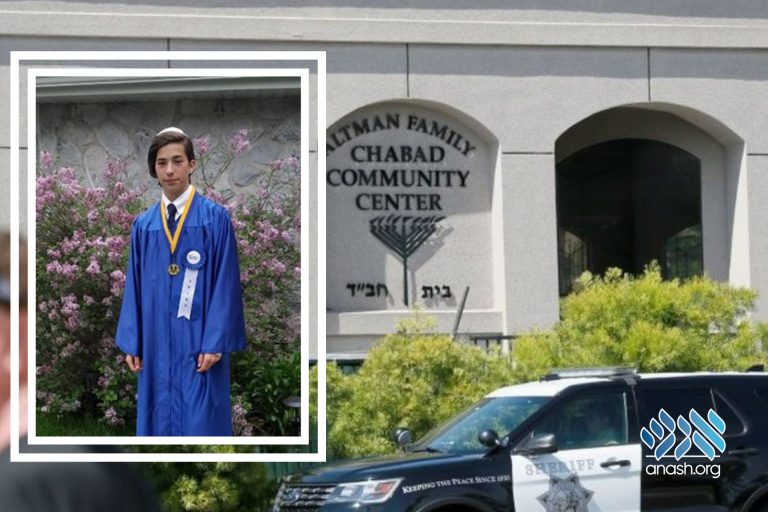 During his graduation ceremony, Mitchell Leshchiner wanted to make a bold statement. Putting on a Kippa, was the best way he could do it.

When Mitchell Leshchiner, 14, walked across the stage of his middle school graduation Tuesday, not only was he proudly wearing his graduation robe and the medals he earned for his various school accomplishments — on this special day he also decided to wear a kippah.

The Vernon Hills, Illinois, public school student says he doesn’t usually wear a skullcap, but felt compelled to do so in front of his graduating class of about 150, along with their parents and guests, after the recent shooting at Chabad of Poway near San Diego, California.

“I just think especially after the shooting, it was important to make a statement that we’re still here, and that no matter what happens, we’ll still be here,” he explained to Chabad.org. “I wanted to stand up against anti-Semitism.”

And so, he walked across the stage wearing a white kippah with a gold Star of David on it. The kippah was given to him in the days following the Poway shooting by Rabbi Shimmy Susskind, who directs the Chabad Jewish Center of Vernon Hills with his wife, Rochel.

Mitchell’s band – he’s in a group that plays Jewish music – performed at a Chabad event aimed at taking a stand against anti-Semitism, and the rabbi gave it to him to wear while he played.

The teen says he was also very motivated by his uncle, who’s heading to Israel in August to be a lone soldier in the IDF. “I showed him the kippah and told him I was wearing it during graduation,” the teen says. “He’s a big motivator of Judaism for me; he really got me more in touch with my Jewishness.”

Leshchiner says he previously had been wearing a kippah at least once a month to school with some friends, inspired as well by his Sunday school studies at Chabad and by his bar mitzvah. He adds that his actions have been well-received at school, where he estimates there are some 20 or 30 Jewish students out of the 150 in his class. “Our school is very accepting,” he says. During graduation, he got a lot of smiles, he says, and a hearty “mazel tov” from the superintendent as he shook hands with the school representatives on stage.

Looking ahead to high school, he says he’s excited to be part of his school’s Jewish student association, and more importantly, to continue to wear his Jewish identity with pride. “I hope anti-Semitism stops, and despite the fact that tragic events happen, that Jews will still be there and we will stay together,” he explains.

Rabbi Susskind says he called the teen right away when he saw the pictures of Leshchiner wearing a kippah at the graduation. “I congratulated him for doing something special,” says Susskind. “I thought it was very courageous, I wanted to give him a ‘thumbs up’ for what he did,” the rabbi says. Wednesday, the day he saw the pictures, happened to be his birthday, added Susskind. “I told him it’s the best birthday present I’ve ever gotten – for somebody to be inspired by Chabad to do that.”