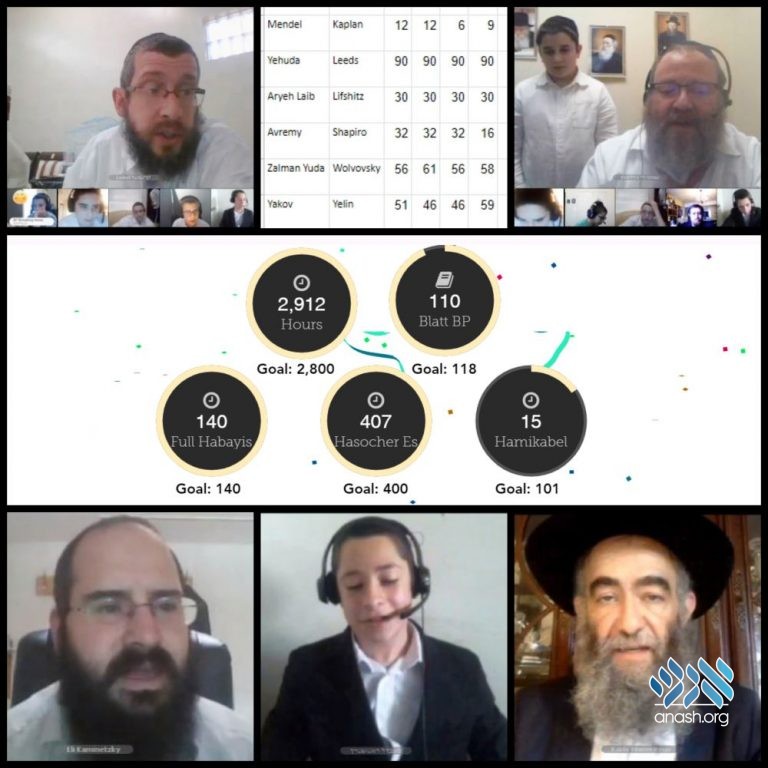 Talmidim of the Shluchim Online School took on a massive project in honor of Yud Alef Nissan. What followed was a five-month lesson on commitment, innovation and the power of utilizing time wisely.

When Rabbi Mendel Katz, shliach to Buffalo Grove, Illinois first shared an idea of a special gift from his Shluchim Online School class to the Rebbe, he didn’t know how far his students would take it.

“It all started when Rabbi Katz told us a story,” said Mendel Tiechtel of Lawrence, Kansas. “A class decided to learn the whole Perek Bava Kamah by heart as a birthday present for the Rebbe’s seventieth birthday.

“The next kid who had his birthday went for yechidus and told the Rebbe what their class was doing. The Rebbe told him that it is causing great nachas ruach, and people should see what you are doing and copy you. So that’s what we did.”

The boys responded with enthusiasm, immediately springing into action.

“The class took upon themselves a goal of collectively learning 1,000 hours of gemara on their own time before Yud Alef Nissan,” Rabbi Katz told Anash.org. “Kids were learning extra hours every day – they really kicked in, setting up chavrusas to learn after school. Instead of watching videos, they were learning gemara.”

Together, they ended up learning 1,400 hours and 75 blatt gemera baal peh in time for Yud Alef Nissan. They decided to continue after Pesach, doubling their goal.

“Three boys set up a website so the class could track their progress. They also put up things on the site that helped them learn the gemara,” Rabbi Katz said.

The website was directed by three of the B7 students – Mendel Tiechtel, Mendel Kaplan and Levi Bitton. To help their classmates, they created quizzes, lists of commonly found words and their translations, and uploaded the gemara texts. In addition to aiding the boys in their learning, it cultivated a feeling of enthusiasm and kept the momentum going.

“By the end of the year, the boys had learned 2,900 hours of gemara and memorized 110 blatt gemara – all on their own time, without any incentive,” Rabbi Katz marveled.

The project increased the talmidim’s commitment to learning and gave them a sense of accomplishment, but that’s not all, they say. Looking back, they feel it was a worthwhile investment of time they may have otherwise wasted.

“Rabbi Katz would encourage us to make a few Chavrusas daily and give a commitment on Thursday for how long we would learn,” said Yoseph Labkowski of Oakland, California. “Before that, I didn’t just sit down, call a friend to learn by myself for 2-3 hours daily. I used to spend a lot more time being bored on my computer or reading a book.”

Mendel Rothstein of Nashville, Tennessee agrees. “When you learn Torah, your mind gets taken off from other devarim b’teilim,” he told Anash.org. “Doing something beyond nature for the Rebbe’s birthday taught me that I can accomplish goals no matter how hard they are and [gave me] a sense of responsibility.”

The class celebrated on the last day of school with a special party. “The parents were happy, and the boys felt so accomplished,” Rabbi Katz said.