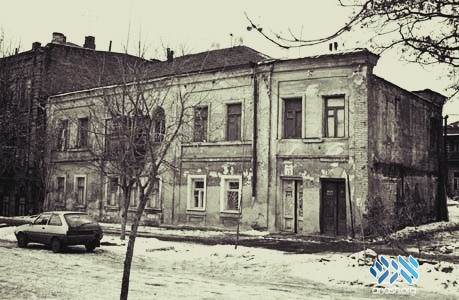 The house where R. Yisroel Aryeh Leib grew up.

Reprinted with permission from Yagdil Torah

Documentation of his date of birth and bris

His official documents lists the following:

Father: An esteemed man of his generation, Levi son of Zalman Schneerson

Born May 3, Circumcised 15 May

His close connection with the Frierdiker Rebbe

R’ Yisroel Aryeh Leib was a regular presence at the Frierdiker Rebbe during his years in Leningrad, up until the Frierdiker Rebbe’s departure in 1927. In 5750 the Rebbe wrote that that his brother was “extremely adored by the Rebbe Rayatz, who gave him personal attention. He was also adored by the Chassidim who surrounded him and argued with him about different issues in Halacha and Chassidus. Many questions were posed to him in both nigleh and Chassidus”.

He would often enter the yechidus room of the Frierdiker Rebbe to discuss Chassidus. In one episode the Frierdiker Rebbe refused to answer one of his questions, claiming that he was not a fitting recipient for the answer. Disturbed by this response, R’ Yisroel Aryeh Leib left the yechidus and broke into tears. In their following meeting, the Frierdiker Rebbe raised the issue again and, surprisingly, offered the solution which he had previously held back from him. R’ Yisroel Aryeh Leib offered the Chassidim his own interpretation: To be a fitting vessel for the answer, he had to first break his ego with bitterness and tears.

In the spring of 1930 when the Soviets were cracking down on dissidents, he managed to leave Russia with a fake name Mark Gurari. He arrived at the Rebbe and Rebbetzin’s home in Berlin with the disease typhus. At great personal risk of infection, the Rebbe and Rebbetzin nursed him back to health and they spent the following two years together in Berlin.

Hiding the Petira from Rebbetzin Chana

In 1950 he managed to relocate to England, subsequently enrolling in a PhD program at Liverpool University in theoretical physics, which he did not complete, before his sudden passing on 13 Iyar 5712, at the age of forty-six.

Rebbetzin Chaya Mushka, who was the first to hear the news, was immediately concerned as to how Rebbetzin Chana would react. She had suffered over a decade of Stalinist oppression, the untimely passing of her younger sister Miriam Gittel, the prolonged suffering and premature death of her husband, and the loss of both her mother and son in the Holocaust. Was she able to withstand yet another huge loss? The Rebbe felt that she could not, and chose to conceal the tragedy from his mother.

For the following twelve years the Rebbe would forge a brief line of good wishes and his brother’s signature to letters sent from R’ Yisroel Aryeh Leib’s Widow, Genia, to Rebbetzin Chana. This would maintain the impression that he was still alive. You can see excerpts from these letters below.

In 1975 the Rebbe tried to get an academic paper penned by his brother R’ Yisroel Aryeh Leib published posthumously. After R’ Yisroel Aryeh Leib’s passing, an incomplete study into an area of advanced mathematics (written in German) was found among his possessions, and through a relationship that the Rebbe developed with mathematician Paul Rosenbloom, it was eventually published in 1978 as The Location of Eigenvalues and Eigenvectors of Complex Matrices in the Journal of Approximation Theory.

Rosenbloom first met the Rebbe in 1963, after an encounter with Chabad shluchim Rabbi Moshe and Mindy Feller, who had just begun to establish Chabad activities in Minneapolis. Before departing, the Rebbe had advised Mindy, who had recently graduated in mathematics from Hunter College, to seek a teaching position in a local university as part of her Shlichus. That is how Rosenbloom, who was head of the Department of Mathematics in the University of Minnesota at the time, came into contact with Chabad, ending up in yechidus a year later. The relationship blossomed. Gradually becoming an observant Jew, Rosenbloom moved to New York, taking a position at Columbia University.

On his regular visits to 770, Rosenbloom would present the Rebbe with his most recently published paper. One day in 1975, Rosenbloom received a call from Rabbi Leibel Groner asking if he knew of a mathematician who could read German. Rosenbloom replied that a more pertinent issue was the content of the paper than its language, and he agreed to take a look at it. The next day when the paper arrived, Rosenbloom was somewhat confused. “It had introduction, and no conclusion: he recalled.” There were some elements that were well known and there were aspects that appeared to be new”.

“I figured that this must be someone who has no access to a library,” Rosenbloom explained to himself, “and I thought it might be some Russian refugee that the Rebbe is interested in helping.”

At the next Farbrengen he attended (10 Shevat, 5735), Rosenbloom presented the Rebbe with a written evaluation of the paper and some suggestions on how to make it publishable.”It needs an introduction. It needs references and the manuscript is not complete,” Rosenbloom said. “The author is deceased,” the Rebbe informed him.

The Rebbe asked Rosenbloom if he could find a student to work on the paper to prepare it for publication, offering to provide financial compensation. Rosenbloom was hesitant. The material was too advanced for a graduate student and no professor would be interested on working on another person’s paper.

Realizing that the matter was important to the Rebbe, he offered to do the work himself. It was only at this point that the Rebbe made a full disclosure. “I was not willing to tell you who the author is, not to influence you, but it was written by my brother. He was younger than I am and he has passed on. This is the only thing left of him.”

When Rosenbloom commented that the author did not appear to have access to a library, as he cites no references, the Rebbe explained, “He was an independent character. He was not willing to look at anything… Only afterwards would he look in a reference to see if someone had explained the same thing.”

Working on the manuscript the entire summer, Rosenbloom discovered that R’ Yisroel Aryeh Leib had independently reached the same conclusions as some prominent mathematicians though he had done so with different proofs. The paper was published three years later. The Rebbe instructed Rosenbloom not to make any mention that the author was the Lubavitch Rebbe’s brother as he wanted it to stand on its own merits.