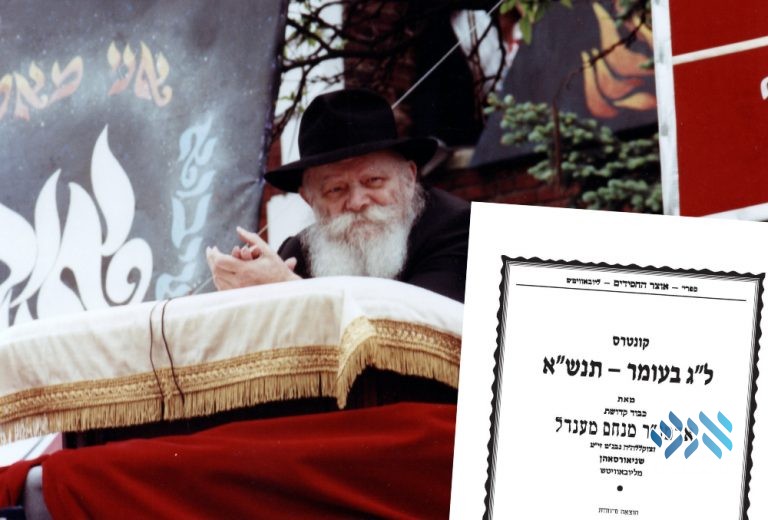 In honor of Lag B’Omer, Lahak Hanachos published a special edition of the last ma’amar the Rebbe edited for the special day.

The Rebbe’s farbrengen on the eve of Lag B’omer 5710 opened with the following words:

“Our Sages say that everything is referenced in the Torah. Obviously then, Lag B’omer is indicated in the Torah as well. Chassidus points out two such references: 1 — the verse ‘Eid hagal hazeh,’ (Vayetze 31:52), and 2 — the verse ‘Gal einay v’abitah niflaos b’torasecha,’ (Tehillim 119:18), for the word Gal also spells Lag (b’omer). We can therefore suggest that this indicates the importance of studying and disseminating Chassidus (the focus of Lag B’omer, the Matan Torah of Torah’s inner dimension), specifically in our times.”

The Rebbe concluded this special farbrengen (printed in Toras Menachem vol. 1 pg. 56) with the following words:

“Every individual must occasionally envision the Rebbe’s holy countenance, and recall the words he heard from the Rebbe. Those who never saw the Rebbe can envision his holy face through a picture, and study from his Torah. We need to remember that we have a holy father… and therefore, we have no reason to worry.

“We can add to this by visiting and by hishtatchus at the Ohel, for the location of the lowest element of the person — his body —  is profoundly connected to his Yechidah… Therefore, I would like to suggest that tomorrow, on the day of Lag B’omer, Yom Hilula of Rashbi — the day of his joy, of the greatest joy, likened to a wedding — everyone should travel to the Ohel, where Rashbi is present as well.”

In a Sicha on the eve of Lag B’omer 5751, the last Lag B’omer we merited to hear a Sicha from the Rebbe, the Rebbe said, among other things:

“There is another fundamental point regarding Lag B’omer and its connection to the Geulah:

“We can link this occurrence with Rashbi’s ‘Day of Joy’ as well:

“Rashbi was one of those five students of Rabbi Akiva who ‘reestablished the world’ after Lag B’omer, and he conducted himself with the highest possible standard of Ahavas Yisrael and Achdus Yisrael. This is demonstrated in their title ‘chevraya, colleagues’ — indicating the chibur, the connection and unity among them, to the extent that they became one, through Ahavas Yisrael and Achdus Yisrael.

“This concept is also emphasized in Rashbi’s famous teaching on the verse “Hinei mah tov umah na’im sheves achim gam yachad, how good and how pleasant it is when brothers dwell together” (which has a special association with Lag B’omer), which expounds on the topics of Ahavas Yisrael and Achdus Yisrael.

“And this is the connection to Geulah: Golus is the result of behavior which is the opposite of Ahavas Yisrael (as explained in Maseches Yoma), so, in order to negate the Golus, we need to add and intensify our Ahavas Yisrael, thereby nullifying the Golus and ushering in the true and final Geulah.”

With the approach of Lag B’omer that year, the Rebbe edited a Maamar, “Gal einay v’abitah niflaos b’torasecha,” which he had delivered on Shabbos Emor, 19 Iyar, 5737-1977. The Maamar expouns on this verse with profound depth, and explains its connection to the verse “Eid hagal hazeh,” mentioned during the beginning of the 5710 farbrengen. This is the final Maamar — so far — that the Rebbe edited and disseminated for Lag B’omer.

There are currently many individuals who are in need of blessings and miracles from heaven. Hayom Yom describes Lag B’omer as a special Yom Tov by the Mitteler Rebbe, where many miracles took place. Strikingly, the Rebbe’s Kapitel this year is 119, which contains the above-mentioned verse “Gal Einay” and its reference to Niflaos, miracles.

Therefore, with the approach of Lag B’omer, Lahak Hanochos has published a special edition of the Maamar, a sample of Toras Menachem — Sefer Hamaamarim Iyar. May it be a merit for a complete recovery for the Gabai of 770, Reb Zev Katz sheyichye.