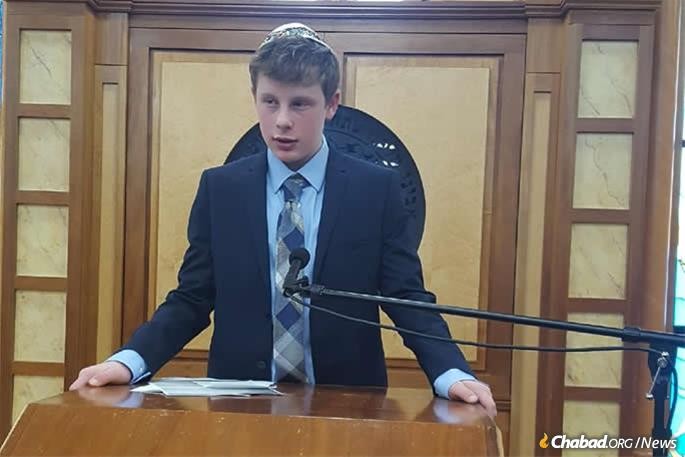 For parents of children with special needs, day-to-day activities come with a host of challenges. Balancing various therapies can eat up hours and energy. When it comes time for the traditional Jewish rite of passage for boys, a bar mitzvah, it sometimes seems like an insurmountable challenge.

She was resigned to skipping a bar mitzvah ceremony for Jonathan until one day, he made clear what he wanted. “All of a sudden, when he was 12, Jonathan said, ‘Can I have a bar mitzvah?’ This is a child who had never asked for anything, not even a toy. We believe he asked because his teacher was talking about planning her own son’s bar mitzvah.

“And I said, absolutely, yes!” she continued. “From that point on, it became kind of this quest that I need to find a synagogue that would give Jonathan a bar mitzvah.”

“I know there are other places that are receptive to children with special needs, but at the Chai Center, when I approached them, they didn’t have to stop and think about it. They didn’t need to know anything about my child and his functioning abilities first. There were no questions asked—just a yes, we’ll do this,” related Caryn. “Rabbi Dovid had the most wonderful relationship with my son. The two of them laughed together. It was wonderful to see.”

Not too far away, Jenn and Brent Kaufman’s son Justin, who has autism, was also approaching bar mitzvah age.

“He’s in the middle of the spectrum, and my husband and I were always going crazy doing all these therapies,” said Jenn. “It’s exhausting, and we weren’t thinking about a bar mitzvah; we were overwhelmed.”

With encouragement from Brent’s father, Sy, the Kaufmans decided to see if a bar mitzvah for Justin was possible. Going to the synagogue where her husband had had his bar mitzvah years earlier wasn’t going to work, and the Kaufmans were at a crossroads until a friend suggested they contact the Chai Center of Dix Hills.

“Rabbi Dovid was amazing,” she said. “He was so kind and good-hearted. All rabbis are special, but I wouldn’t have been able to do this with any other rabbi. He got my kid, he cared for my kid and just showed him so much compassion. He was so nice to me, and he kept saying, ‘Don’t worry, Mom, it’ll be OK.’ ”

For his part, Weinbaum noted that he was inspired by the Rebbe—Rabbi Menachem M. Schneerson, of righteous memory—who stressed that every child, regardless of their abilities, deserves to be involved in Jewish customs, traditions and perform mitzvot.

“Just because Hashem gave someone a challenge doesn’t mean they are different. We all have challenges,” said the rabbi. “Why should someone with a challenge not be able to celebrate a bar mitzvah?”

He explained that for him, the challenge was figuring out the best way to communicate with each child.

“But that’s true of any kid,” he said. “I have to find what they are into—sports, politics—and learn to work through that. In this case, one of the boys loved getting a treat when we were learning, so we always had that waiting for him. The other boy learned best when I put the words in very large print in front of him so he could read them. He also loves to laugh, so I had to find a way to communicate through that.”

‘He Exceeded All Our Expectations’

Over the last month, at separate ceremonies, both boys were called to the Torah and celebrated their bar mitzvahs surrounded by family and friends.

“The day of his bar mitzvah, Jonathan stood on the bimah in his tallit and yarmulke,” said his mother, Caryn. “I was so proud of him. And his younger brother participated in the ceremony and said the Shema with him. For many years, I thought this was something that was out of the question … but it seems there really are people who want to help make your dream a reality. All you need to do is pick up the phone.”

Said Jenn, “On the day of Justin’s bar mitzvah, everyone was crying. Here’s a kid who didn’t have a whole lot of language skills when he was younger, and to see him engage with the rabbi and respond to him … it was the most amazing thing I’ve ever seen in my life.

“Justin did so well he knew the prayers, and he was so happy,” she continued. “He exceeded all our expectations. I didn’t know it could be so wonderful! It really is the best thing.”

As for Weinbaum, both bar mitzvahs proved to be extremely emotional. “To me, it was a feeling of pride for the families, pride for these two boys, and a feeling that this is true ahavat Yisrael, true loving of your fellow Jew.

“To watch these two boys say the blessing over the Torah was a lesson to me that if you put your mind to it, you can accomplish anything,” he continued. “I learned way more from these boys than they learned from me.”