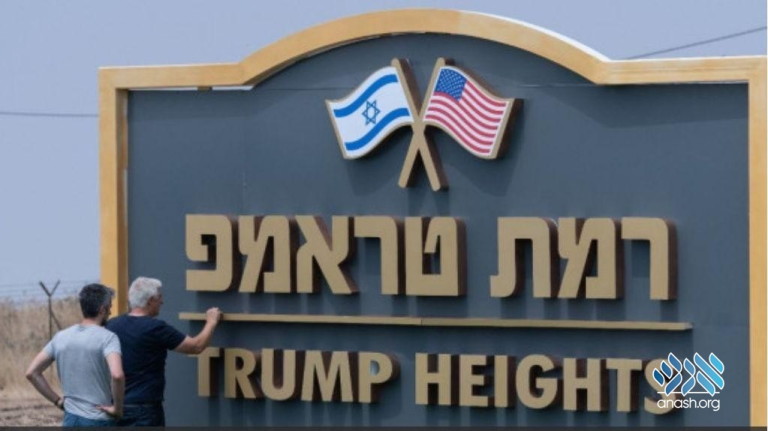 The US mission to Israel took part in a special naming ceremony in the Golan Heights Sunday afternoon, marking the formal naming of a new town in the Golan after President Donald Trump.

A sign at the entrance of the future town was unveiled during the ceremony for the yet-to-be built community of Ramat Trump, or Trump Heights.

The Israeli cabinet met Sunday in the Golan town of Kela Alon, near the site of the new community, to formally approve the establishment of Ramat Trump.

US Ambassador to Israel David Friedman joined Israeli Prime Minister Binyamin Netanyahu and members of his cabinet at the ceremony.

“This is a historic day,” Netanyahu said, sitting next to Friedman. “We are about to approve construction of a new town in the Golan, something that hasn’t happened in quite a long time…and we’ll be honoring a friend of Israel, President Donald Trump, who recently recognized Israeli sovereignty over the Golan, the first foreign leader to do so.”

Following Netanyahu’s comments at the special cabinet meeting in the Golan, Ambassador Friedman thanked the prime minister for the decision to name a new town after the American president, calling it an “extraordinary gesture that you and the State of Israel are making to the President of the United States.”

“It is well-deserved, but much appreciated. We look forward to working with you and with the Government of Israel to continue to strengthen the alliance between the United States and Israel.”