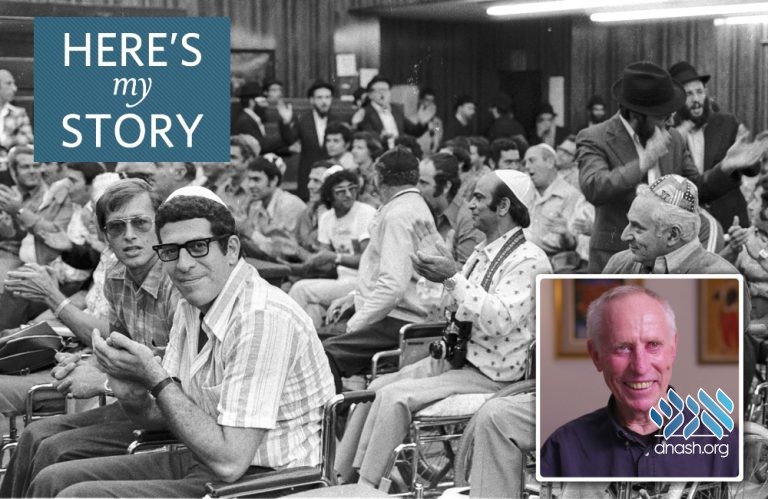 Dr. Aharon Danziger an Israeli orthopedist who was injured in a military operation, tells how the Rebbe’s meeting with wounded soldiers led to the founding of Israel’s “Challenge Association.”

Dr. Aharon Danziger, an orthopedist, serves as a senior physician at the Hadassah Medical Center in Jerusalem. He has participated in various sports competitions at four Paralympic Games, winning
four gold medals, and is one of the founders of Amutat Etgarim. He was interviewed by JEM’s My Encounter Project in March of 2020.

After the Six Day War, there was a great deal of tension along the Israeli-Egyptian border, which reached a crisis point in the middle of 1969 when the Egyptians announced the end of the ceasefire agreement and launched the War of Attrition.

In January of 1970, I participated with my paratrooper unit in Operation Rhodes, one of the famous battles that led to ending this war. We attacked an Egyptian commando base on Shadwan Island, a large coral island at the mouth of the Gulf of Suez, with the goal of taking Egyptian soldiers captive so they could then be exchanged for Israeli POWs. The operation was successful, but during the battle three of our soldiers were killed and seven were wounded, myself included. I was hit while attempting to rescue my wounded companions, and as a result of this injury, my right leg was amputated.

My rehabilitation process included intense physical activity, which led to my participation in various athletic competitions. In 1976, together with a delegation of disabled athletes from Israel, I competed in the Paralympic Games taking place that year in Toronto, where I won a gold medal for the 100-meter sprint and our team won third place out of the forty countries participating.

On the way back to Israel, the delegation stopped in New York where the secretary of the IDF Disabled Veterans Organization, Yosef Lautenberg, had arranged for us to meet the Lubavitcher Rebbe.

As our buses arrived at Chabad Headquarters in Crown Heights, we felt the great excitement of the chasidim who were waiting to greet us. They welcomed us into the big synagogue, and then they were asked to leave while our seating was arranged with a great deal of space in between, but we learned the reason for this only later.

When the Rebbe entered, the hall grew silent as a feeling of awe filled the room. He spoke to us in Hebrew, and although at times we found it hard to understand his Hebrew due to his strong Yiddish accent, our impression was that we were in the presence of a very special man who deeply cared about us.

The Rebbe’s message to us was that we were heroes, and that our injuries proved G-d had given us unique strengths beyond those of a regular person. These strengths — this “special spiritual energy,” as he put it — enabled us “to overcome that which ordinary eyes perceive as a physical, bodily lack.”

“Furthermore,” the Rebbe continued, individuals who are disabled “can demonstrate that they are not only equal to those around them, but have a greater spirit which enables them to rise above and beyond an ordinary person, despite their physical shortcomings.”

He then suggested that we should not be called “handicapped” (nechei) but “exceptional” (metzuyanim).

The Rebbe also spoke about the need to increase security for the Jewish people in the world which begins with what he called “spiritual security.” He said that the mezuzah at the doorway of a Jewish home brings G-d’s protection, and he asked us to make sure that our mezuzot were kosher. “If you will leave me your addresses, my emissaries in Israel will visit your homes and will assist in checking the mezuzot or affixing new ones to the doorposts,” he promised.

(He made good on his promise. A chasid showed up in my dormitory at Ben-Gurion University, where I was studying medicine, and he put a mezuzah on my door there. Since then I have always made sure to have a mezuzah at my home.)

When the Rebbe finished his speech, he came down from the podium and walked between the rows, approaching and greeting each of us, one-by-one. He shook hands, listened patiently to what we had to say, and even gave every one of us a dollar to donate to charity.

The brightness of his smile and the warmth that he radiated turned the experience of meeting him into
something unforgettable. We knew that the Rebbe was a very busy man and that people from all over the globe came to meet him, but he made us feel that he had all the time in the world for us.

When the Rebbe came to me and shook my hand, I told him that I feel I am totally healthy. Although it’s true that I am an amputee, the concept of victory of spirit over matter — which the Rebbe had spoken about — has always been very clear to me. The Rebbe gave me a big smile and a dollar and moved on. I hold this dollar dear and have always treasured it.

As a native of Kibbutz Gal On, I was brought up and educated in an atmosphere that was totally disconnected from religion. So the encounter with the Rebbe – especially his warm and loving approach — was a first of its kind for me. In his speech, he had emphasized the common denominator among Jews, no matter who they are and where they find themselves.

All this made a deep impression on me and started a real transformation in me. It led me to connect to Jewish tradition and religion in a very significant way. And it affected the way that I, as an orthopedist, relate to my patients. I feel that I am passing on to my patients the Rebbe’s
blessing to me and that it assists me in healing them.

When I see that they are having a very hard time with their injury, I tell them that if I, with my disability, was able to arrive where I am and do whatever I wish to do, they certainly can too. This was the Rebbe’s inspirational message — that this ability to go beyond physical limitations is present in all disabled people, and they will find they have amazing strengths if they try to discover what was gifted to them by G-d.

As a result of the Rebbe’s inspiration, I became one of the founders, in 1995, of the Amutat Etgarim (“Challenge Association”), which has since grown into a very large organization, assisting people with all kinds of disabilities to rehabilitate and reach high levels in athletics, including extreme sports.

The Rebbe opened the door for me, and I — along with my teammates — left that meeting feeling very uplifted.

Even today, nearly forty-five years later, the memory of that astounding event remains with me, as do the lessons that I took from it for the rest of my life.