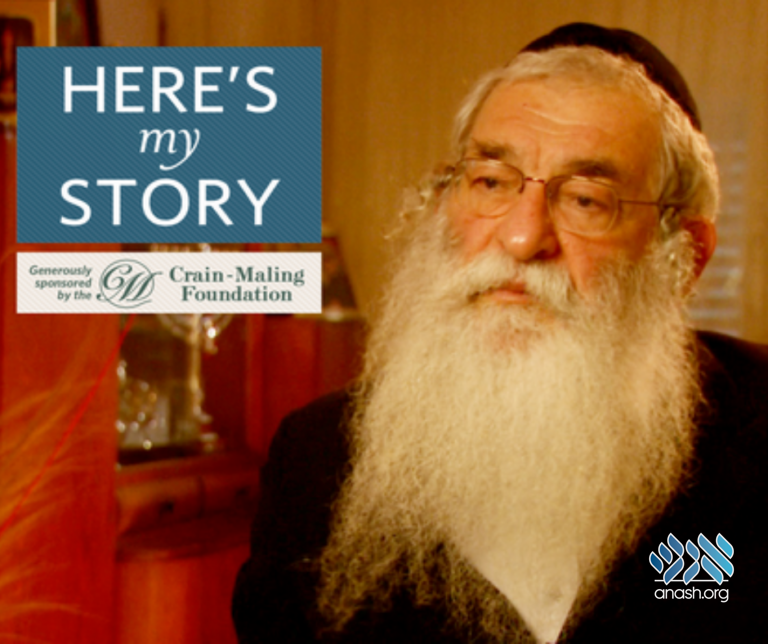 When the Previous Rebbe, Rabbi Yosef Yitzchak Schneersohn, visited the Holy Land in 1929, he concluded his trip in Jerusalem, where he received visitors who wanted a blessing from him. My father, who came from a Hungarian chasidic family but had no links to Lubavitch, decided nonetheless to take this opportunity to meet the Rebbe.

“What do you need?” the Rebbe asked him.

My father was already married with children and he wasn’t lacking money, so half-joking, he told the Rebbe: “That my children should be your chasidim.”

His blessing was indeed fulfilled – today all of my father’s descendants are Chabad chasidim.

I myself studied in Chabad yeshivahs in Jerusalem and, after graduating, worked for a few years as a school counselor at an educational institution for child Holocaust survivors.

Then, a terrible tragedy struck the community of Kfar Chabad. On April 11, 1956, terrorists attacked the village and murdered five students and their teacher while they prayed at Beit Sefer Lemelacha – the trade school catering mostly to the children of new immigrants to Israel. In the aftermath of that terror attack and the painful impression it made on the students, I was asked to come and help the students deal with the trauma they had experienced. I ended up staying on as a school counselor and teacher for many years.

Throughout those years I was in contact – mostly by letter – with the Rebbe who, in 1951, had taken over the leadership of Chabad after the passing of the Previous Rebbe. He constantly showed great interest in every aspect of my work, even inquiring how each particular child was doing. As much as I tried to supply the details, the Rebbe always asked me for more.

As well, he offered me guidance in my work. He predominantly advocated treating the students with kindness. I noticed that this approach achieved the best results. The closer I was to the students, the more interested in how they were doing, the more successful I was at earning their trust, forging a connection with them and influencing them.

The Rebbe also emphasized the importance of joy and its ability to positively impact the students. Until today, students whom I taught forty years ago visit me to report that this approach made a permanent impression, and they have emulated it with their children.

But, at the time, there were teachers at the trade school who disapproved, arguing that more strictness was necessary. When I once brought this up to the Rebbe, he totally disagreed, stating that the only way an educator will succeed in advancing children spiritually is by using kindness, closeness and friendship. “We must always emphasize the positive, to encourage, to empower and to uplift,” he said, “because every good word will eventually produce fruit.”

The Rebbe also emphasized the same approach in our Jewish outreach work.

Concurrently with the start of my position at the trade school, Chabad began an initiative of spreading Judaism in farming communities in Israel. In the beginning, this initiative was quite primitive. A few volunteers – myself included – would get together, hire a taxi and drive to the Negev. The farming communities we visited there were populated by immigrants from Arabian Peninsula and North Africa, who were mostly affiliated with the socialist labor movement. They regarded us with great suspicion at first, and it took a while to earn their trust. We also visited transit camps, which were controlled by the kibbutz movement, and the residents there related to us in a similar manner.

At the time, the Rebbe wrote to us that despite the challenge of going to these places again and again, it is important to put in every effort to keep in touch, and not to take lightly the impact these visits are having. We were “breaking the ice,” which is never easy, but our efforts yielded fruit. Many children of these immigrants enrolled in religious schools and eventually went on to influence their communities.

As time passed, our activities became more organized, mainly through the efforts of Rabbi Pinye Althaus and of Israeli President Zalman Shazar, who came from a Chabad family and who was close with the Rebbe.

One of those activities included a kibbutz program called “An Evening with Chabad” which was run by the Chabad Youth Organization. We would invite members of the kibbutz to gather after dinner in the mess hall where, after a few words of introduction, we would sing Chabad melodies. Afterwards, we held a question-and-answer session. As this program gained popularity, there was a great demand for it, so that delegations went out almost every night.

Eventually this program was expanded to include prisons and army bases, but at a certain point, opposition to it arose in the IDF after a few soldiers became religious and left everything to study in yeshivah.

But the Rebbe had never advocated that they should do that. Indeed, he did not think that someone who becomes religious should abandon what he is doing, but rather should stay in his position or profession – the pilot should remain a pilot, the academic should stay in academia, etc. – because by doing precisely that he could have more of an influence on others.

I had non-Chabad friends who criticized our outreach efforts, saying, “You’re buttering up these non-religious people, telling them chasidic stories about loving every Jew. Instead you should tell it to them how it is. They need to know that they are nothing without Torah.”

On my next visit to the Rebbe, when I entered his study for a private audience, I submitted a written question regarding this matter. When the Rebbe read it, he became very serious and said to me, “The non-religious Jews aren’t coming to you to ask your opinion about what they are doing wrong or what they are lacking. They are coming to you to ask what you, as a chasid, have to offer them? If you come to them with rebuke, you are putting up a wall between you and them. Once that wall is up, there won’t be anyone to talk to anymore!”

This was a principle that characterized the Rebbe’s approach – what he taught all his emissaries – to always speak about the positive when dealing with non-observant Jews; never to emphasize the negative. Speak about what chasidic teachings have to offer them. Tell them: “You have a G-dly soul, you are precious to G-d.” Once people taste the light and see that it’s good, they will come and ask for more.

Rabbi Tzvi Greenwald (1931-2018) was one of the leading activists of the Chabad Youth Organization in Israel and worked as an educator at the Kfar Chabad trade school for forty years. He was interviewed in his home in Kfar Chabad in November of 2010.