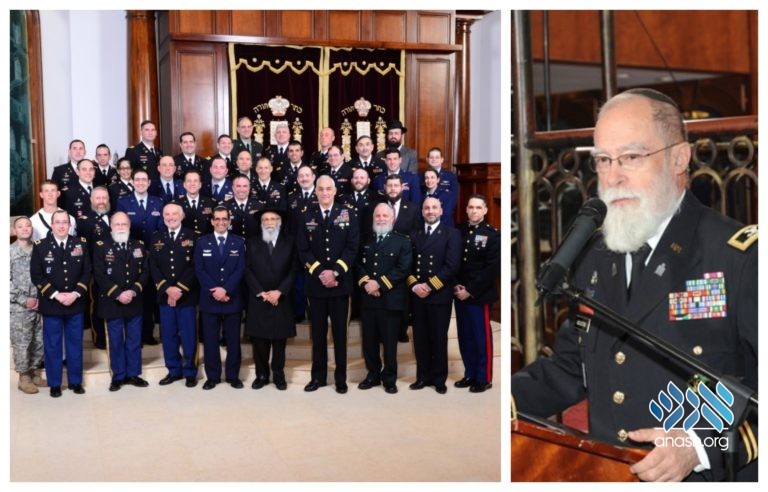 By Rabbi Mordechai Zev Hecht, future chaplain in the US Armed Forces,

Surfside, FL – Shabbos Parshas Mishpatim 2020 was a most unique Shabbos weekend for US( & Jewish NATO) Military Chaplains and Jewish Service Members from around the world.

If this weekend at the Aleph Military Chaplain Training was a fighter jet, it was the F35.

Rabbis, chaplains, Jewish lay leaders and personnel converged on Bal Harbor Florida for a five day meeting of the minds and hearts. Courses and lectures addressing education, resilience and logistics of Jewish needs were a mainstay of the training course.

The weekend, hosted by The Shul of Bal Harbour, was a meticulously planned event which hosted a panel of chaplains, military personnel and experts in their respective fields of the highest ranks.

The team that makes this all happen includes Rabbis Sanford Dresin, Eli Estrin, Mendy Katz, Aaron Lipsker and of course Rabbi Sholom Ber Lipsker who are dedicated and committed, heart and soul, to all Jewish men and women in the entire armed forces. It is clear beyond doubt that Aleph is an organization we, as American Jews, simply could not live without.

‘Modern Maccabees’ is the only way to describe these selfless men and women doing their priceless and holy work.

The highest rank of an enlisted member in the military is Sergeant Major an E9 level rank. Sergeant Major Sam Yudin, a proud Jew if I ever met one, said the following: “you are the story, someone will tell it one day, make it good.” He further stressed the priceless advice to make yourself heard and make yourself needed. “Do good and persevere” – lessons a soldier of any sort can take home with them.

Rabbi Mintz, and Rabbi Heshy Epstein and other JLI staff taught a first class course that would benefit soldiers or airmen in any division of the military.

Did you know, and history will show that the (congressional) Medal of Honor is a medal awarded a military person that the president salutes? “Multiple Jews in Jewish History are among those who have received this honor,” noted Terry Bresnick of US Military Academy, Westpoint and leader of the Jewish Chapel there.

Hundreds of thousands of Jewish Americans have served in the United States Armed Forces and sacrificed their lives over the past two centuries, helping form and make the country that we live in safer and more enjoyable.

“Today, if I were president, these men and women would receive Medals of honor and my loving salute, no doubt”, said a chaplain recruit at the training course.

Rabbi Mendy Katz, Director of Programs at Aleph, a deeply-loved individual by many of the chaplains present, notes that in an early publication of the Statutes of Machne Israel, it is written: ”To assist the spiritual and material well-being of Jews in the armed forces by furnishing them with books, reading material, kosher food etc…” This is Aleph, this is the Rebbe’s vision actualized in a way that we could never have imagined.

To see how Aleph has grown and how the active Jewish chaplaincy in the military has grown is a testament to their commitment and education to the cause. Reflecting on an article from 2004 that states that there were 36 Jewish chaplains in the Military, today there are more than 75 Jewish Chaplains and more than 100 Jewish lay leaders and growing, better equipped more skilled and more connected, all due to Aleph’s monumental work.

Ultimately, what made this conference so profound, beautiful and meaningful were the Chaplains, be it from Kansas, Germany, France or Lakewood, NJ.  Active duty or reserve who are stationed all over the world serving our holy brothers and sisters of the armed forces. The sense of camaraderie and love and respect and their own personal demeanor towards each other and the hundreds that visited over the weekend to meet the chaplains is a true testament to  their self-sacrifice and love and passion for what they do which was clear and ever present over the entire 5 days.

To support Aleph’s work, visit www.Aleph.Auction to purchase raffle tickets. The drawing is this Monday at The Shul.