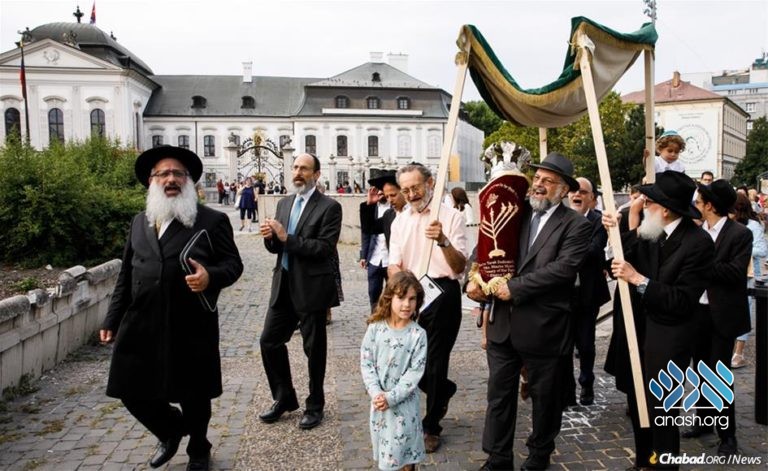 A new Sefer Torah is in place in Slovakia, the first to be inaugurated in the Central European country since the Nazis ravaged its Jewish population during World War II, while one proud Jewish boy will live to tell the tale of having celebrated his bar mitzvah amid the fanfare of a city-wide celebration.

As part of the joyous dual event, the boy of honor, Tzali Myers, helped lead the customary Torah-scroll procession through the capital city of Bratislava, past the Presidential Palace and busy urban surroundings, to a well-appointed new Chabad center that his parents established in late 2017.

“Wow. Incredible. This is one of the most touching moments of my entire life,” said Dr. Tomas Stern, president of the Bratislava Jewish community, upon filling in one of the final letters of the scroll.

This, while another participant, Edita K., waxed even more emotional: “I remember my mother telling me how Holocaust survivors quietly brought a Torah back into the shul [synagogue] after the war ended. They hugged it and cried, and walked with it from the courtyard into the shul. But a singing procession like this, they could never have imagined it would be possible.”

Circle dancing with the Torah ensued at the Chabad center, formally known as the Chabad Educational Center of Slovakia, co-directed by Tzali’s parents, Rabbi Baruch and Chanie Myers, who have served as Chabad-Lubavitch emissaries in the Slovak capital since 1993.

The crowd then returned to the hotel where the Torah had been finalized under the direction of scribe Rabbi Shimon Shimonov of neighboring Austria. The celebration was rounded out with a sumptuous dinner, speeches, the recitation of a customary discourse by the bar mitzvah boy—the 11th of the couple’s 13 children—and then more dancing and singing that lasted long into the night.

A Special Sense of Pride

The new scroll will be housed in the multi-floor Chabad center, which was dedicated in December 2017 in the presence of top government officials. A synagogue inside the center—incorporating a new ark, ark-cover and Torah-reading platform covering, all donated, along with the new Torah, by community members—will serve as an alternative place of worship to the only surviving synagogue in Bratislava, for which Myers also serves as rabbi. The main city synagogue is not always open and not always able to cater to the impromptu prayer-service needs of visitors.

The current size of the Jewish community of Slovakia, with an estimated 2,600 Jews, according to 2010 census figures, pales in comparison to historic times such as the early 19th century, when the likes of Rabbi Moshe Schreiber (Sofer)—known as the Chasam Sofer—graced Bratislava (at the time called Pressburg), and when the Jewish landscape was dotted with dozens of synagogues and places of learning.

Overall census figures remain inexact, partly because many Jews did not identify themselves. One estimate reports that approximately 105,000 Slovak Jews, or 77 percent of the pre-war population of an estimated 136,000 Jews, perished during the war.

All the more reason for the ecstatic atmosphere felt at the recent simchah, noted Chanie Myers.

“The writing [of the scroll] was followed by a joyous, police-escorted procession through the center of Bratislava, passing in front of the Presidential Palace, gaining the attention of passers-by and the media, and generating a special sense of pride and belonging among the local Jewish community,” she said. “It was truly an emotional, very meaningful event.”