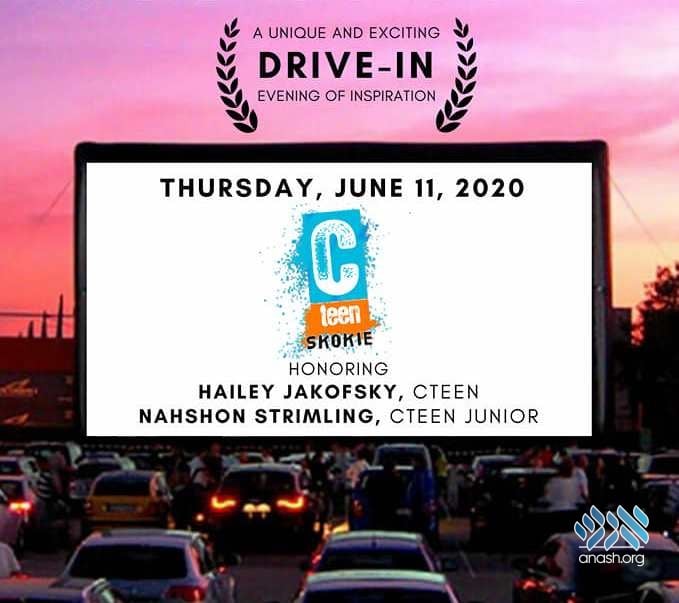 Lubavitch Chabad of Skokie will honor young leaders in a unique outdoor celebration, complete with a giant screen and kosher concessions.

Eighteen-year-old Hailey Jakofsky says that attending a drive-in theater has always been on her “bucket list.” The problem is that the outdoor theater near her home in Skokie, Ill., had closed in the 1970s, along with most of America’s drive-in theaters, which once numbered as many as 4,000.

Now, she will not only have her wish, but she’ll get to see her face and those of her friends on the giant screen.

For the past four years, every June, members of the Jewish community in Skokie, Ill., gather to honor teen leaders of their local CTeen chapter. The gala event typically includes an elegant sit-down dinner and entertainment for more than 100 attendees, including teens, family members, supporters and other well-wishers.

“It’s a fun way to bring closure,” says Jakofsky, who has been involved in CTeen since seventh grade and joined its leadership board in ninth grade. “You look back at the highlights of what you and your friends experienced together during the course of the year.”

But the last few months, nothing for Jakofsky, who recently graduated Ida Crown Hebrew Academy and is enrolled to attend Oakton Community College in the fall, has gone according to plan. She missed most of the final semester of high school and has had no graduation exercises as of yet.

To make sure the gala would be celebrated, CTeen directors Rabbi Yochanan and Yona Posner, along with the teens leaders, knew they would need to rethink the concept.

The result: a drive-in gala celebration, with each family enjoying refreshments in their cars, all while watching the proceedings on a 40-foot drive-in theater screen as the sun sets on Thursday, June 11.

Since there is no local drive-in, the Posners rented a giant screen, which will be placed in a parking lot large enough to accommodate 100 cars with empty spaces between each one to ensure social distancing. And in true theater tradition, the sound will be broadcast over FM radio.

As usual, the gala will include specially prepared video presentations, which were shot with social-distance measures in place at Lubavitch Chabad of Skokie, which has been closed for services since March.

And like every drive-in theater worth its blacktop, a package of kosher concessions will be presented to every car that enters the lot, ensuring plenty of goodies to be enjoyed during the show.

Along with Jakofsky, the evening will honor Nahshon Strimling, representing CTeen Junior.

Those who plan on participating represent a wide array of area Jewish and public schools, as well as homeschoolers. Together with Dr. Anne Zavell, Rabbi Yochanan Posner cosponsors the Jewish Association of Students Club, dubbed “Jew Crew,” at Niles North Public High School. This event will include celebration of the club’s achievements this year at Niles North, and many District 219 students are expected to attend.

“It’s gonna be awesome,” says Jakofsky, who has attended every gala since entering high school. “But this time, instead of sitting around tables and posing for pictures together on stage, we’re going to be sitting in minivans waving to our friends through the windows.”

Reprinted with permission from www.chabad.org