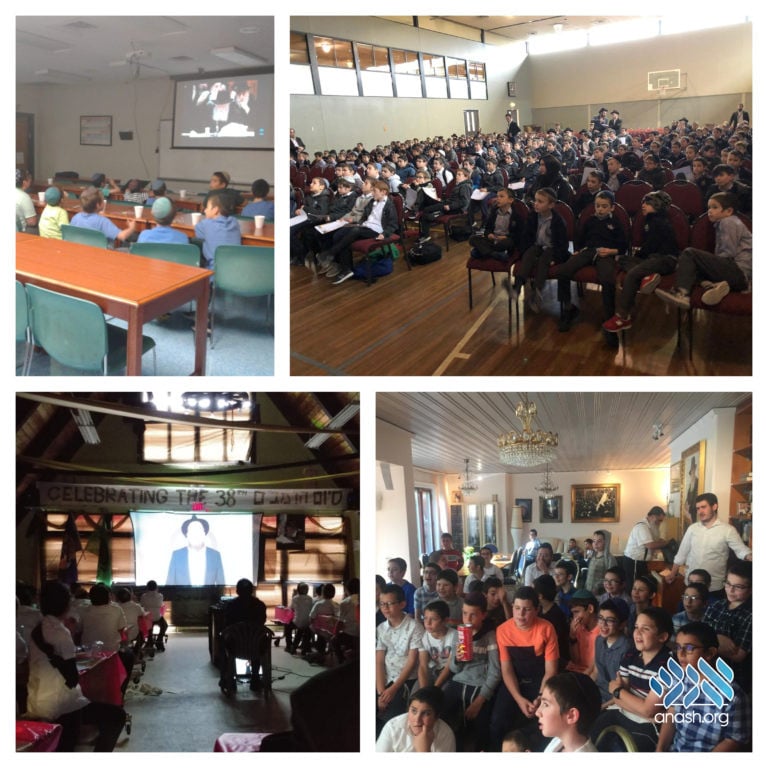 As we reported earlier this week, thousands of boys and girls, men and women and even young children gathered from all across North America and Australia to unite for an unprecedented global Siyum Harambam produced by CGI Siyum Harambam in conjunction with Vaad Or Vechom and Chitas for Kids.

In addition to a simultaneous live broadcast with participation from camps Gan Yisroel Montreal, Detroit, Toronto, Florida, Camp Emunah and four schools in Australia, over 1,500 families from all 50 states and 30 countries joined the special kid-friendly program from their supper tables.

Hosted by Benny Friedman and Rabbi Raleigh Resnick, the program consisted of two specially commissioned Itche Kadoozy segments, the 12 Pesukim led by campers and students in the participating camps and schools, a video of the Rebbe with JEM’s new Connection Point Home program, and a special rendition of the song written in honor of this year’s Siyum Harambam by Rabbi Zalman Minkowitz.

The new Sefer Hamitzvos is currently sold out, but those who want to receive updates about future printings can sign up here.

The focus of the event was on the special achdus that is accomplished through learning Rambam; the achdus with all 613 Mitzvos, with each other, and of course, the special connection with the Rebbe who desired that each Jew learn Rambam or Sefer Hamitzvos each day. Each participant was encouraged to not only commit to learning themselves, but to reach out to friends and inspire them to learn Rambam or Sefer Hamitzvos as well.

“Today is the day that you will be able to look back at and say I learned Rambam every day from this day onward, I connected to the Rebbe and every Yid, every single day,” said Rabbi Raleigh Resnick, host of the event.

And it worked! In response to the question form that was given to the children to answer as part of the special Connection Point Home program produced especially for this event by JEM in conjunction with Tzivos Hashem, over 300 children said that what they learned from the Rebbe today was to focus more on making sure to learn Rambam each day.

To view a replay of the event click here.

To donate to the costs of the event and to enable future projects, email cgisiyumharambam@gmail.com.