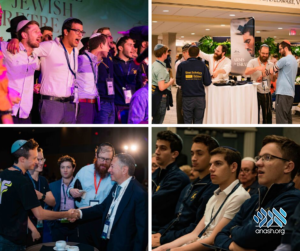 A lucky group of 143 Jewish college students received a dream opportunity this past August to participate in the 2019 National Jewish Retreat, held in the nation’s capital, at the five-star Marriot Wardman Park Hotel.

Sinai Scholars (a joint project for Chabad on Campus and the Rohr Jewish Learning Institute) is a society that empowers students – most with minimal prior Jewish knowledge or experience – with authentic Jewish scholarship, facilitates networking with Jewish students nationwide, and instills leadership abilities that change lives, campuses, and communities.

Other features included a human color palette inspired interactive mitzvah fair, an immensely popular networking lunch, a sightseeing trip to a choice of three DC museums, a vivacious game show, and a taste-of-yeshivah event led by the faculty of several international institutions of higher studies. Late-night unwind time programs kept students engaged into the early morning with the likes of hands-on Judaic crafts and dating-secret classes, with plenty of good food on the side.

Shabbos at the Retreat is in a league of its own, filled with authentic Jewish inspiration, candid discussion, song and spirit. Students had the option of slipping their cell phones into customized “sleeping bags” to hibernate for the duration of Shabbat. For some participants, this was their first traditional Shabbos – and a number of students resolved to adopt the tradition.

Judging by students’ post-scripted testimonials, the event was remarkable and its impact extraordinarily effective in boosting Jewish identity, pride, and scholarship.