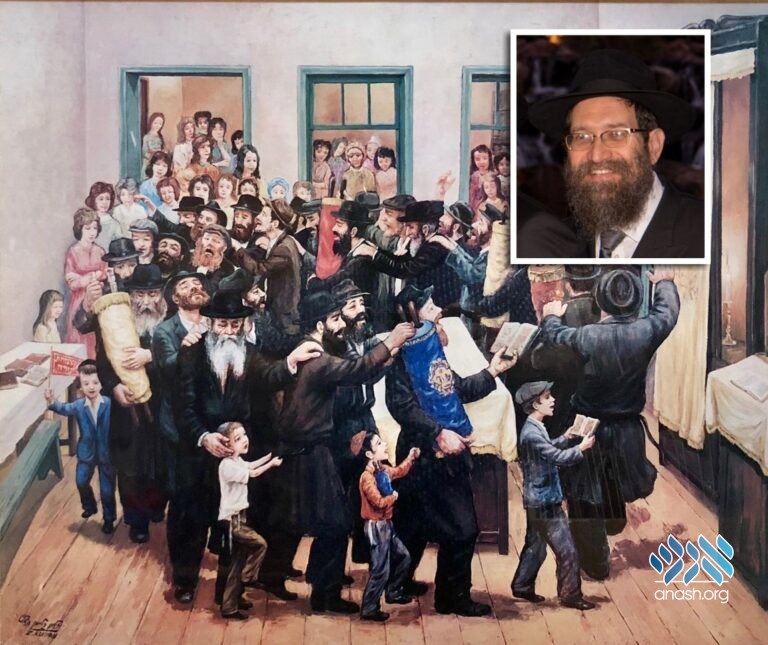 From the Anash.org Inbox: California Shliach Rabbi Shimon Posner reflects on a lesson he learned one Simchas Torah about making Yiddishkeit relatable, and why Simchas Torah begins long before Rosh Hashana.

Tahalucha was never considered a highlight of Tishrei with the Rebbe: you actually had to leave Crown Heights, and you knew that you were missing a special Farbrengen – even if you normally didn’t understand when the Rebbe spoke. You were to go to shuls within a two-hour walk to share Simchas Torah with them, to “show ‘em how it’s done”.

Two tahalulchas stick out in my mind.

In one, the rabbi was an elderly Holocaust survivor, kapote/bekeshe, long, full beard, wearing a talis. He cradled a small Torah in his arms – we were told that he had saved it through the War and brought it to America. He cradled that Torah and he danced with an intensity and a yearning and an abandon that was a sight to behold — and to treasure.

A young man, concerned for the rabbi’s health, tried to stop him. Without sounding overly cruel, this rotund fellow with rotund cheeks made me think of a squawking hen. The rabbi basically told him to get lost. After Hakafos all of us approached the rabbi to wish him Gut Yom Tov and how I wished I could somehow carry him with us to the Rebbe’s Hakafos.

Second Tahalucha memory: We were not exactly the most presentable bunch, us Lubavitchers, during the month of Tishrei. For those few who did own two suits, you could only wear one for 770, and every second day it was bound to get creased and sweaty. So when we showed up in a respectable shul somewhere in south Brooklyn we were as embarrassing as poor cousins showing up to a simcha. Few met our eyes, fewer yet greeted us. I couldn’t blame them.

For those who were spared the Seventies, there was this horror called leisure suits: they were to apparel what Soviet buildings were to architecture: hideous, polyesters with a stitching that purposely stuck out.

Three such-attired young men surrounded the chazzan as they honored the congregants with Atah Horaisa. Whenever the talking would get too loud or too distracted the leisure suits would bellow a (how do I write this?) “Badda-ba-ba-ba-ba-Pooow!!”

To keep the children engaged, others masqueraded as Superman, Spiderman, Batman etc. Mothers were bringing their young forward to shake hands with Spiderman, high-five him, touch him. “Badda-ba-ba-ba-ba-Pooow!!!”

“Ki mitziion tzeitzi Torah….” so progressed the hakafos. And then, toward the end, they called upon their “friends from Lubavitch” for a Hakafah. And one of us started the Hakafa Niggun.

The Hakafa Niggun is not a “joyous tune”, it begins somewhere deep, soulful, stirring, comforting as it is challenging, and builds to a crescendo. The tune caught with the other tahalucha’niks as we began circling the bima. No one had to get the attention of a distracted crowd. Spiderman and his friends stood and watched. Something otherly was now in the room, — and at play.

I cannot honestly say what was my projection upon the hakofah and what was actually changed. But this was some forty years ago and if nothing else, I have in my life what to compare and contrast it with, and in my mind this was a moment that momentarily transfixed and transformed.

It’s hard not to think of this Tahalucha as Tishrei comes upon us. I know closer to Simchas Torah the thought surfaces of how to make ST “relevant” and how to keep people from getting distracted.

I once read an article about the efficacy of advertising. It described a television ad, and the detailed description rendered is not worthy of our discussion. The pertinent part is that the ad was entirely in a foreign language, showed lots of passion but no context, and was a touch unsettling. It was a wildly successful ad, and the reviewer described that the audience “didn’t know what was happening but they knew that something was happening”.

It is good to make Hakafos comfortable for all: have punch for those that don’t drink, finger foods, a list of songs that people know.

But if my own Shabbos Mevorchim Elul is a Shabbos Mevorchim Elul and my Chodesh Elul is a Chodesh Elul, if my Chai Elul is a Chai Elul, if my Rosh Hashanah is a Rosh Hashanah, my Erev Yom Kippur is an Erev Yom Kippur, my Yom Kippur a Yom Kippur, My G-tt’s Nummen a G-tt’s Nummen, Sukkos a Sukkos, Hoshana Rabba a Hoshana Rabba, will I need to focus on the relatability so much? Will not they sense a something even if they do not know what it is? Will not the genuine touch the genuine?

Simchas Torah is not an event; it is a process. A culmination (of sorts) of a process: what is evoked by shofar and fasting is evoked on Simchas Torah in dance. Unmitigated dance. Dancing with a tear unfallen for the yearning of where we want to be, with a self-exasperation at our own propensity to distraction and focus on bada-ba-ba-ba-ba, by our own attempts at not allowing our passion within — the passion that carried our people through the War! — not allowing that passion to burst forth because inside of us — along with this passion — is a Mama Hen clucking pathetically. With this irreducible ambivalence we dance on Simchas Torah.