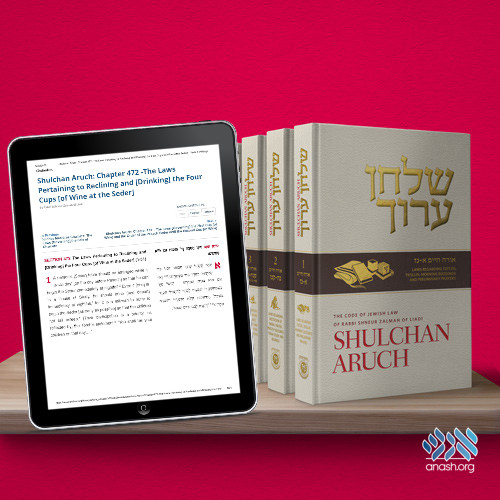 Sichos in English has released the second volume of its groundbreaking translation of Shulchan Aruch Hilchos Pesach to bochurim worldwide through Igud Yeshivos.

Usually at this time of year just a few weeks before Pesach, Bochurim in yeshivos worldwide would be spending a significant portion of their day diligently studying the Halachos of Pesach.

However, as thousands of bochurim remain at home, and are forced to continue their learning individually, the challenge of learning alone and without the help of maggidei shiurim is being felt by many bochurim.

In response to these difficulties, Sichos in English has made available the second volume of its groundbreaking translation of Shulchan Aruch Hilchos Pesach, to bochurim worldwide through Igud Yeshivos.

The new volume which contains Hilchos Pesach chapters 452-494 and includes the halachos of the seder night, has not yet been released to the general public.

In a conversation with Anash.org, Rabbi Mendel Itzinger director of Igud Yeshivos said “in addition to the daily shiurim we are offering, each day the Bochurim will be learning a portion of the Alter Rebbe’s Shulchan Aruch Hilchos Pesach, with the relevant chapters uploaded each day to our website.”

The Shiurim, which can be accessed by phone and online, provide a Bochur with the anchor of daily Seder in Gemora and Chassidus, and also in concepts for which the logistics of regular Yeshiva Seder doesn’t permit.

Rabbi Mendel Itzinger thanked Rabbi Shmuli Avtzon director of SIE, and the Weiss family for their generosity in making this available to the Bochurim.

All the Shiurim will be carried live on the Hotline: 1-292-281-6000, and for Marei Mekoms and Shiur viewing on www.igudyeshivos.com/yeshiva