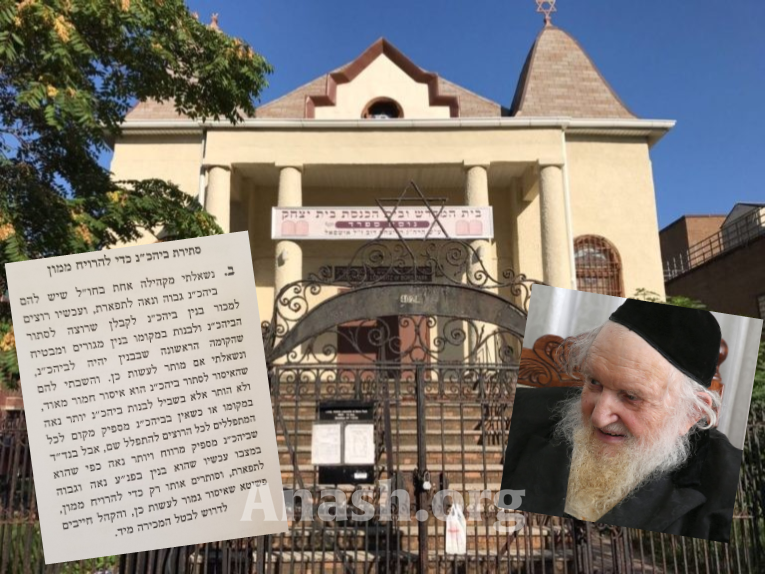 Rav Moshe Sternbuch, the second in head (Raavad) of the Badatz Eidah HaCharedis in Yerushalyim, has weighed in on the dispute over the demolition of Anshei Lubawitz of Boro Park.

The shul, situated on 12th Avenue and the corner of 41st Street, is the oldest shul in Boro Park, and has been the subject of dispute between a real estate developer and members of the congregation. In the latest volume of his Teshuvos v’Hanhagos, Rav Sternbuch released a halachic responsa forbidding the sale.

The conflict centers around the vehement opposition from many of the shul’s regular mispalelim and concerned Lubavitcher chassidim to selling the shul and allowing a developer to gut the historic building and replace it with five floors of high-end condominiums. The developer is willing to build a bigger and more updated shul for Anshei Lubawitz on the building’s ground floor, but the sentimental value of the existing structure will be lost.

Rav Sternbuch, who began his connection to Lubavitch when he studied Tanya as a bochur in London with Reb Bentche Shemtov, enumerates the reasons why the shul may not be razed in his Kislev 5778 (December 2017) letter.

“I was asked if this is permitted according to halacha. My answer to them was that the issur of destroying a shul is indeed a very grave one. It is only allowed when a more beautiful one is built in its place, or if the current shul overflows with mispalelim and the shul to be built in its place will have more room for those wishing to daven there.

“But in this case, where the shul has more than enough room for those coming to daven there, as well as the original shul is more beautiful than the room that would replace it, and the sole reason for destroying the original building is for reasons of profit–obviously, it would be prohibited to do so. The kehillah is obligated to insist that the sale be terminated immediately.”

Dovid Shor, a mispalel at Anshei Lubawitz who is actively involved in the battle to save the shul, told Anash.org that he’s very pleased with the teshuvah being published. “Torah law is what guides us and we are happy that the psak was now published, thereby bringing the issue back into focus.”

In an effort to halt the destruction, activists have applied for historical landmark status for the building. “The application is actively being reviewed, and we expect an answer from the committee in a short time,” Shor says.