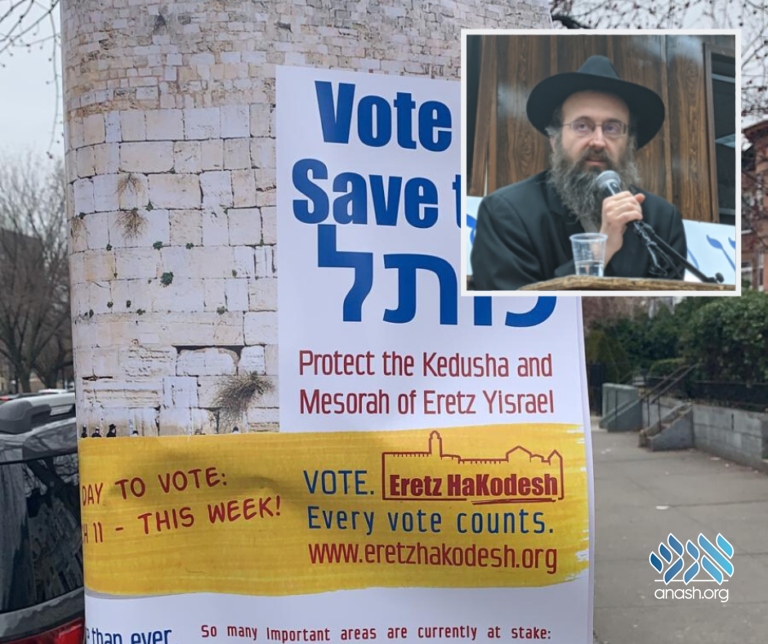 In recent weeks, there has been much talk about whether one should participate in the upcoming elections for the World Zionist Congress. Harav Yosef Braun of the Crown Heights Beis Din weighs in.

In recent weeks, there has been much talk about whether one should participate in the upcoming elections for the World Zionist Congress. Harav Yosef Braun of the Crown Heights Beis Din weighs in.

Is it allowed to vote in the following to help make the land of Israel frumer? They ask for affirmation on Zionism, that is NOT the Rebbe’s shita.

There are several issues at play here and we will attempt to analyze them one by one.

Endorsement of a secular organization:

Though voting is somewhat of an endorsement of the organization at large, it appears to me that this is the same as voting for Knesset, which has been encouraged by virtually all gedolei Yisroel. I have subsequently heard the same opinion from another contemporary Posek who shared with me his position as above.

This is very different to joining the Synagogue council of America, something which was banned by gedolei Yisroel, as it indicates a recognition of movements who deny the creeds of our faith, among them the authenticity of Torah. The key distinction is that this organization is purely a secular organization and contains no religious significance whatsoever.

The particulars of the platform:

Obviously, one would have to carefully check the platform of the organization as well as of the particular slate they are voting for to ensure that is it is totally compatible with Torah values.

It appears to me at first glance that the platform of the organization at large is totally inconsistent with Torah and certainly with the position of our Rebbeim. There are strong implications of endorsement of the Zionist ideal, lending significantes to conversing in the Hebrew language, but most importantly a recognition of other strands of so-called Judaism.

It would be very hard to argue that when signing up to become a member one intends a different meaning in the terms used in the platform. This would be tantamount to falsehood or at least deception. Regardless, one ought to go at great lengths not to engage in any action which even has a remote implication of ideals which are contrary to Torah.

Choosing to become a member:

Additionally, there is one marked distinction between elections for the kneset and this case: once one carries a teudat zehut, they must vote according to halacha. However, in this case, one is signing up to become a member of a secular Zionist organization (in addition to the philosophies which are anathema to Torah). One cannot compare voting for a government in the state where one lives to actively signing up to become a member of a secular political organization. It is very hard to say about this matter that there’s an obligation to do so. In fact, it would be wrong to actively pursue becoming a member of such an organization. The Rebbe was adamant about not joining even Torah political parties.

(Rabbi Schwei shlita relates there in a phone conversation, Rabbi Hodakov OBM instructed him that it is absolutely unacceptable to sign up and become members of a particular religious political party even if this would assist in bringing people close to Chassidus. The words he used were: even if you know that this would bring about Moshiach’s coming).

Certainly, one may not sign on to the platform of an organization which is based on Zionistic ideolgy. (On the other hand, the fact that when signing up to become a member one is channeling money to this organization wouldn’t be an issue, as the money us solely to pay for election expenses.)

In this case, one should follow the principle of shev v’al tasseh adif, i.e. when in doubt it is better to err on the side of caution and choose inaction over action. In this context, what is appropriate to use the vort that my grandfather, the author of She’arim Metzuyanim B’halacha, used to say about shev v’al tasseh adif. This can be translated in Yiddish as follows: zitz un mach nisht besser – at times it’s better to sit back and not try to make things better.