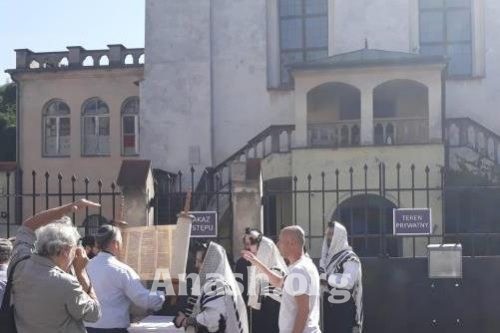 Jews along with the local Chabad Shaliach, Rabbi Eliezer Gurary, were expelled from a shul in Krakow, as several local thugs assisted nefarious individuals in taking over the area’s only chareidi shul.

Security guards barred worshipers affiliated with Chabad Shaliach from entering the Shul amid a property dispute between the Chabad Shaliach and the city’s separate Orthodox Jewish community.

According to published reports, the Jewish community positioned local non-Jewish thugs at the entrance to the shul to watch the site and prevent Chareidim and those affiliated with the Chabad Shliach from entering the Shul.

According to some residents, it reminded them of some dark days in Jewish history.

According to a report by BeChadrei Chareidim, the shul is the only religious one in the area and the local kehilla that controls considerable property in Krakow did not agree to leave the shul to Rav Gurary – who is the area rav and Chabad shaliach – since he did not agree to permit using the site for business, but insisting it remain a shul and beis medrash.

Members of the Jewish community on Monday morning hired a number of Polish thugs to make sure no one entered the shul. They changed the locks and eventually, surrounded the building to make sure it was under control.

Ovadia Tschafsky, a businessman and Krakow resident, is quoted telling BeChadrei about the drama taking place. “I daven in the shul regularly, and this morning, I was surprised to find it was closed. Last Shabbos, they cut off our electric to force us to leave the place, the only chareidi Shul here”.

Ovadia added “the contract to use the shul ended a year ago, and there is an ongoing case in a court regarding how much the rav has to pay to use the building, but they simply threw us out and brought thugs to guard the place so we do not enter. They are demanding 50,000zloti (NIS 47,799) a month while others are paying half that sum and they are only asking other synagogues to pay NIS 2000 zloty. This is simply because we refuse to convert the shul to a debauchery”.

Rav Gurary released the following message: “We did not wish to have this story publicized but certainly it will be read from another source. We had a rent contract with the Jewish kehilla for ten years, for Beit Knesset Isaac in Krakow, and the contract states that after ten years, if there are no violations of the contract, it automatically renews for another ten years.

“The kehilla has decided that it now wants a very high rent, of 25,000 zloty a month, and we of course refused. The attorney who we have hired told us that we do not have to pay the sum because it is an illegal request. This morning, the kehilla hired thugs and locked the doors of the shul”.