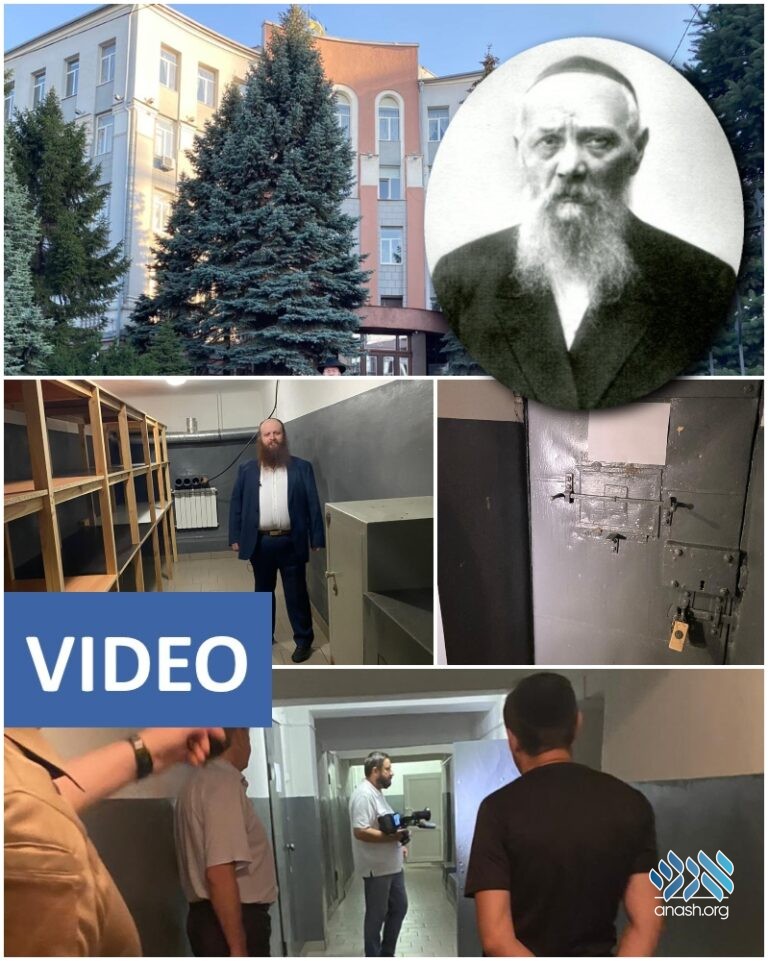 Ahead of Chof Av, a group of Dnieper shluchim visited the detention cell where Harav Levi Yitzchak was led on the night of his arrest, on 18 Nissan 5699, 81 years ago.

In preparation for the special documentary that will be aired by the global Chof Av farbrengen at chofav.com, a group of shluchim visited the detention cell where Harav Levi Yitzchak Schneerson, father of the Rebbe was led on the night of his arrest, on 18 Nissan 5699, 81 years ago.

The shluchim were granted permission to visit through the efforts of Head Shliach and Chief Rabbi to Dnipropetrovsk, Rabbi Shmuel Kaminetsky. Rabbi Kaminetsky utilized his government connections and ended up receiving a special permit from the commander of the security services in Kiev, an ordeal that took over two weeks to receive from Kiev.

The shluchim brought a camera crew with them to film the cell. The footage will be used in the upcoming broadcast. Accompanying the crew was Dnieper shliach Rabbi Moshe Weber, who runs the Kollel Torah network throughout the Former Soviet Union and Europe, and Rabbi Yitzchak Krashenbaum, head of Kollel Torah in Dnieper and maggid shiur in the city’s educational institutions.

The cell where Harav Levi Yitzchak has remained the same as it was eighty years ago, at the time of the arrest. The commander of the detention center told the shluchim that in each cell, only 8 square meters in size, there were up to twenty people. The prisoners took turns sleeping in small bunks in the room.

“Just to illustrate the fear experienced by the prisoners, the commanders jokingly asked to turn off the light and close the heavy iron door when we were inside,” Rabbi Weber told Anash.org. “The darkness in the cell, and the sudden disconnection from the outside world, was frightening. And we were only there for two minutes.”