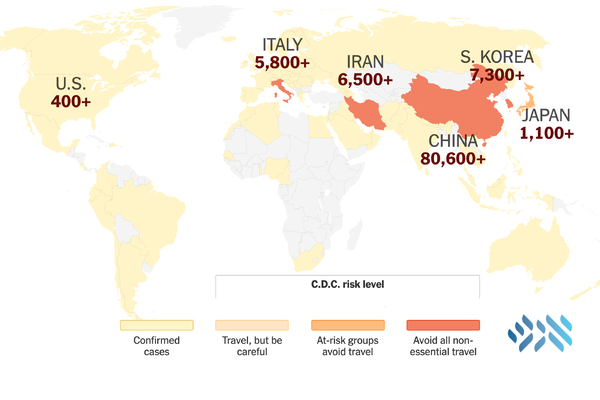 Chabad Houses in areas affected by coronavirus are preparing for Purim cautiously, ensuring that everyone has the opportunity to perform the four mitzvos of Purim in a safe manner.

Coronavirus has now affected more than 100 countries and territories around the world, with cases being reported from as remote as Guadeloupe, a French territory in the Eastern Caribbean, to South Africa, which reported its first case on Thursday. Nations around the world are intensifying efforts to contain the epidemic, as the number of new cases and deaths continues to rise.

As the festive holiday of Purim approaches, beginning the evening of Monday, March 9, and continuing through Tuesday, March 10 (March 11 in Jerusalem), Chabad-Lubavitch centers in affected regions are preparing cautiously, ensuring that everyone has the opportunity to perform the four mitzvot of Purim in a safe manner.

In the United States, the virus has spread to 33 states, infecting more than 400, with 19 deaths—16 in Washington State, two in Florida and one in California. In New York, 105 cases have been reported, with 10 reported to be in hospital.

More than 100 cases have been confirmed in Washington state, with a state of emergency being declared in an effort to halt the spread of the virus. In Kirkland, a suburb east of Seattle, where some of the first cases of community spread were observed, the virus spread to an aged-care facility, resulting in 13 deaths.

“At this time, gatherings of more than 10 people are prohibited; we’ve had to modify our Purim celebration,” Rabbi Chaim Shaul Rivkin, co-director of Chabad of Kirkland, with his wife, Sarah, tells Chabad.org. A downscaled Megillah reading will take place and Rivkin will read the Megillah privately for anyone concerned to leave their homes. “We’re hoping to bring the joy and mitzvot of Purim to as many people as possible while following the instructions of the health department,” the rabbi says, noting that he’s in contact with members of his community who have been quarantined, supporting them in this challenging time.

‘Spirits Are High, as Always’

This principle is being observed in Chabad centers around the world. Japan has more than 500 confirmed active cases and six deaths—with experts warning there could be many more undiagnosed cases, due to inadequate testing availability. Japan’s Health Ministry is ramping up testing, with plans to expand the target range to also include those only showing mild symptoms. The ministry estimates that Japan may have around 3,000 coronavirus cases in total.

In Tokyo, Rabbi Mendi Sudakevitch, co-director of Chabad-Lubavitch of Japan with his wife, Chana, says they will be hosting a small Purim celebration for the few Jews still in Tokyo, with strict hygiene measures in place. “We’ll be checking body temperatures at the door,” says the rabbi. “I don’t know whether we’ll get a minyan.”

Two members of Sudakevitch’s community are in self-quarantine, after arriving from Hong Kong and South Korea, as Japan extended quarantine regulations on Wednesday. “We will be visiting them in their homes and reading the Megillah from another room to ensure they can fulfill the mitzvah,” says Sudakevitch. The Sudakevitches will be joined by Rabbi Shalom Vaisfische and his wife, Rachel, co-directors of Chabad of Takayama, a city in Japan’s mountainous Gifu region, who will be assisting with visits over the busy holiday, as their entire community has left.

Across the Korea Strait in neighboring South Korea, cases have reached more than 7,000, with 50 deaths. As numbers of infected residents snowball—518 additional cases were reported on Friday alone—authorities are going to drastic lengths to keep the epidemic at bay with the government sending alerts to citizen’s phones chronicling the travel history of patients who tested positive, telling residents where an infected person has been and when.

From Seoul, Rabbi Osher Litzman, co-director of the Chabad Jewish Community of Korea with his wife, Mussy, says “spirits are high, as always,” noting that most community members have left Korea as the virus spread. “We’re still hosting a Purim party,” he says, “though many people have requested we visit them at home to read the Megillah.” The rabbi stresses that they’re being vigilant with frequent handwashing and purifying the air constantly—“spiritually as well,” he adds.

In Rome, separation guildelines will be closely followed for Megillah readings.

Italy, at the forefront of Europe’s outbreak, has shuttered all schools last week, until at least mid-March. As the nation registered a steep rise in cases on Saturday, with numbers of confirmed cases rising more than 1,200, to 5,883, new dramatic containment measures were put in place. As many as 16 million people are now under lockdown in northern Italy, with gyms, pools, ski resorts and museums closed. Weddings and funerals have also been suspended under the mandatory quarantine. The new measures, which affect Milan and Venice, will be in place until April 3.

In Rome, all events have been canceled, including Purim celebrations. “Shul is still allowed to be open, provided that there is no hand-shaking or close contact,” reports Rabbi Menachem Lazar from Chabad of Piazza Bologna, near Rome’s city center. “But we will host multiple Megillah readings with reservation required to reduce overcrowding,” he says. Lazar will host a small festive Purim meal for students, as they have nowhere else to go. On a positive note, he says, “We just celebrated a bris. Life continues.”

Over in Milan, while Purim parties and masquerades have been canceled, Purim will still be celebrated joyously. “The Chabad synagogues will be open,” Rabbi Levi Hazan, youth director of Chabad-Lubavitch of Milan says, “though a three-foot distance will be kept between attendees, and Megillah readings will be held in smaller groups.” The rabbi says Chabad is receiving many requests for private Megillah readings.

In Israel, far-reaching restrictions have been put in place with 25 cases of infection as of Saturday night. All Israelis returning from France, Germany, Spain, Austria, Switzerland, Holland, San Marino and Andorra were instructed to enter self-quarantine for a period of 14 days after their last day in those countries, Prime Minister Benjamin Netanyahu announced, adding to the previous restrictions on those arriving from China, Hong Kong, Macau, Thailand, Singapore, South Korea, Japan and Italy. Up to an estimated 100,000 will be quarantined in the coming days, with around 80,000 already in self-quarantine.

At Tzeirei Agudat Chabad (Chabad Youth Organization), the umbrella organization for Chabad outreach activity in Israel, a hotline is being set up enabling people confined to their homes to call and request a volunteer to read the Megillah for them. To prevent transmission of the disease, volunteers will read the Megillah from outside the home, with the listener hearing through a door or window. In multi-level apartment buildings, volunteers have been instructed to read from the stairwell while maintaining a two-meter (approximately 6.5 feet) distance from the quarantined individual.

“ … While following health guidelines, every effort must be made to ensure that the joy and mitzvot of Purim reach every Jew … ,” wrote Rabbi Yosef Aharonov, chairman of Tzeirei Agudat Chabad, in a message to Chabad emissaries and activists in Israel.

Likewise, in Westchester County, N.Y.—the epicenter of New York’s outbreak, which has 82 cases of the virus—Chabad-Lubavitch of Westchester County has offered to send a Megillah reader to the home of those quarantined. “Chabad would like to offer assistance in celebrating the Purim holiday to anyone who may need it,” wrote Rochel Butman, director of Chabad-Lubavitch of Westchester County, in an email to community members. “If you or someone you know has been affected by the current coronavirus situation and are unable to leave your home to attend a Megillah reading and would like to hear the Megillah in person on Purim, we will send someone to read the Megillah for you and your family outside your home.” In consultation with medical professionals and out of an abundance of caution, Chabad volunteers will keep a distance of 10 to 15 feet from the quarantined individual.

Celebrating With the Remaining Jews in China

Chabad of Hong Kong will hold a festive Purim party in the city’s commercial center.

Rabbi Shalom Greenberg, co-director of Chabad Shanghai in Shanghai’s Hongqiao area, returned to China to support the remaining Jews and celebrate Purim with them. He says that they’re celebrating Purim “as any other community in the world.” The only difference is that “instead of hundreds, we’ll be having several dozen people over throughout Purim, sitting apart from each other as a precaution, while wearing masks.” Not the traditional Purim masks he laughs, but “masks we’ve been wearing for the past six weeks.” The rabbi is sending mishloach manot to all Jews still there, and contacting community members around the world as the holiday nears, encouraging them to visit their nearest Chabad centers on Purim.

Some 660 miles north, Rabbi Shimon Freundlich, co-director of Chabad-Lubavitch of Beijing, will be reading the Megillah at the Israeli embassy since services may not be held at the Chabad center, which is on government property, where there has been a blanket ban on all public gatherings.

Both Freundlich and Greenberg will be reading the Megillah on the hour, every hour, for those concerned about exposure to others, enabling them to hear it alone. After speaking via livestream at Chabad of Brisbane’s Purim celebration in tropical Queensland, Australia, Freundlich will direct his focus closer to home, bringing fruit baskets and hygiene supplies—gloves, masks and hand sanitizer—to the overworked employees at the local Air China office, overwhelmed by their workload, as flights have been heavily impacted. “I sat in their office for three hours the other day,” says Freundlich. As he was leaving the office, he noticed the woman who had assisted him in tears, struggling to cope with the overload of cases. “I really felt for her,” he explains, “she was trying to do her job to the best of her ability.” The next day, the rabbi returned with 50 frontline hospital-grade surgical masks, a box of 100 surgical gloves and five pocket-size hand sanitizers, a token of his appreciation to the hard-working employee. Thinking about the rest of the staff, he resolved to return on Purim with more supplies.

In Hong Kong, which recorded the third death and more than 100 cases of the virus and has been financially rocked by the crisis, the main Chabad center is located in a residential area where there is strong resistance to gatherings of any kind. As a result, Chabad of Hong Kong is renting a number of venues to bring the joy of the holiday to Jewish residents. An upscale Sushi restaurant in the commercial district is being made kosher for a Megillah reading and party, and there will be a “Purim in the Jungle” event for kids at the Hong Kong JCC, says Rabbi Mordechai Avtzon, co-director of Chabad of Hong Kong and head emissary to China, who as remained with the community aside from a brief trip abroad to help raise funds for Chabad centers throughout China, which have lost virtually all their sources of income.

For those who have fled China, Rabbi Yekutiel Kalmenson, co-director of Chabad of Ningbo, in eastern China’s Zhejiang province, says that he and fellow emissaries are in close contact with their communities now spread all over the world. “We have community members who’ve gone to Thailand, to France, to Israel. We’re coordinating with friends and colleagues there to ensure they have a place to celebrate the Purim, the way it should be—with unbridled joy.”