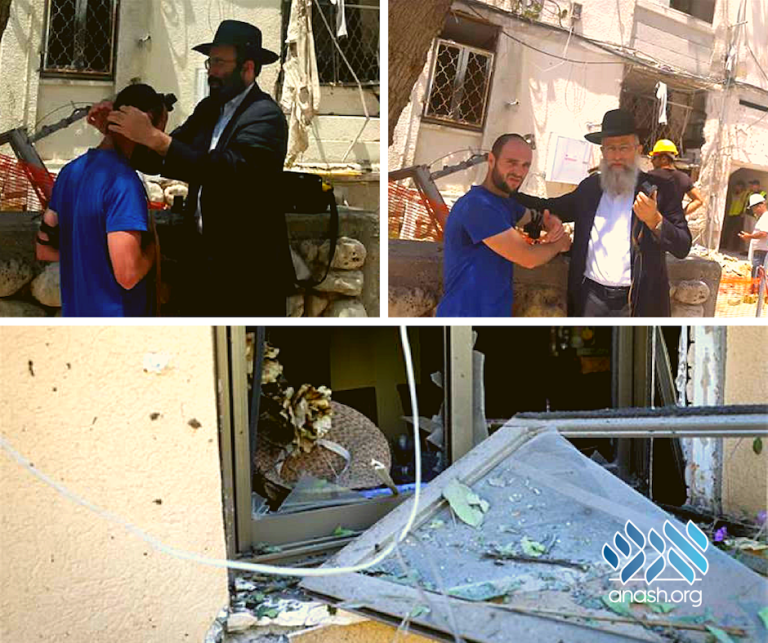 Despite the terror and danger, Shluchim are on duty, visiting homes of the victims and comforting the traumatized.

Although schools are closed and it is very much inadvisable to congregate in one place, all of the Chabad rabbis and staff are galvanized and visiting homes of traumatized families and children, doing activities in as many safe areas that we can cover,” Rabbi Menachem Lieberman, director of Chabad of Ashkelon, told Chabad.org. “As I write, we are being hit by several rockets, including a direct hit.” He said one of the missiles landed about 250 meters (273 yards) from his home.

At least two of the local Chabad emissaries, Rabbi Menachem Mendel Garelik and Rabbi Moshe Velenik, took to the streets to put tefillin on men during bomb-shelter breaks in a gesture of spiritual and protective support, Lieberman said, with others offering to affix on homes free mezuzahs to anyone interested. The cement factory that was directly hit is the site of a weekly Torah class given by Lieberman’s son, Rabbi Schneur Zalman Lieberman, he said.

The first fatality in Ashkelon, Moshe Agadi was killed when he went outdoors to smoke a cigarette between barrages of rocket fire that had been falling around the city throughout Saturday night. He was unable to return to his shelter in time when the next siren sounded.

The victim was well-known to Lieberman and the Chabad community, said Lieberman, who described him as “a beloved individual in the city. A friend of Chabad and many Jewish causes.”

Meanwhile, Code Red sirens could be heard sounding in southern Israel communities from the Beersheva area to the Gaza perimeter, Hatzerim and in the Bedouin regions, as the barrages of rockets continued. Despite the many hits and devastation, the Iron Dome air-defense system intercepted the vast majority of the rockets, Israeli Defense Forces reported.

Local Chabad-Lubavitch emissaries, including Rabbi Menachem Mendel Gurelik, above, took to the streets to put tefillin on men during bomb-shelter breaks in a gesture of spiritual and protective support.

Rabbi Moshe Zeev Pizam, director of Chabad-Lubavitch of Sderot announced that schools for young children in Sderot, as in other cities in the Israel’s south, also would be closed Sunday, and called for prayers and acts of kindness in support of those under attack.

As terrorists in Gaza threatened to increase the number and range of missile fire into Israel, the Israeli Defense Forces sent an additional tank brigade to the Gaza border on Sunday and prepared for fighting in the coming days.

The Israeli Air Force had already struck targets in Gaza, reportedly bombing the private homes of more than 30 Hamas and Islamic Jihad mid-level commanders throughout the Strip.Some of the buildings were housing weapons, the army says. Among the fatalities in Gaza was a Hamas field commander said to be responsible for receiving money for the group from Iran.

At a cabinet meeting underway Sunday afternoon, officials instructed the IDF to intensify the attacks against the terrorist organizations and to add to the forces around Gaza.

The Gaza health ministry said ten Palestinians have been killed since Friday, when two Israeli soldiers were wounded by gunfire near the border. A retaliatory Israeli air strike killed two militants from the terrorist Hamas group that governs Gaza, and Hamas and Islamic Jihad began launching rockets into Israel.

International negotiators are working to achieve a cease-fire.