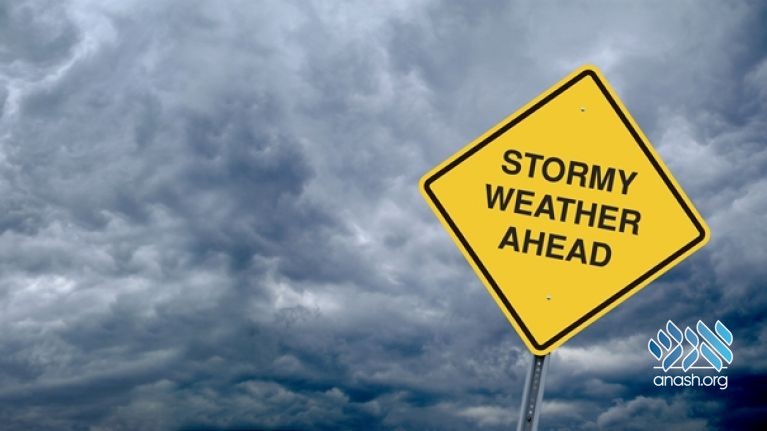 As Tropical Storm Barry approaches New Orleans, all local Jewish institutions have closed their shutters- with the exception of Chabad shuls.

Over the past few days, millions of New Orleans, LA residents have been glued to the weather reports, trying to assess the risk of approaching storm Barry. The shluchim are no different; in high risk situations, their first priority is to make sure their families are safe.

In the days before a hurricane hits, a feeling of panic sweeps through the city, propelled by dramatic media reports and weather predictions. Water, bread and canned food items fly off the shelves; within hours of the first inclement weather reports, large sections of grocery stores will become completely empty.

Amid the flurry of activity, the shluchim are busy checking up on the elderly and others in need of extra assistance; they ensure that they are safe and able to access any necessary resources.

It is Friday morning, and as the storm gets closer, decisions must be made. Is evacuation called for? Should minyanim be cancelled temporarily? Is it safe for people to leave their houses?

While Barry is expected to pick up strength and strike as a hurricane in some areas, the neighborhoods in which the shuls are located will experience it as a tropical storm. Though heavy rains are expected, the projected wind speeds are not considered dangerous.

Almost all local Jewish institutions have already sent out messages informing their members that they’ll be closed for the weekend. “All services are called off until further notice,” the emails declare.

After careful consideration, the shluchim determine that they can go on with their Shabbos plans. Chabad House Uptown, Chabad of Metairie, and Congregation Anshe Sefard will remain open, ‘rain or shine.’

“Services will be held as usual,” writes Rabbi Mendel Rivkin to his Chabad Uptown community. “We do encourage people to use common sense when determining the extent of their attendance.”

At Chabad of Metairie, preparations are underway for a community Friday night dinner. Many of those registered have already sent word that they will not be venturing out in the storm. In response, Rabbi Mendel Ceitlin sends out an email inviting those who will not make it to pick up food from Chabad before Shabbos.

As everyone around them prepares to evacuate or hunker down for the weekend, the 35 members attending tonight’s dinner look forward to the warmth they know they will find within Chabad’s four walls.