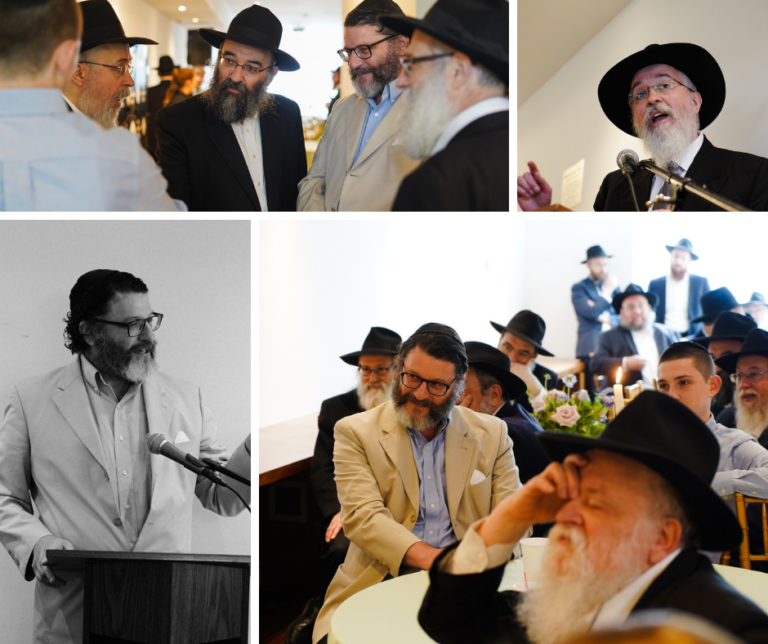 At a recent appreciation brunch, shluchim and supporters reflected on how the Shluchim Office has transformed the reality of many shluchim today.

The event was put on in recognition of the efforts of the many committee members, shluchim and friends who joined the effort to ensure the annual fundraiser’s success.

Committee members were joined in the Shluchim Lounge by many key supporters and shluchim. Rabbi Yossi Groner, head shliach to the Carolinas, was the MC of the event.

Rabbi Mendel Lipskier, head shliach to South Africa and member of Agudas Chasidei Chabad shared the sicha the Rebbe said 32 years ago upon establishing the Shluchim Office. He spoke of the joy of having been involved in the Shluchim Office from its inception, and the excitement of seeing it as it is now, after 32 years of expansion.

Rabbi Yosef Greenberg, the head shliach to Alaska and a member of the vaad of the Shluchim Office, thanked the Michelashvili family for their support. “Everything that is being done for Shluchim today by the many mosdos began here at the Shluchim Office,” he said.

Mr. and Mrs. Michaleshvili were then presented an award by Rabbi Gedalya Shemtov, the director of the Shluchim Office.

“I love supporting the Shluchim Office, because their dedication to the Shluchim is unmatched and literally fulfills a public request of the Rebbe,” Mr. Michelashvili said. “This is just the beginning, and next year we will double our efforts,” he added as the crowd applauded.

Mr. & Mrs. Meyer & Lilian Nigri, key founders and ongoing partners of the Nigri International Jewish Online School, were recognized for the tremendous work they continue to invest in the success of the school.

Rabbi Dovid Tamezgui of Beit Chabad Itaim in Brazil received a gift on their behalf. Before accepting the gift, he spoke about the Nigri family’s dedication to Jewish education around the world.

Rabbi Asher Federman, shliach to the Virgin Islands, has his own children enrolled in the Nigri International Shluchim Online School. It is one of many projects that the Shluchim Office provides to aid and further the mission of the shluchim, while enabling them to provide their own children with a proper chinuch. He expressed his personal thanks and appreciation to the Shluchim Office and to Mr. and Mrs. Michelashvili for their generous support.

Mr. Daniel Kestenbaum, who was recognized for his ongoing support, has traveled around the world, staying by many shluchim in exotic places. He related that he has personally seen how they benefit from services provided by the Shluchim Office.

Rabbi Groner brought the evening to a close by sharing how the Shluchim Office has transformed the landscape of shlichus challenges. As he so eloquently shared, this has enabled couples to go to places smaller and farther than previously thought possible.

“My wife and I received the Rebbe’s brachos to send our young children away from home,” Rabbi Groner shared. “That is what any shliach in arei hasede had to do. The Shluchim Office changed that and made life and shlichus so much easier for the shluchim and their families.”

The event was produced by Galia Bender, and photographs were taken by Avraham Edery.