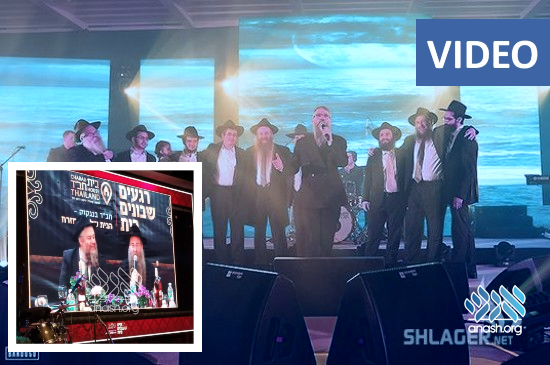 The yearly Chabad of Thailand dinner was missing very important individuals – the shluchim themselves. Nevertheless, they found a way to participate.

Chabad of Thailand’s annual dinner in Israel took place Wednesday in Eretz Yisroel. The shluchim themselves, however, were absent, unable to attend due to the ongoing coronavirus.

At the yearly gala held each year in Eretz Yisroel, hundreds of ‘alumni’ of Chabad Thailand gather with supporters to thank and salute the shluchim’s work with the Thailand Jewish community, visiting businessman and Israeli backpackers.

This year’s celebration was planned to be a grand event with the shluchim Rabbi Yosef Chaim Kantor and Rabbi Nechemia Wilhelm flying in from Thailand and with musicians Avi Piamenta, Yoni Schlomo, Meilech Kohn, Adi Gibson, the Yasis men’s choir and Yoni Eliav and his orchestra.

But plans changed when, just recently, the Israeli Ministry of Health placed a quarantine order on those who visited Thailand. The country has been seeing an uptick in the number of people infected, and wanting to stop the spread, anyone traveling from Thailand to Israel is placed in a two-week quarantine.

With the new developments preventing the shluchim from attending the dinner, the organizers still found a way for them to take part. The shluchim emceed the event via live video broadcast from their Chabad House in Thailand.

“We are prepared for any possibility,” said Rabbi Wilhelm, “but the panic is greater than the actual threat. We are in touch with many parents who called to find out about their children in Thailand and we are doing our utmost to help each one.”