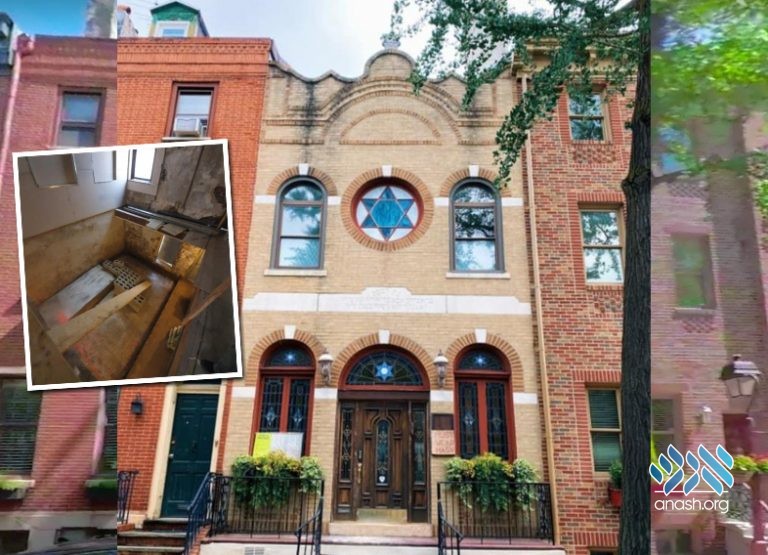 After nearly a century of functioning as a shul, The Vilna Shul of Philadelphia is being remade as a mikvah, the first one in the neighborhood.

You can walk almost anywhere in Center City, the bustling historic neighborhood in the heart of Philadelphia. But to get to a mikvah from the most walkable neighborhood in one of the most walkable cities in the United States, you’d have to drive at least 30 minutes, walk to and take a commuter train or ride a series of public buses that would lengthen the trip. That reality has meant that access to this keystone of Jewish family life was a time-consuming endeavor for hundreds of Jewish women who live here and don’t have a car.

“Even for people with good intentions, the distance to the nearest mikvah is a big deterrent,” said Rabbi Menachem Schmidt, who co-directs Lubavitch House of Philadelphia with his wife, Chava, and is the leader of the historic Vilna Synagogue in Center City.

That’s why the Schmidts—and their community—have made the bittersweet decision to give up their sanctuary for use as a mikvah. The synagogue will live on, although prayer services will move to a multi-use space in a higher floor of the building and will only take place in the daytime, to allow for the privacy crucial to mikvah observance. Evening services and study will move to another synagogue nearby.

“This will change the way that Center City operates as a Jewish community,” says resident Molly Weinberg. “It’s an opportunity for thousands of women who would have to travel or haven’t thought about using the mikvah because if they don’t know about its importance, it’s easy to say ‘it’s too far.’ ”

“Now that it will be in the neighborhood, it’s a no-brainer.”

The Vilna Synagogue, which was established in 1904 and has occupied the same building for the past 98 years, has long been a familiar address for Jewish people of all stripes. “This is a non-judgemental and welcoming place,” said Schmidt. “People comefrom all the local synagogues to join our kiddush after services—or if they don’t come to services, they’ll stop by.“It’s a gathering place for the community.”

And as demand grew for a mikvah to serve Center City’s growing community of young Jewish families, the congregation realized what had to be done. With space at a premium in the heart of downtown, it had one option.

“To buy a property would have doubled the price of the project,” said Schmidt. “This made it possible. And with what the sages say about the mikvah being a priority, it was clear what had to be done.” Indeed, the Talmud (Megillah 27a) states that having a mikvah in a Jewish community takes precedence over having a synagogue.

In explaining the mikvah’s importance, Schmidt quotes the teachings of the Rebbe who launched the global Mikvah Campaign in 1975. “It is an endeavor which literally saves lives,” the Rebbe wrote (Hayom Yom, 10 Nissan).

“I’ve been praying in this synagogue for 30 years,” says Schmidt. “It’s my personal place of spiritual refuge. So this is bittersweet for me. But what the Rebbe says in Hayom Yom about mikvah, it’s crucial; it’s vital.”

True to the nature of the synagogue it will displace, the Center City mikvah, which will be known as Mai Shalvah, or “Restful Waters,” will be very much a community facility, serving people from many local synagogues, as well as those not affiliated with any particular organization.

The ongoing COVID-19 pandemic brought its own challenges to the construction of the mikvah, which was suspended for two months at the pandemic’s zenith, as well as the ability to reach out to people and have fundraisers. But Schmidt sees a silver lining.

“One of the things that COVID-19 has done—one of the only fortunate outcomes of this pandemic, when the home situation is healthy—is that it has made people stay home and focus on family,” he says. “This has created discussions about the mikvah that are very important.”

In terms of health and safety for the mikvah itself, the community has made it clear that they will be following the CDC’s guidelines and precautions, including staggering visits and sterilizing the premises between uses. “I myself leave the house once a week to go to socially distanced prayer services wearing a mask,” says Schmidt. “We are very careful here, and this mikvah will be operated very carefully. This is not something we will be playing with at all.”

But even with the limits on communal gathering, the sense of communal unity that the mikvah has created is palpable to many.

“This is directly impacting thousands of people and forever changing the Philadelphia Jewish community,” said Weinberg. “I’m so honored that I’m a part of this.”

Center City’s community mikvah, Mai Shalvah, is in the midst of a 24-hour campaign to raise the balance of the funds needed to complete construction. To join in the building of this historic addition to Philadelphia, visit the donation page at www.philamikvah.org.